disjointed, anticlimactic, and hard to understand, much like the average jazz trumpet solo 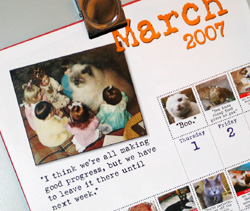 ♣ Last month went by incredibly quickly -- I don't know why but it really felt like the month was two or three days shorter than normal. Despite this, I was able to remain my usual productive-BU self, as personified by Mike Catania in this guest post from 2004

♣ Among my accomplishments for the month of February, I wrote two new songs, hosted two poker games, took off five days from work, painted and carpeted one room and a hallway, refloored one foyer, met three new people, went on two dates, beat two video games, finished one project at work, read four books and half a book of short stories, took care of four cats, washed the car once, shoveled the driveway twice, installed one gate in Anna's house to protect her progeny from being eaten by a cat, and saw four movies. Then in week two... 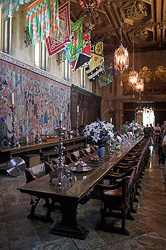 ♣ This month's plans mostly involve renovating the living room and kitchen of my house, which means that they'll be in various stages of disarray throughout the month. Currently (thanks to the great help of a retired dad who might as well have a spackle tree growing in his backyard) the walls are shored up, smoothed out, and ready for sanding and a smattering of NOUGAT-coloured paint. By the end of the month, the entire top floor will have new carpet, and the kitchen will have fake hardwood floors (see artist's rendering of what my dining area will look like when it's all done).

♣ Besides the home improvements, I'd also like to start writing my will before my inevitable assassination by NASA for implying that we may have faked the moon landing, and take some online courses through the program at work.

♣ Our company is now using some program called Skillsoft, which is a collection of thousands of online courses to be taken at the leisure of the employee. Performance managers are always getting their panties in a knot over whether employees are forward-motioning their careers or gaining psychic growth, but the training budgets are never actually big enough to send everyone to the highly educational Java seminar in Hawaii.

♣ Personally, I'm a big fan of online courses, because it allows me to work at whatever pace I feel comfortable, without worrying about attendance grades or falling asleep in class. If you were to tally up all the non-A's I'd ever earned in my college career, I bet that 80% would be attendance-related. I got a C- in a speech class at Northern Virginia Community College because I did all the work but skipped three classes, and a B- in some combinatorics math class with no real-world applications that consisted of endless quizzes about how many different ways you could stuff pigeons into pigeonholes. 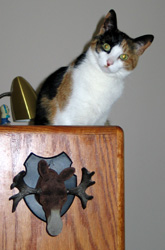 ♣ Had those classes taught me how to stuff pigeons instead, I surely would have attended on a much more frequent basis. Pigeon stuffing is a crucial life skill. Bonus points to anyone who knows where this poem came from without looking it up:

On registration day at taxidermy school
I distinctly saw the eyes of the stuffed moose
Move.

♣ Speaking of poems, there are only two days until the deadline for the "Write My Lyrics" contest

, and I've only received two entries! Surely you don't want to miss out on the quintissential American Idol of song lyrics and the fame that goes with it. Submit your lyrics by Sunday! I will probably post the entries for voting on Monday.

♣ Also on Monday, Kathy and Chris return State-side from their jaunt through England which means I'll relinquish custody of the gay kitty brothers, who have been constantly harassing Amber and Booty since last Monday.

♣ Today is Mike Sharp's birthday, and tomorrow is Dave 'Jackpot' Miller's birthday. Happy Birthday! Have a great weekend, everyone!

Why buy a satellite when you have a wok?