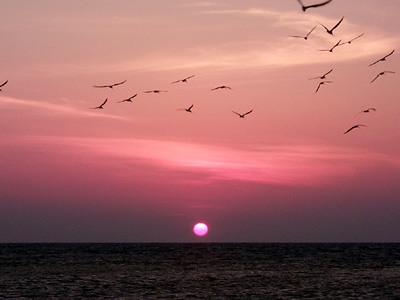 Six years ago when I was pretending to learn about composing in Florida, I would open each weekend by visiting a local nature preserve or state park. One of my earliest trips was to Marsh Sands Beach, a small east-facing beach on the Gulf of Mexico that was just fifteen minutes outside of Tallahassee (a straight shot down one of the main roads). Although this beach would ultimately be remembered for the low-tide island I claimed (Briland

), watching horseshoe crabs hump, or training Chompy not to be crazy, in the beginning it was just the perfect place to catch the sunrise.

I normally wouldn't give a rat's ass about sunrises, and I'd be one of the last people to scale Mount Gobacktobed just to watch a sunrise at any other time in my life, but there was something very unique about having my own personal ocean sunrise in my backyard, surrounded by all manner of flora and fauna. 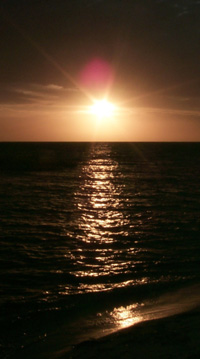 More and more often as the months went by, I'd wake up at 5:30 on Sunday morning just to catch another sunrise and walk barefoot on the beach. I remember the time a large bouquet of plastic red roses had (quite poetically) washed ashore

, and the time I stumbled across a couple of high schoolers asleep on the beach (apparently having spent the previous night doing some beachbum canoodling). 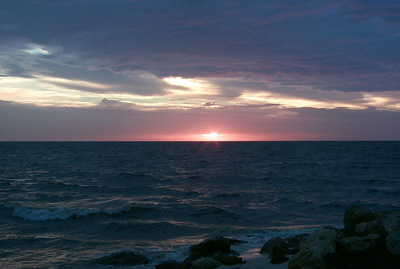 Of course, there would always be obstacles between me and my sunrise. Since every road between Tallahassee, Sopchoppy, and Doubleyoutieffasaki was barely more than a dirt road, I often got stuck behind local dairyfarts driving fifteen miles per hour in their '80 Dodge Darts, missing the sunrises by mere minutes. Anyone who has ever seen the sun crest the horizon in a kaleidoscope of artistic synonyms knows that it's not quite the same if the sun is already up when you get there. Despite these hurdles, I had plenty of sunrise shots (including the ones you see here) stored away for the memories by the time I left Florida two years later.

On my last sunrise trip in April 2003, I brought Booty along with me in a carrying case. I was getting her accustomed to riding around in the car so she could take her first road trip back to Virginia in a couple weeks' time.

Booty didn't give a rat's ass about the sunrise so we went home.

Don't let grandpa get away with it