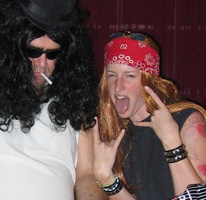 Congratulations to Kathy Biddick Smith for correctly guessing six of the ten bass lines in last week's Name That Tune contest! Runner-up was Anna with four -- each of them will receive a gift certificate to Amazon.com for $10 and $5, respectively.

The table below contains the original bass lines as well as a sample of the actual song. Highlight the super secret invisible column to read the correct answers.

I believed that #1 and #2 were gimmes, and that #3, #4, and #7 were the least likely to be discovered. Apparently there was conspiracy and intrigue surrounding #5, as my researched information put it five years earlier than it was actually released. This would have pushed it into this decade rather than the 90s. Because of this blatant skewing of the contest, I'm giving everyone who entered the contest one extra point. Thanks for playing!

So what should my next Audience Participation Contest entail?

Germans in an uproar over zookeeper's cuddly Knut.