Maia has a stuffed animal that sings different songs when you press its paw. The repertoire is a mix of nursery rhymes as well as some brilliantly composed original music that was clearly not written by any guilded composer:

Apparently the creator of this song couldn't think of a final line to the song and allowed it to sway gently to completion with MIDI flutes. As if that weren't bad enough, the Morning Song is part I of a three part opus:

Why are the birds singing to the afternoon? Why is the MIDI accompaniment devolving into Ives-meets-Skrillex-like drum machine chaos? Don't think about it too hard because EVENING IS COMING:

Though Violet is thankfully not cloud-enabled, you can initialize her to know the baby's name and a few facts about her. This song about Maia makes me glad we didn't name her Josephine:

What have you been doing with your life? 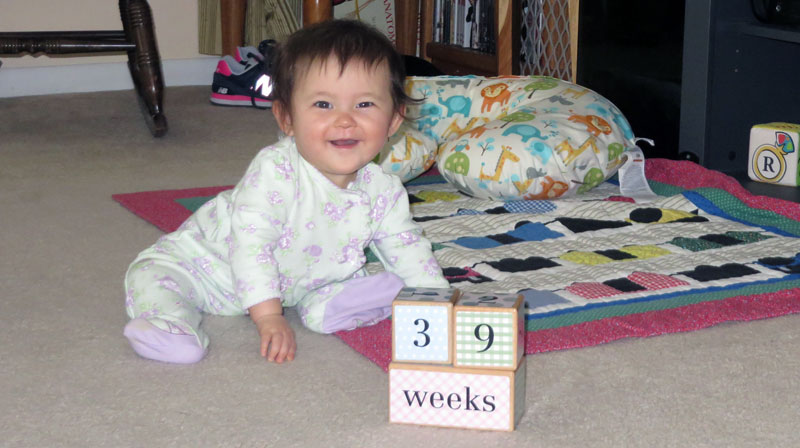 Maia has made it to 9 months on the dot, so she's been out almost as long as she was in. Over the past two weeks, she has perfected her army crawl which is mainly an elbow-based method of mobility. She can also open bottom drawers and pull herself up on them (though she can't get herself from a crawl to a sitting position yet). Lastly, she makes clicking sounds with her tongue constantly like she's learning a tribal language.

To stay one step ahead of her, the house has slowly been baby-proofed. Outlet covers have been on since Ella came over to visit in 2007 so that was a no-brainer. The stair gate went up in early March and strategic barricades have been erected between her and various power strips or oily treadmills. I also installed a stove anti-tip brace, TV anti-tip straps, and carry-out dinner anti-tip protection. I'm currently going room by room to anchor top-heavy dressers to the wall.

This weekend, we're taking her up to Rhode Island to visit her 3 cousins. Our 90 minute direct flight to Providence feels like it will be easy mode compared to LA, and the presence of young kids up there means we can travel with mostly just the clothes on our back! 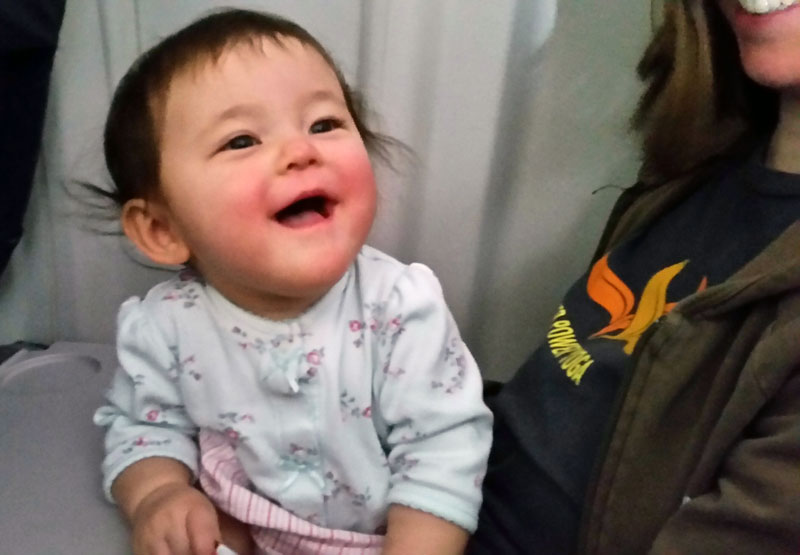 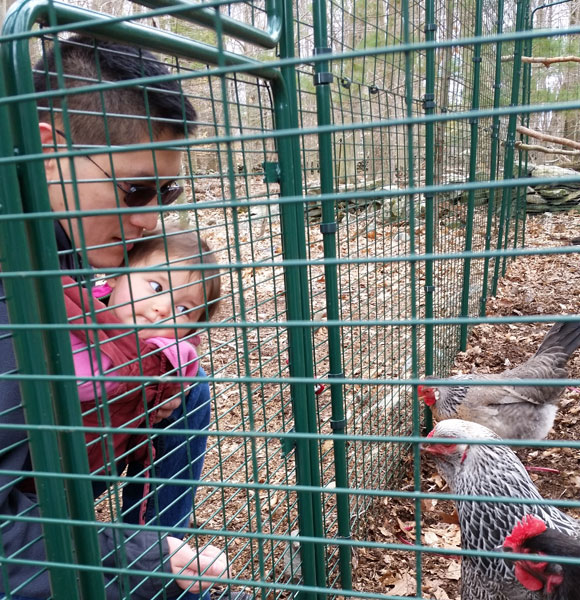 Introduction to Chickens: A Survey Course 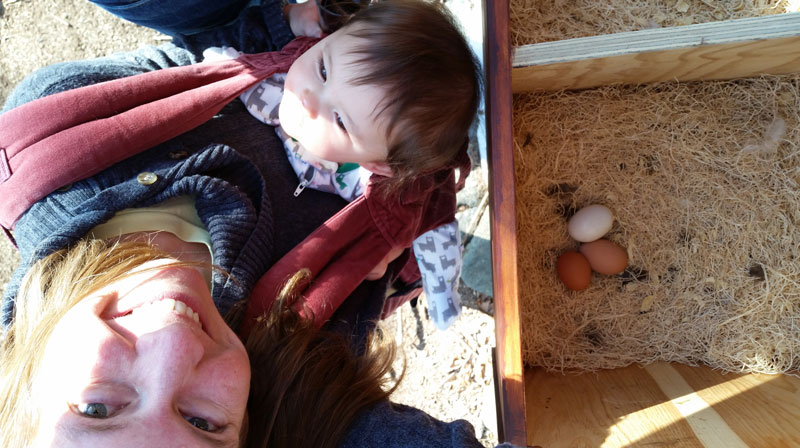 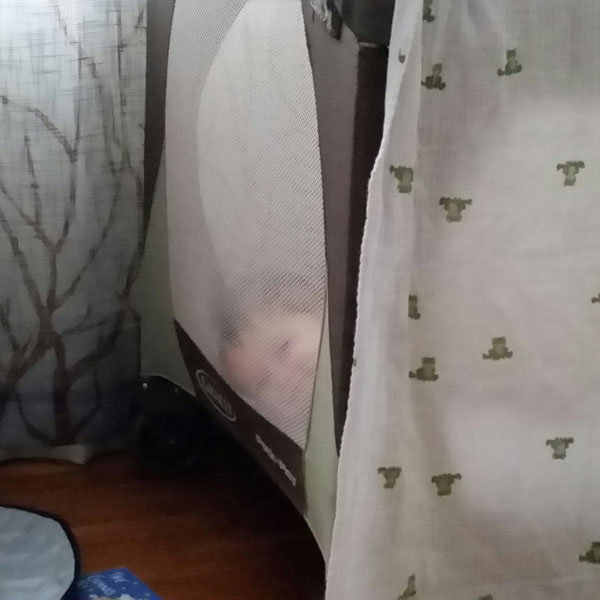 Pretty sure this travel crib is haunted. 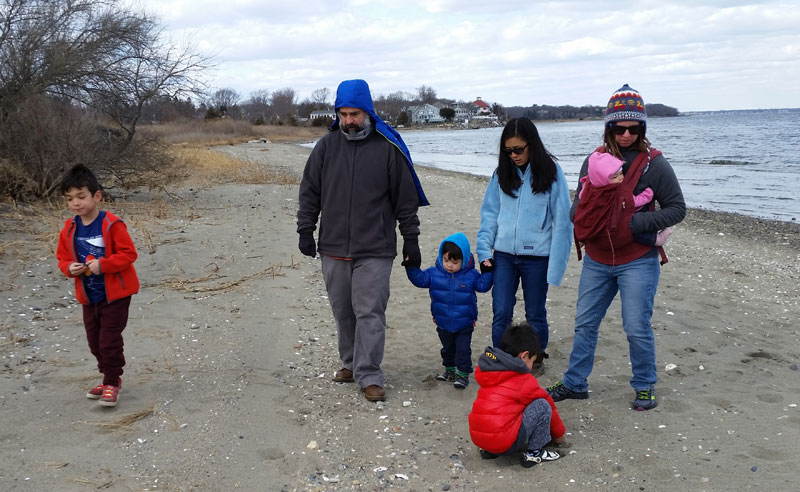 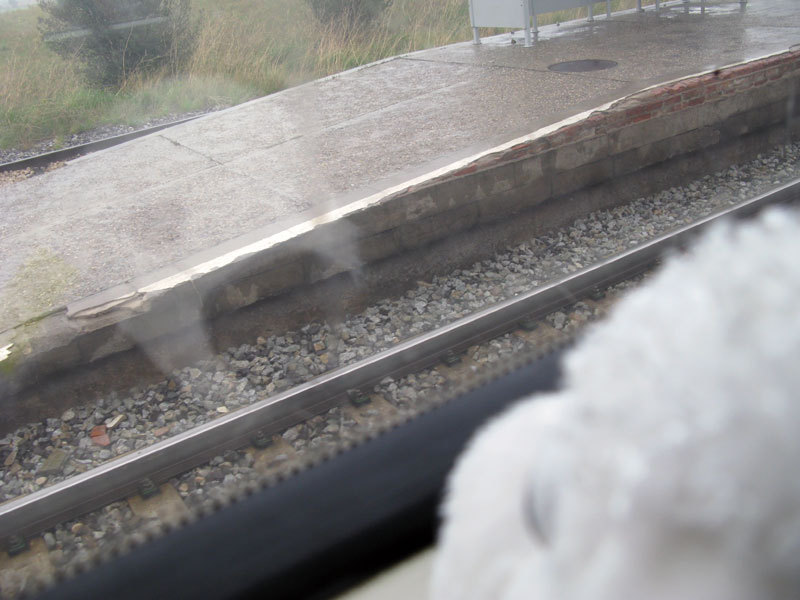 Rebecca and I were on our first trip to Europe and April 11 was a cold and rainy travel day. After leftover quiches in our room in Collioure while watching Melrose Place, we got on the train to Barcelona. Accompanying us was Pierre the French Dog, who we purchased for Anna's 1-year-old, Ella, and who we took pictures of all over Europe to make a little story book.

Pierre got really bored on this train because it turned out to be a regional train that stopped in every tiny border town south of France. When we finally arrived at the Sants train station in Barcelona, no one knew where our hotel was. It turned out to be another hour outside of town, requiring a long commuter train and 10 block walk to reach. When we arrived at 6 PM, it was nowhere near Spanish dinner time, so we got a box of wine and assorted crackers and breads from a local convenience store and crashed in our surprisingly swank hotel room. 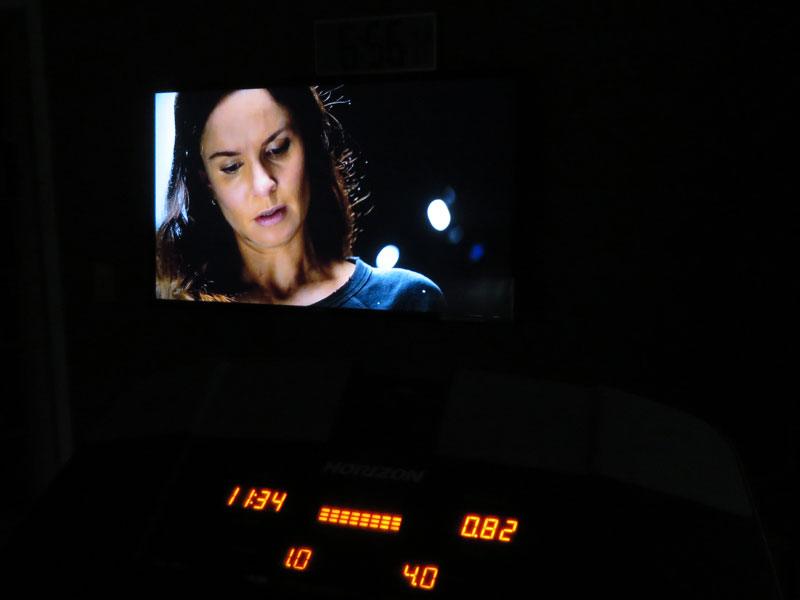 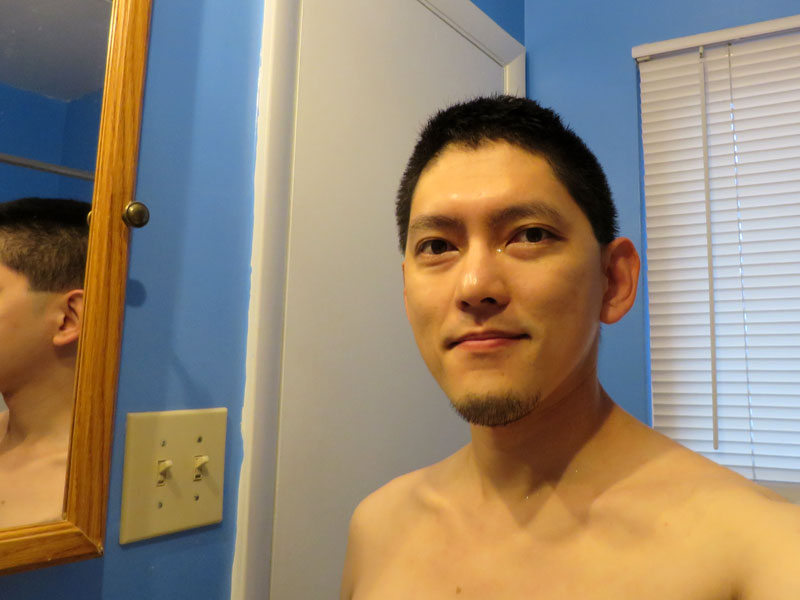 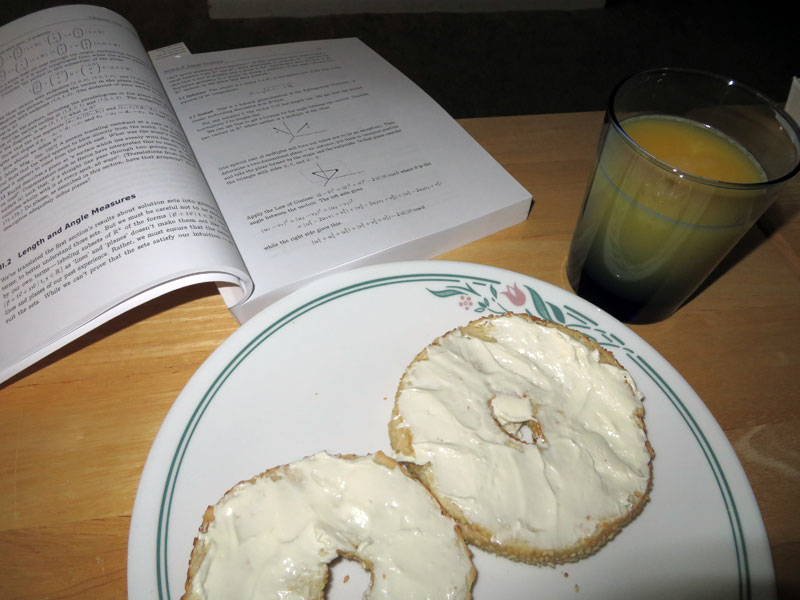 9:09 AM: Breakfast over a thrilling chapter on linear geometry. 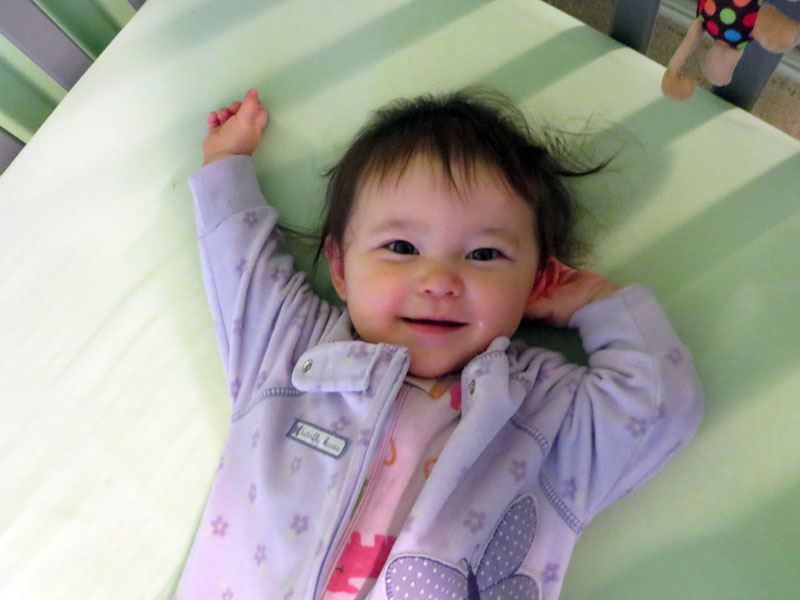 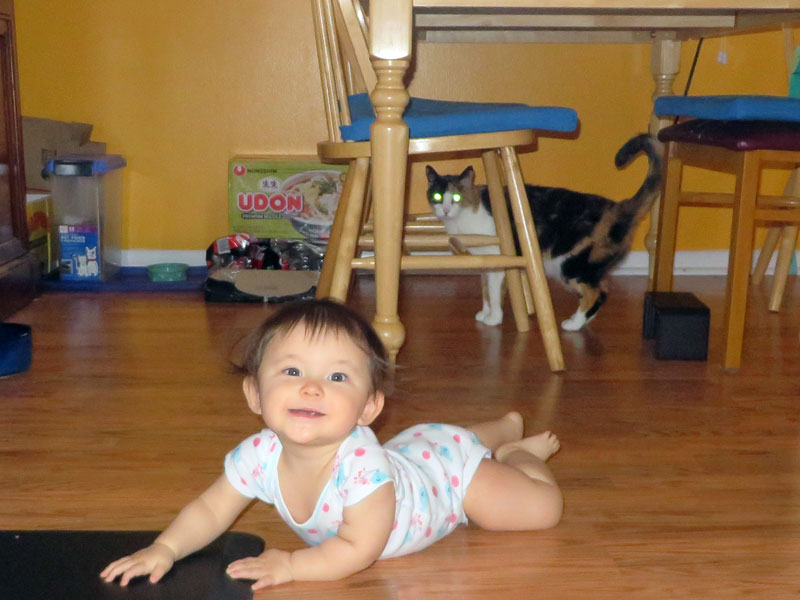 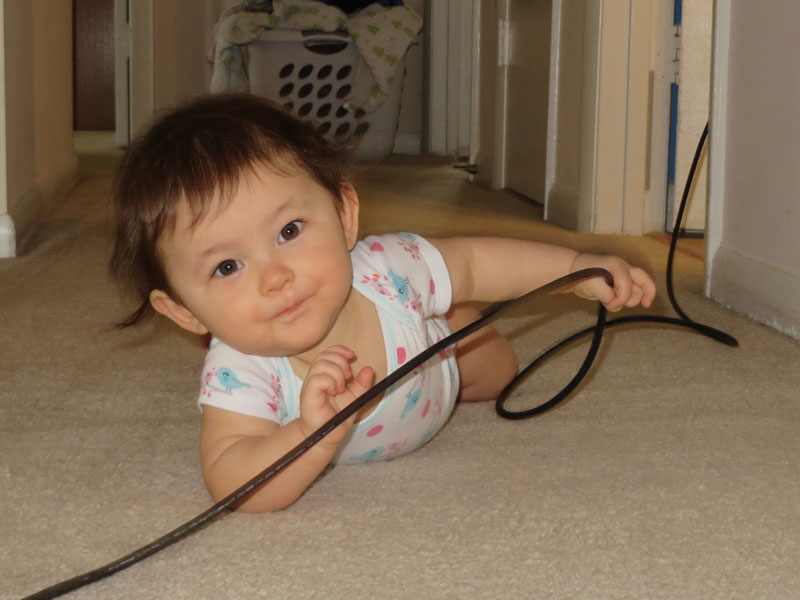 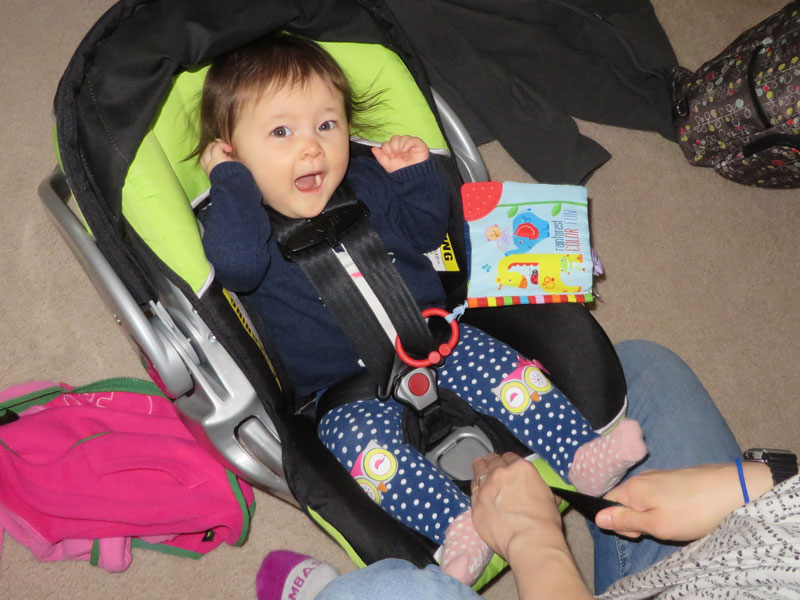 10:51 AM: Off to library story time though she'd rather be writing new age music (she's a little yawny). 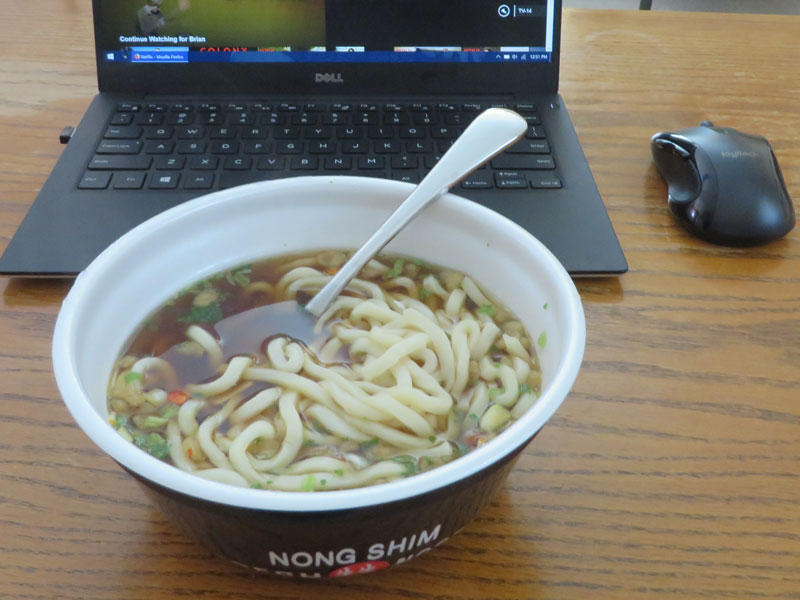 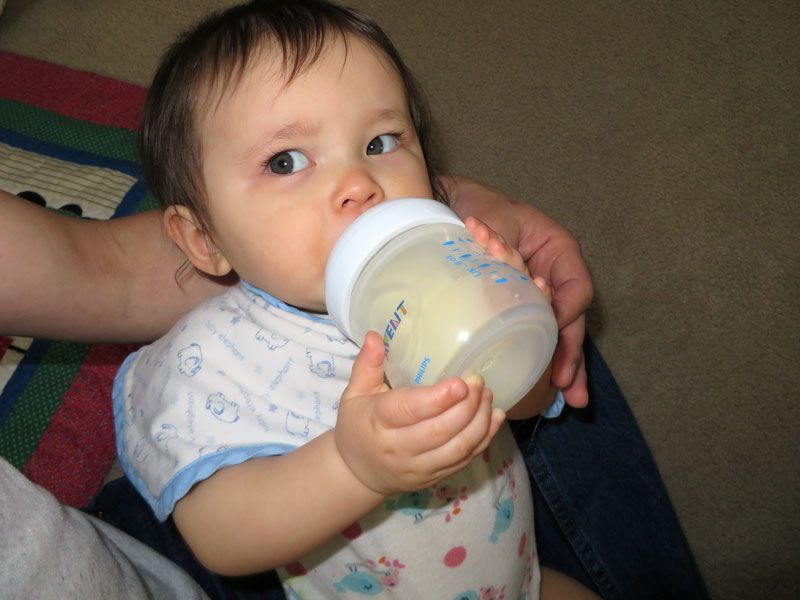 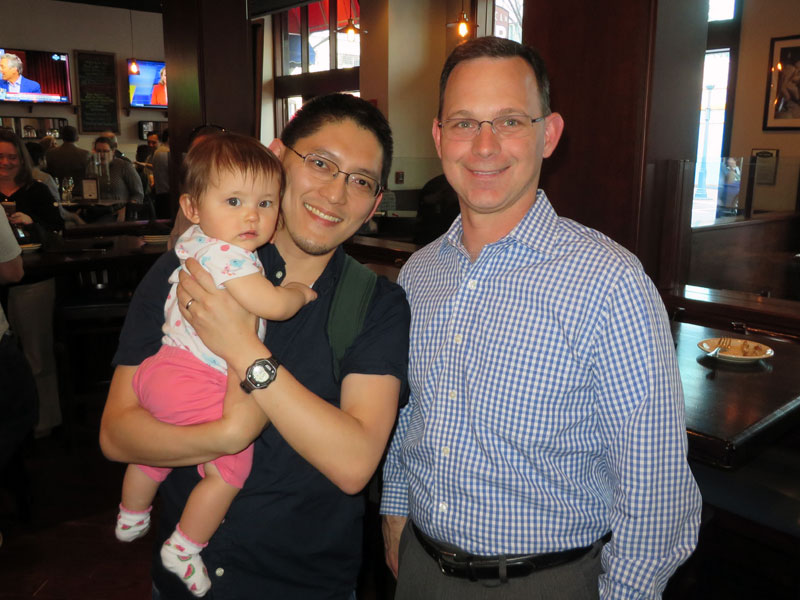 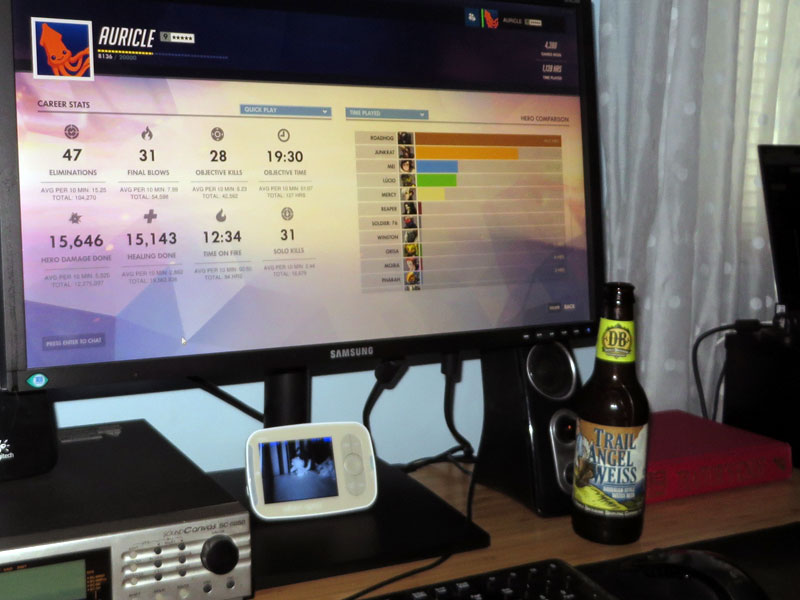 6:16 PM: Second nap is game time, although the inmates have figured out the effective range of the camera in the yard. 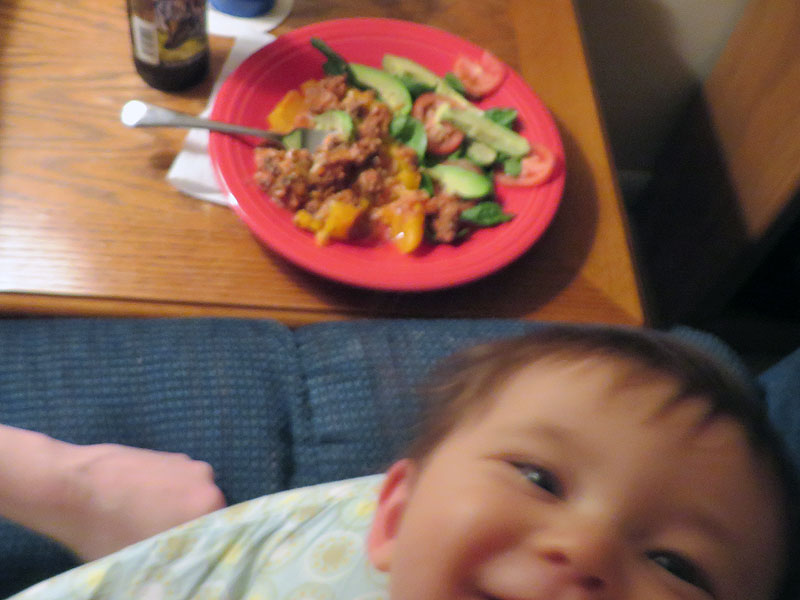 Assassin's Quest by Robin Hobb:
The final book in the Farseer Trilogy outstays its welcome by being longer than the previous books but with less going on. What's sad is that there is a very fulfilling conclusion in the final pages of the book, but it feels almost like an afterthought. If that section had been expanded upon and the previous, repetitive sections of people walking somewhere and being sad had been trimmed by a good 25%, the book would have been much more satisfying.

The Joel McHale Show with Joel McHale:
This is a fairly silly show (with one new episode released every Sunday) in which Joel McHale makes fun of clips from various reality TV shows and random famous guest stars stop by to do amateur skits and plug their new shows (essentially a reboot of The Soup from the E! network). The humor is hit-or-miss and the skits generally fall flat, but there are just enough hilarious clips to make it worth a watch. Free on Netflix.

Black Mirror, Season Four:
The problem with this season is that there aren't enough new, thought-provoking ideas to build episodes around. Instead, this season felt more like the writers were exploring "What if we told other stories in the same worlds we had already created?" Over half the episodes dealt with the concept of the "cookie" that contained a person's consciousness, which is fine, but something we already explored in earlier episodes. The episode, USS Callister, is probably the best mix of fun and horror, and Metalhead is easily one of the worst episodes ever created. Free on Netflix.

Colony, Season Two:
Perhaps I'm spoiled by quality shows with shorter, complete seasons (like Fargo), but I find Colony to suffer from a plodding, network pace in which new plot information is methodically spoonfed to allow for the show to possibly carry on for years. If the plots of the first two seasons (26 episodes) had been compressed into a single 20-episode season, it would be much more compelling. As it is, I worry that the show is going to pull a LOST on me (a real danger since the creator of LOST is also the creator of this). Free on Netflix. 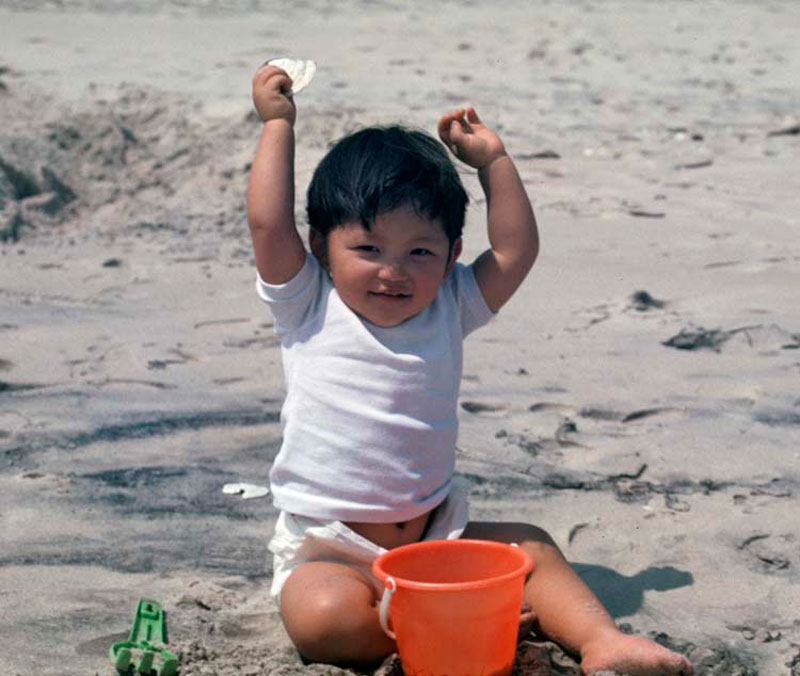 I am 2 years old and sitting on the beach in Ocean City, Maryland, according to my Dad, the historian. I don't remember being in Ocean City at all as a kid, and spent a good portion of my 20s and 30s dismissing it as a poor man's Outer Banks. Based on my 2017 visit for our Babymoon, it kind of is, but there's nothing wrong with that if that's what you need for a long weekend! 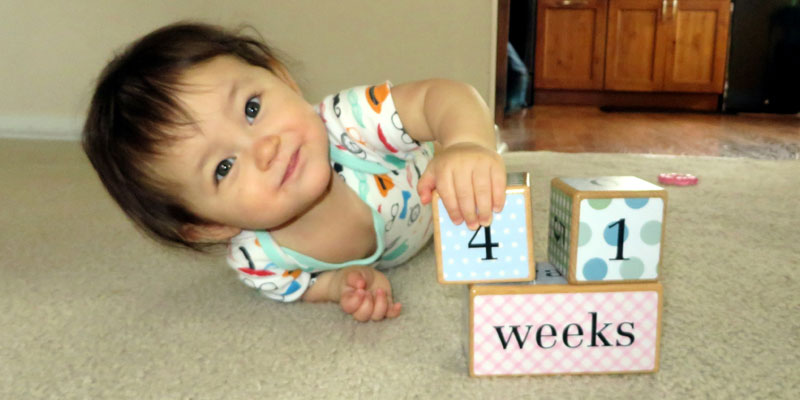 Maia is 9.43561 months old and oscillating around the 16 - 17 pound range depending on the distance between the Earth and the Moon. She is an adept crawler now, capable of closing the distance between rooms fast enough that I no longer bother picking her up when I move to another room myself -- she'll be by at her leisure. Everything tippable has been bolted to the wall now, so each room has about a 2:30 minute buffer where I'm comfortable turning away momentarily without the fear that the house will explode in my neglect.

Maia can also get back into a sitting position after crawling now, which is super cute but also makes naps take longer to begin. The crib has transformed from a place where there isn't much to do besides lie down or roll around and eventually fall asleep, turning into a place where sitting up now gives fresh new vistas of the room at large.

It has been warming up gently over the past couple weeks and we made it to the park once this week. The pond was a bust because of a hostile set of geese defending nests but Maia seems to remember the park and enjoys being outside. Rebecca is gearing up for the annual farmer's market circuit as well, which will allow Maia to get unrealistic perspectives on local commerce while Rebecca gets weekly nitro ice cream.

Maia also learned to drink through a straw after just one demonstration. 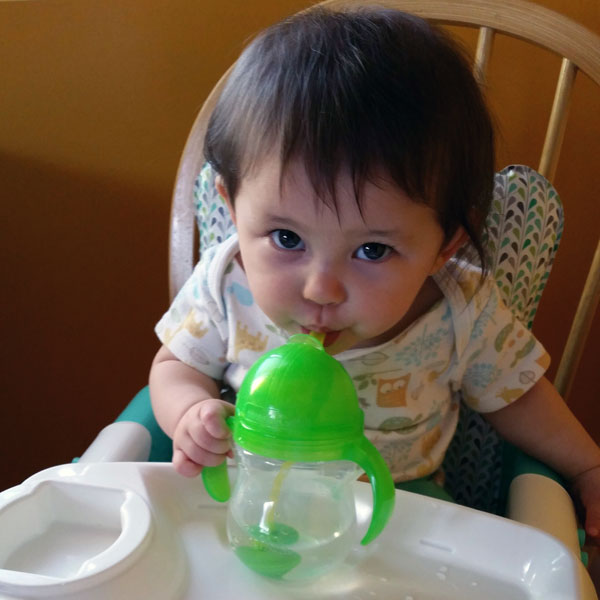 Stuff in My Drawers Day: Scouting in Alexandria

Back in 1993 when local cable access channels were still a thing and Jones Intercable had not yet been bought out by Comcast, the show, Scouting in Alexandria was featured in an article in the Alexandria Gazette Packet. 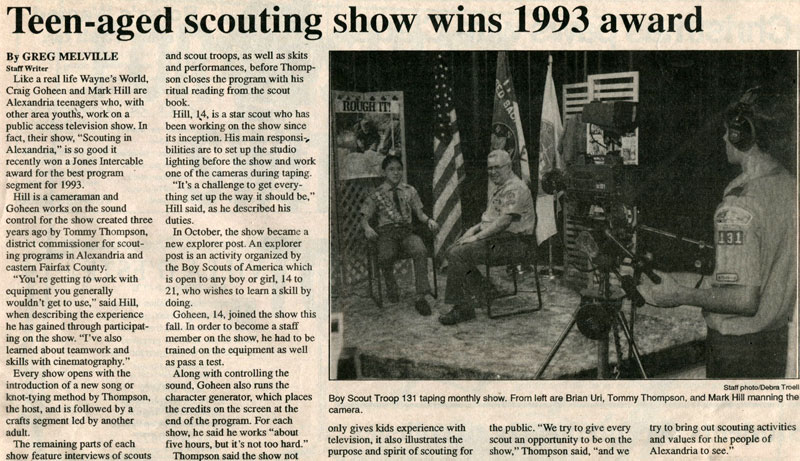 I did very little with this show other than to get interviewed once about my Eagle Scout badge although I did attend a few editing sessions when it was an "Explorer Post", turning knobs and splicing VHS tapes like a pro. This participation gradually petered out after I couldn't find anyone willing to give me a ride to the studio on a regular basis.

thrilling emails received on this day in history


Following five years of work and fifteen months of hype, the URI! Recital is the most anticipated event in the history of mankind. With ten original compositions performed by twenty-three musicians in a room that holds two-hundred and fifty-two people, the URI! Recital will be the biggest ninety minutes of your lifetime.

Since it's the halfway point to a long musical weekend, you can pre-game by attending Peter Schatz's senior trumpet recital on Saturday afternoon, and the New River Valley Symphony concert Saturday night. Cool down after the recital with a faculty concert Sunday night, and the VT Brass Ensemble Monday night. Attending this recital will aid in the liberation of starving musicians all over the world.

Co-sponsored by "Hubcap" and Delta Mu, the non-service music fraternity.

"I would have graduated a long time ago, but I wanted to stick around just for this recital." - Joe Tornella

"I'd endorse your recital, but I don't think anyone remembers who I am anymore." - Matt Hackwerth

"Brian Uri! puts the 'Asian' into every 'occasion'." - Chris Lee

"This recital is going to Make a World of Difference." - Ben Nelsin

I abused multiple listservs to get the broadest dissemination for my undergraduate recital.


Please accept Elizabeth's Practica Musica file. I was supposed to send it for her this morning when I woke up b/c she did not know how to do it herself. I didn't wake up till 8:30. I am so sorry about the late sending.

I totally accepted this late submission even though Elizabeth should have known how to submit her own file in the LAST WEEK OF THE SEMESTER. This is probably why I got such great evaluations on my ear-training / sight-singing class.


I am not making any recommendations (not allowed to do that) but I think from a personal point of view that your cheapest and least time consuming route maybe throwing more physical memory at the problem. You are currently only running 4GB. Total slots = 6. Believe that it is only using 2. (Unsure of this without doing a physical check).

There was a time when our work project had amazing onsite system administrators who would proactively identify problems and work with us to correct them before they affected the end users. Within five years, they had all been replaced by entry level staff who thought that racks only occurred on women and in dishwashers. Also, 4 GB of RAM seems like a rather small allotment for a webserver serving the entire Department of Defense.

For everyone who wants more baby pictures. 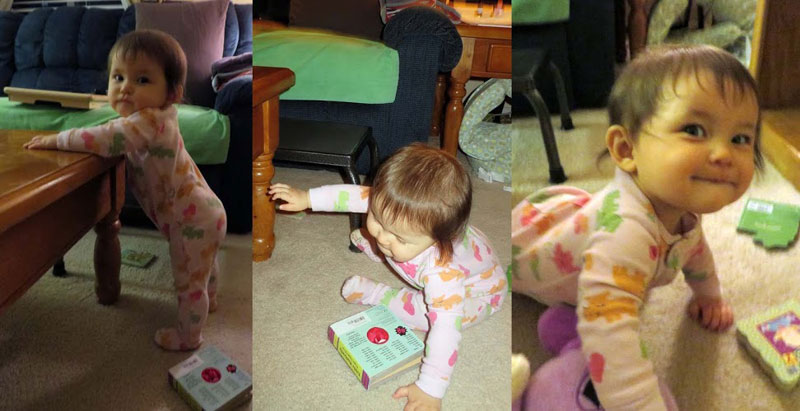 This week, Maia pulled herself up onto our low-rider coffee table (by way of an even lower footstool). It lasted mere moments until she tumbled down, unphased and instilled with a sense of pride and accomplishment. 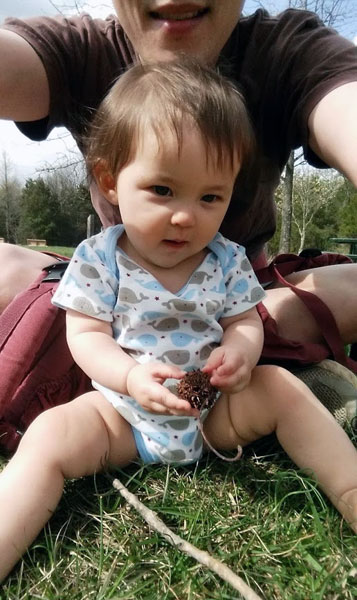 This is Maia sitting in the grass at Claude Moore Park, performing science experiments with sticks and gumballs. The temperature that day was a pleasant 72 degrees. 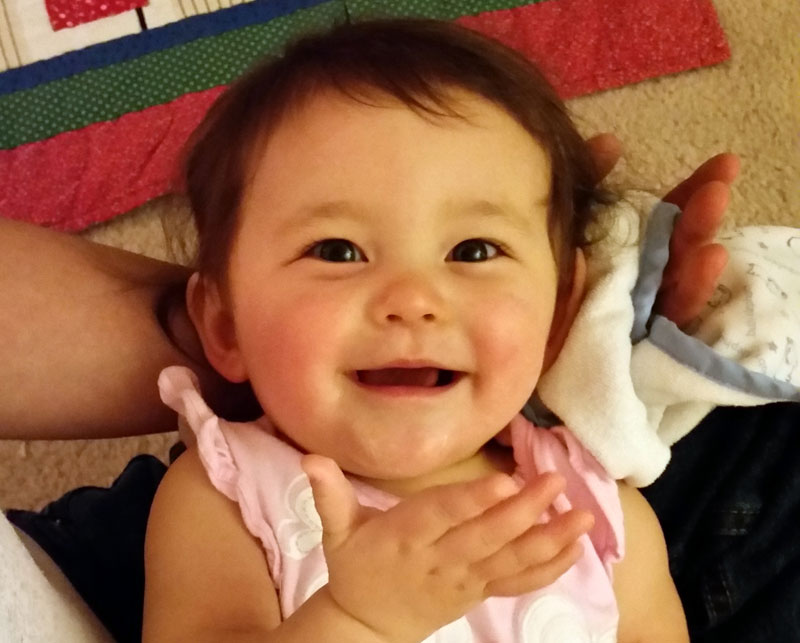 April's Final Grade: C-, spent most of the month sick!