Friday night was Movie Night, and the entirety of Sterling was in the local Blockbuster, stocking up on movies before the imminent 3 - 8 inches of snow. We had authentic Irish cuisine from a little pub known as McDonald's (son of Donald in Gaelic) and watched American Dreamz, a parody of both American Idol and George W. Bush which tells the tale of a suicide bomber who gets on the show in hopes of assassinating the President who will be a guest judge in the final round. The movie was entertaining enough, if only to see "The Impossible Dream" from Man of La Mancha choreographed to a bunch of 80s dance movies

By Saturday morning, there had been less than an inch of snow accumulation so I went shopping in preparation for a St. Patrick's Day feast. My normal mashed potato supplier was not available, so I had to make due with a local ghetto variety which came in little milk cartons with hand-edited cooking instructions. It looked as if someone had applied white-out to the back of every single box. 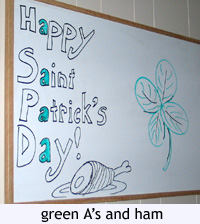 Dinner consisted of six pounds of corned beef, four pounds of cabbage, seven cups of sour cream and ghetto mashed potatoes, a bottomless fount of Guinness, and sugar cookies. Post dinner talk centered around Kathy and Anna bemoaning the difficulty of the Name That Tune contest (which has a deadline of tomorrow at noon, so get your entries in!).

After dinner we played a rousing game of Balderdash, where it was discovered that a zopilot is a three-legged mammal that can both swim and fly (shown in its natural habitat below). Also, it is illegal for a cow to be in a hamburger in the state of California. 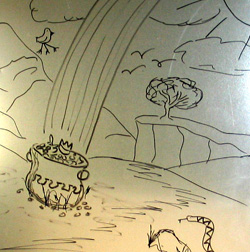 Sunday was "Recarpet the Stairs" Day, and efforts went quite smoothly and quickly. In the evening, Anna and I finished watching the fifth season of 24, which was definitely the best of the first five. Now she's allowed to have her baby, since it will no longer interrupt our TV-viewing schedule.

Today, I've taken off work to finish the carpeting job -- the living room gets its turn and will hopefully be as easy as the stairs were. I also seem to have caught a slight cold and an earache/blocked-ear sometime in the night, neither of which is conducive to enjoying the day. Don't you hate when one ear feels so pressurized that it might explode, but you can't equalize the pressure through the usual nose-plugging remedies?

In other news, I expect a visit from the Secret Service any minute now, since I managed to use multiple terrorist buzzwords in a single post!

Everyone does CPR wrong

Finally, something good about being old..