Bad Santa is the most bitterly cynical movie I've seen in a long time. Starring Billy Bob Thornton, Bernie Mac, and John Ritter, it tells the story of a foul-mouthed alcoholic and his midget friend who works as a mall Santa each year, and then robs the mall on Christmas Eve. I thought it was great but you may not if you have any piety for the holiday season. There are no deep meaningful messages or parables, but there are some incredibly funny scenes. If you too are cynical, you will like this movie.

Mega Man Anniversary Collection is on sale at Target for $26 through Saturday. It contains the first 8 Mega Man games from the 80s and 90s, and is a great port although you can't remap the rather strange control scheme they devised (B is jump and A is shoot, contrary to every video game ever made). I only played a couple Mega Mans as a kid, but I remember them as incredibly frustrating but continuously addictive.

What's the point of being blind if you can't grope women?

Them negroes sure can drive fast... 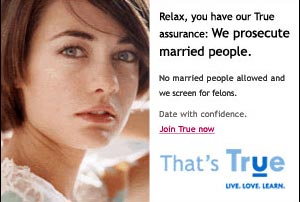 This ad was on the Weather Channel's forecast page yesterday. All you married people better watch out!

Last night I started tearing out a door frame and shelves to create a bar in my basement. The door frame (which was peculiar to begin with because there was no door or room associated with it) was much easier than expected to remove, because it was hollow underneath the trim. Once I had pried the first side of trim off, I could just hit it with a hammer a few times to get the rest off.

Take Saturday and Sunday off in Virginia

Chris Rock wannabe in the wings

New meaning to having a hot ass

Today is another media day, with new cat pictures, BU pictures, and a few movies from the weekend.

To game opponents -- many of whom admit they don't play video games --... 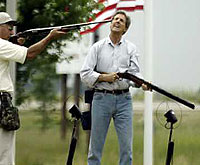 My sister's cats finally left on Friday afternoon and Booty and Kitty now have the whole place to themselves again. I think Booty misses the company.

I spent the weekend doing some more work in the basement, and then went down to Colonial Beach for the Fourth. Yesterday I came in to work for a half day and then spent the rest of the day relaxing.

"These psychological damages, which naturally flow from such a 'fecetious' mishap, are increasing 'excrementally,' " Levinson wrote in the lawsuit.

The customer is always right? Not anymore

I've got a new battle report up at www.battlereports.com

. That is my contribution to humanity for the day.

I switched over to Mozilla Thunderbird for e-mail at work, because our new mail server setup is crap. So far, Thunderbird's done a great job of catching all my spam with only a few false positives. The only reason I didn't switch sooner was because it was a little tedious transferring my old mail over from Eudora. If I end up sticking with Thunderbird for the long run, I'll have to get it installed at home where I've got almost nine years of mail to sort through.

The Loudoun Extra section of the Washington Post is pretty worthless. When I lived in Alexandria and then Fairfax County, I could at least hope to find an interesting story or two. The Loudoun version only talks about horses, farming, and how farming is diminishing in importance because of the suburbs. Damn suburbs.

"Sourcenext products are just 1980 Yen?! Oh, my Goodness....!" She faints suddenly. A guy rushs to her and says, "She is having a baby!" Everyone looks at her anxiously. The guy says, "Now, the baby was born!" And for no special reason, she had a colt. It tries to rise unsteadily to its feet. "Oh! It stands up!" Everybody is moved.

Attack of the Killer Kangaroos

Dog must learn English to allow owner into English program

www.presidentmatch.com tells you who to vote for based on your opinions of various issues.

More people should be as ingenious as this. 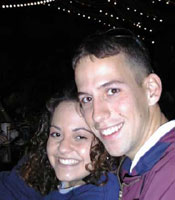 I went to Rosie & Jason's wedding in the Wren Chapel at William and Mary this Saturday. Because the wedding wasn't until 5, I left Northern Virginia at about 9:30 and didn't arrive in Williamsburg (a scant 160 miles away) until 1:30 in the afternoon. The trip back was early on Sunday morning so I made it back in only two hours after a brief stop at IKEA in Woodbridge.

If you haven't been to IKEA in awhile, it's turned into a furniture theme park of sorts, where you go on a guided tour of the store while stopping at KitchenLand and BedroomLand and so forth. If it weren't an hour away in normal weekend traffic, I'd go there for all my home furnishing needs.

Here's a song I rediscovered that we used to have on a record back in the early 80s:

'Mother of a lesbian' now an official position

The new plan calls for members of the church to throw materials into garbage cans and then light candles to symbolically "burn" the material.

Sorry for the recent lack of updates. I've been in the process of doing an annual backup of all my junk, including this website, at home. Because I update both from work and home now, I had to make sure that all my local copies were synched up to the beautiful site you see before you.

Anyone seen the show, Crossballs, on Comedy Central? It's on Tuesday through Thursday at 7:30 and pairs up supposedly real experts and comedians pretending to be experts in debates on hot topics. Last night there was a debate on obscenity in the media between a conservative and a hip hop artist who was avoiding controversy by encoding all his swear words in telephone keys, like 3285. Good stuff. Comedy Central can be hit or miss -- Reno 911 is occasionally funny and their new talk show with the guy who exudes annoyance from his pores and the scariest looking women actress in modern times looks unwatchable.

Airport police said a security screener was waving a metal-detecting wand over Miller's pants area on Friday when Miller pulled his shorts down to his ankles. He wasn't wearing any underwear. Miller then said, "There, how do you like your job," thus ending the screening, according to the police report.

As is tradition, Alias has been nominated for a bunch of Emmy's

, and it will end up winning none of them.

It's the doldrums of the summer months now, so there's not much going on. Instead of something insightful, here are three examples of the worthless tenacity of the U.S. government:

But the U.S. government accused him of violating U.N. sanctions against Yugoslavia by playing the match there.

The US has stressed it will seek the extradition of an alleged army deserter when he travels to Japan for health care.

However, a few days later, he was shipped back to the United States to face the cowardice charge, the first such case since the Vietnam War. Conviction on the charge can result in the death penalty.

Incidentally, I think that the death penalty is a wonderful positive influence on fighting troops. "Go out there and get killed or we'll kill you back home!"

Another weekend of home improvements down and many more to come. I also picked up three career-related books this weekend, Code Complete, The Pragmatic Programmer, and Rapid Development. I'm reading the middle one right now, since it's the smallest of the tomes. It's got some good info in it, but I'll post a better review once I'm all done and have digested the content.

I just did the wiring for the light fixtures on my eventual bar. Here's the progression of progress since I first moved in. It's very much a "whenever-I'm-bored" project, but I should be finished pretty soon. All I have left is to cover the ugliness with paneling and paint everything, then add the trim and molding along the edges. It should be a pleasant addition to the pool table room once it's complete.

There's another incredibly stupid, overdramatic reality show on Fox, Trading Spouses, featuring a white-trash bigot living with a black family. It follows the Fox formula of replaying every clip at least twice and dragging things out far beyond their useful lives. I had to turn it off after only fifteen minutes.

On another note, I watched Dodgeball last week. It was funny if you like Stiller movies, but not as funny as it could have been.

Jay Walkers will be shot

Inmates on a beer run

She wanted to be sure that her missing Monday paper had nothing to do with the fact that her Sunday Tribune had been labeled "Final" edition.

The Pants on Fire Tour rolled into Spokane on Tuesday.

We watched Starsky and Hutch last night -- a pretty funny movie. It was well-made and not over the top.

Bite-sized snacks are never as good as they should be. They have so much wasted potential -- you expect something that tastes better than normal size, because the area of good taste is greatly reduced while the flavorful materials are kept constant. In practice, the snacks are more shoddily constructed, have more crumbs, and skimp on the parts that taste good.

There's nothing to say today. Have a good weekend and I'll post some new pictures next week.

The weekend was a pretty productive one. On Friday night we went out an watched The Bourne Supremacy, which was about as good as the original. The theatre was sold out and we ended up in the front, and the hyperkinetic handheld camera filming effect, which is very in these days, did not make for very intelligible car chases, but it was fine as long as no one was prone to motion sickness. Afterwards, we came back and shot some pool until late.

On Saturday and Sunday, I spent some time working in the basement and also got through some more reading of my new books. I also went grocery shopping at the nearest Shoppers Food Warehouse, where they've recently installed a security camera over every cashier line. Strangely, the cameras are all pointed at the cashiers and not the customers...

I had another work-related barbeque on Monday night. The weather held up just long enough to cook a bunch of hamburgers, and it's been gloomy and rainy ever since.

Most room service personnel work alone. It can be very unpleasant to get called to a room to be met by a naked man.

You may not know it, but chances are you, too, are a programmer. If you've created a spreadsheet, made macros in Excel or Word or used a Web application to fetch news about your hobby or favorite celebrity, you've programmed.

I'm pretty booked at work this week, so apologies if I end up skipping an update towards the end of the week.

Why there are so many Republicans

Bushy bandits having a ball

When not to be a whistleblower