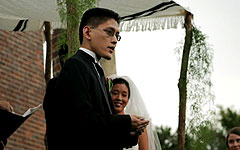 I'm still pretty tied up at work so the latest new pictures will have to wait. However, you can see pictures from my sister's wedding here:

How not to advertise your escort service

He received $30,000 to settle a 1999 case in which he suffered facial cuts after he fell through a broken school fence.

My pool table lamp arrived, and I'll be setting it up with my dad this weekend. I also made the guest room livable for the endless flow of homeless tourists that I may someday face.

Work continues at its inexorable pace. I should have more time next week to start writing really updates again.

Doom 3 came out today. Mine's in the mail.

My excuse if I ever go to war

I got spam today with the subject "Olsen Twins use online Pharmacy".

Poll of the day:
The latest Code Orange alert: terrorist warning or campaign ad? Discuss in the comments section.

How not to learn English

People believe in to God if you give them enough cash

While going through some ancient Java code from before my time at work, I found the following gems:

and later on in the same class:

Every person who opens the door - as long as they're white - I'll say, 'I'm James Hart. I'm running for Congress.'

When to Rob Banks

There's a very good chance that whichever room I'm in always has some kind of music playing. In my car, I can't stand listening to the radio because of the incessant and annoying commercials, so I'm constantly making mix CDs. After growing tired of hearing the same old songs over and over, I decided to give XM Radio a try.

I picked up the Delphi Roady2 at Best Buy for $130 on Wednesday night. Installation is pretty straightforward, and the tuner gets XM signals from its mini antenna, patching it to a cassette adapter or wirelessly to a designated FM station. Since I don't have a cassette deck in my car, I went the wireless route which doesn't give as good sound quality as the wired way, but which is still better than the radio.

Activation was easy -- I signed up online and left the tuner on until my account was magically beamed down from outer space by XM aliens. Ten bucks a month gives you access to a hundred commercial-free music stations of all genres

. You can also get a free accessory that allows you to bring it inside and hook it up to your home stereo system. I figure I'll try it out for a month or two and see what I think. So far it's been pretty impressive.

Anyone else out there tried XM Radio or its going-broke competitor, Sirius?

This President speaks with clarity and conviction

The only loser is Mr. Wexler, who looks dumb bringing an irrelevant lawsuit and then losing it.

Using 'lez' in Scrabble was forbidden

I've kept pretty busy at work this past week which hasn't left me much time or impetus to get an update written. I took Friday off to take advantage of some of my surplus hours and got all the things done I should have been doing throughout the week. Today I finished off installing the pool table light, after popping the breaker several times (caused by a faulty lightbulb).

I also did some site cleanup, posted some new BU/Home/Cat pictures, and posted the latest battle report from last month on the Words page.

I saw a few movies last week, including The Butterfly Effect which was much better than reviewed, and The Whole Ten Yards which was pretty stupid. The former should be watched with the director's cut ending for full effect, because it makes more sense and isn't a big copout like the theatrical version. I didn't think Ashton Kutcher could play a meaty role but he didn't do a half bad job.

Turkmen leader mistakenly believes his country is a level in Zelda

New ways to harm our country 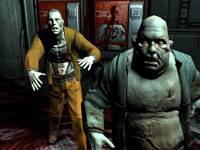 Doom 3 is quite the suspenseful game. You'd think that it would be impossible for a game to make you jump, but Doom succeeds multiple times over. My machine isn't fast enough to play with all the settings cranked up, but even at low resolutions the graphics are excellent. Give it a try, if you can stomach paying $54 for a game.

At one point, he told police, his testicles had been stapled to his stomach. 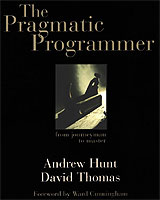 One of the books I finished long ago but never got around to reviewing was The Pragmatic Programmer by Andrew Hunt and Dave Thomas (presumably not of Wendy's fame). The book is a language-agnostic best practices book that's written in just the right tone to get its points across (not too jokey and not too dry). It's pretty short, but does a great job at distilling information to the essentials. This, along with Effective Java by Josh Bloch and Refactoring by Martin Fowler, would be a book I'd recommend keeping around to flip through sporadically.

Buy your casket at Costco

Lawyers retain right to have sex with clients

I'm really enjoying XM radio, and haven't had any reception problems yet. There's a station for every occasion and you don't hear many repeats unless you're on a hits / top 20 station. I've found myself flipping through the decades stations (hits of each decade since the 40s), the rock stations, the global pop station, the classic jazz station, and a little soul/disco on the way home.

Today will be my last day at work for awhile. Tomorrow I plan on backing up and reinstalling my home computer. Saturday I have a wedding in Schley, Virginia, and then I'm going straight from there to the Outer Banks for a week. This is probably the first time that I've used more than 8 hours of leave time for a vacation. The gist of this ramble is that there will be no updates until September. You're probably used to it by now anyhow.

American Idol is in DC today. I could be the next Reuben Stoddard. I look and sing just like him.

Of all the phone books I've torn, I've found that the Portland ones tear better

Welcome back to the URI! Channel. I've posted a bunch of pictures from my travels in North Carolina on the Photos page and had intended to start a daily travelogue today, but right now Hurricane Gaston is giving me a migraine so it will have to wait until tomorrow.

I spent most of Thursday and Friday packing and shopping and stocking up on Costco goods for the trip. On Friday night, I drove the cats to my parents' house after turning off the water and lights and random house appliances. Kitty replied by dropping a big wet turd in her carrying case, ruining a cute fuzzy red and yellow (and now brown) toy. Booty peed in her case, leaving a piquant odour in my back seat which won't go away until I've cleaned it for a few more months.

After they had settled into the new house, they were fine, and even did a little playing. I slept in my old bed that night, which triggered a round of dreams featuring people and events from high school and before.

For Sale: Picture of a TV

Dave Matthews identified as culprit who pooped on a passing boat