What with the pool table, home theatre, and private champagne room, my house has always been a prime location for playing the part of the host. However, this "I'd rather stay home and invite everyone else over" behaviour isn't new -- I was hosting extravagant parties as far back as junior high school. 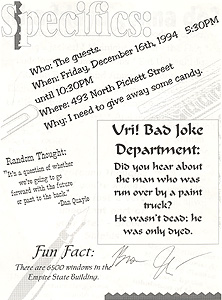 It started simple, with the obligatory birthday party, but soon expanded into a June "End of the Year Party!", a December "Other End of the Year Party!", and a random holiday-themed party thrown in for good measure. By the time I left for college, there had been at least twenty-five parties hosted in the home of my worn parents (my dad would occasionally retaliate with tricks like taking everyone's shoes, tying them up in a garbage bag, and throwing it on the roof).

True to BU-form (characterized by an obsession for planning, and too much free time), every party was tightly orchestrated down to the tiniest detail, so it would appear flawlessly facile when it came time to execute. The guests were first informed a few weeks in advance with a multipage invitation typeset with only the highest of Print Shop Pro skills on the dot matrix printer (invitations to friends in Arlington and Fake Alexandria had theirs mailed a day early so everyone would get it on the same day!) 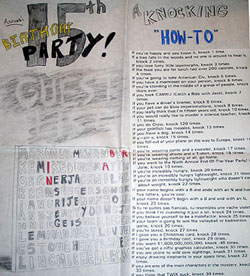 Each party had its own impossibly long acronym, like the FAEOTYP (Fifteenth Annual End of the Year Party!), and of course the word Party! always had an exclamation point on it. The invitations were chock full of inside jokes and fun facts stolen directly from Uncle John's Bathroom Reader, and the first invite would always have a choice of three different dates (so I could pick the one the most people were available for). After a round of phone call surveys to select a date (generally just a lame excuse to call the High School Crush of the Moment), a second lavish invitation would go out a week before the big day. 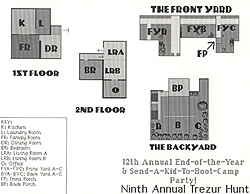 The first thing guests would encounter at the front door was a complex set of knocking instructions, filled with silly jokes and topical gossip from the schoolyard (a surprisingly large number of guests would actually read the entire thing). Neophyte guests who didn't understand the system sometimes went to the side door, where my dad would tell them "The party's next week!" and slam the door.

Once everyone had arrived, it was tradition to kick things off with a Trezur Hunt. Guests were divided into teams, given a map made with DeluxePaint, and a first clue which (when decoded) would lead them to the next location in the house (below is an actual clue from a 1996 Trezur Hunt). The first team to get through all ten clues got the prize, which was usually a giant box of Twix bars or something equally as fun. The Trezur Hunt was always a great success, except for the year where I had one team end up with a padlocked duffle bag while the other team had the key (a sociological experiment as it were). It turns out that a padlock is no barrier, because you can still open the zipper by pulling width-wise on the loose fabric, and I had to quell a mini-riot from the team with the key.

After the Trezur Hunt, we'd play badminton, volleyball, or have a water balloon fight while waiting for the Pizza Hut Pan Pizzas to arrive (This was a carefree age when no one cared that they were consuming five pounds of grease for every one pound of pizza). From here, all the girls would end up watching a movie and all the guys would end up in front of the computer to see whatever latest and greatest new game I had.

Once it was sufficiently dark out, the party would move outside -- the perfect excuse to terrorize the neighbourhood playing Bloody Murder, or to trespass on the last remaining Castle Playground in the city (located conveniently up the block at the elementary school). Despite the hoodlumry, all of my parties were entirely PG -- not because of the strict eye of the party chaperones (they were the least meddlesome party parents ever), but simply because it was a more innocent time when people weren't as concerned with smoking, drinking, and sexing up wenches, as long as they were all having a good time doing something.

In fact, the only party we ever played Spin the Bottle at was in the basement of the strictest parents in town, where we had to keep the door cracked at all times, and one or the other would come downstairs every five minutes looking for the pot. We used a mirror and a lookout system expertly devised by yours truly, but that is a story for another day.

A dating site for the hot

Love in the air for one lucky couple