As anniversaries pass, and senility robs us of our wedding memories, we'll always have the photographic evidence to fall back on. 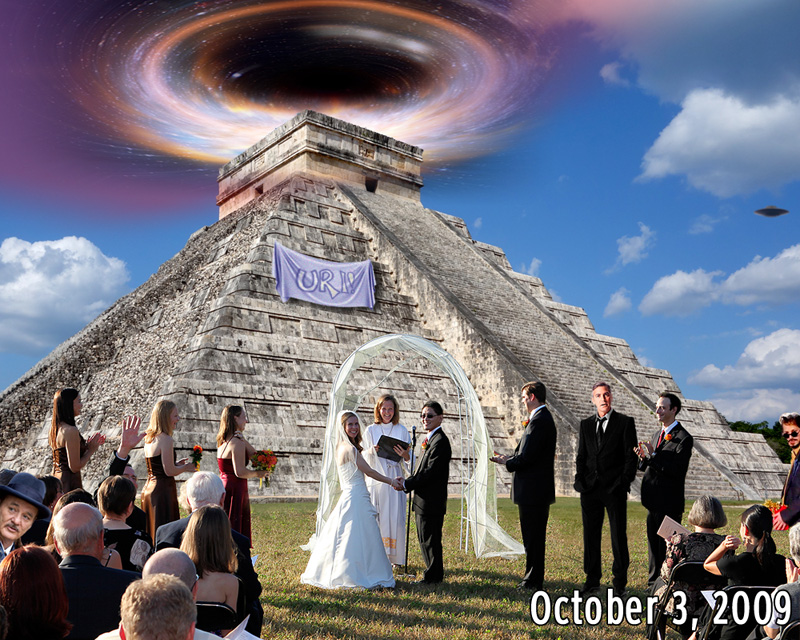 Ian is now 17 pounds and 23 weeks old. He sleeps through the night most nights and is slowly learning to take a formal afternoon nap after about 30 minutes of absolute outrage. 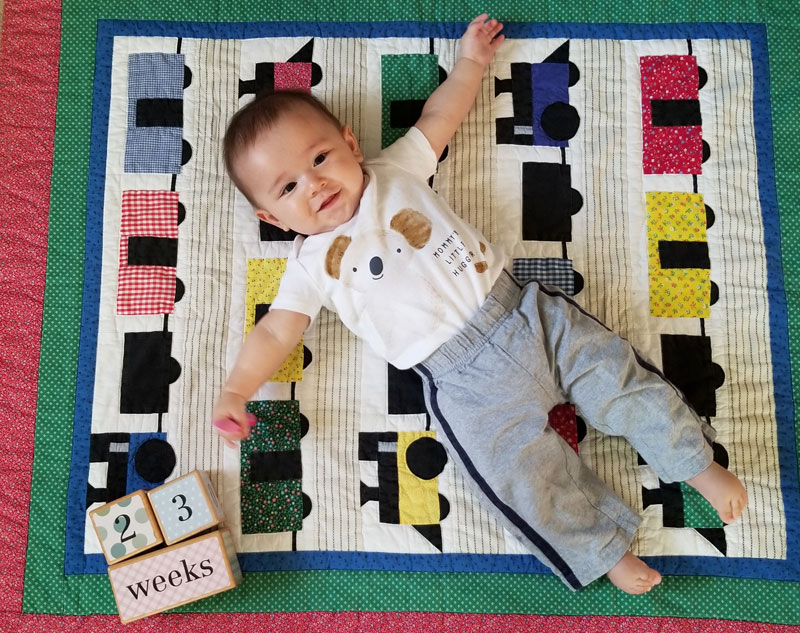 He loves to eat solids, and is equally pleased with being at eye level with the rest of us while eating. He can down three ice-cube-sized blobs of purees without batting an eye, and may soon be participating in competitive eating contests. 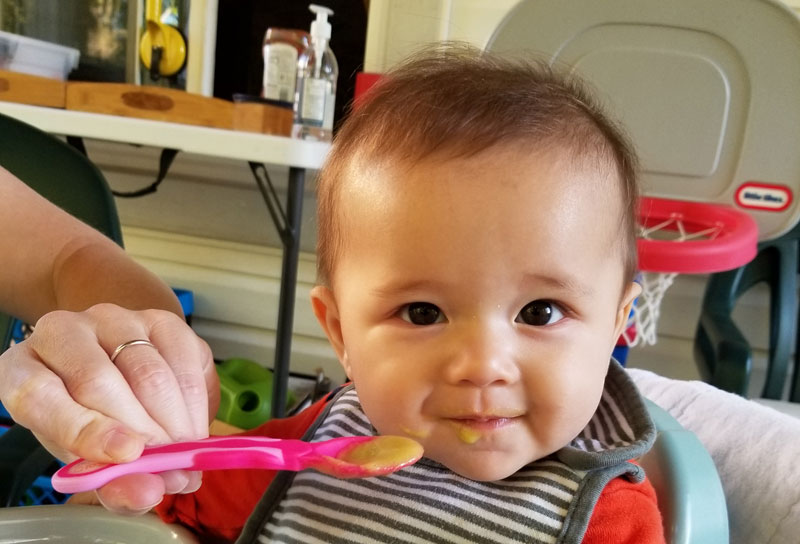 He is not quite rolling over yet, but can roll out of different positions. He can also tilt his head all the way back while on the floor to see what's above his head -- he looks kind of like a whale that's about to open his mouth wide and aerodynamically swim through a swarm of chum for his next meal.

Ian has calmed down a lot and is more able to spend longer periods of time just lying around us exploring his environment instead of demanding constant attention. He goes with Rebecca to an outdoor exercise class four times a week but does not do squats.

I got Rebecca a wildlife camera for her birthday this year and we've been having fun placing it in different areas of the backyard.

Here are some other notable stills from the past few weeks. 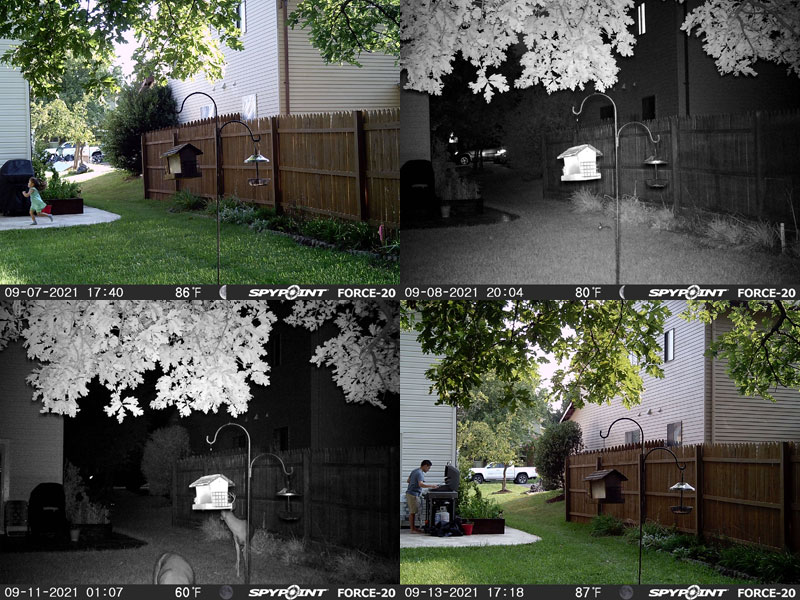 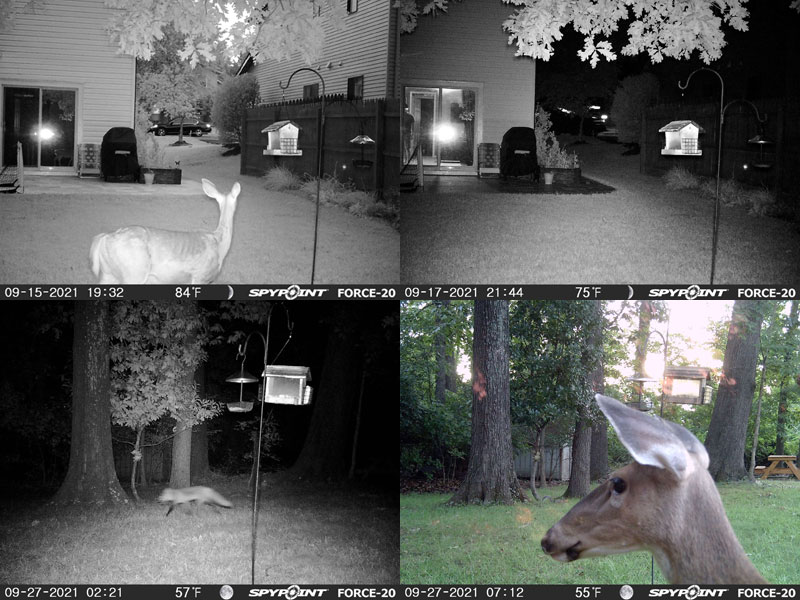 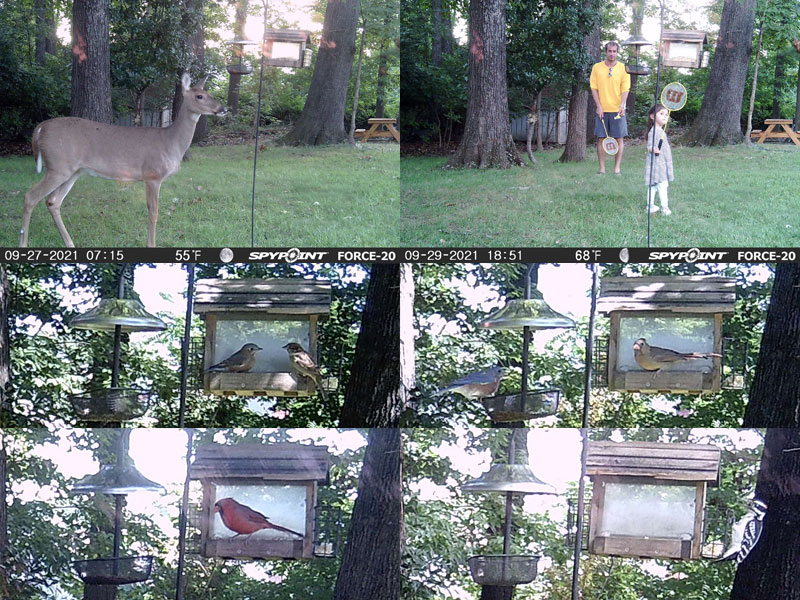 Spypoint Force-20 Trail Camera:
This is a great outdoor camera in the under $100 range. It's easy to set up, runs on 8 AA batteries, and records to a standard SD disk. The night vision works well and the motion sensor does a reasonable job of ignoring false positives.

Bosch, Season Seven:
I was really frustrated by the "slice of life" style of the early seasons of Bosch, full of long, lingering reaction shots and scenes that didn't do much to propel the plot. It took four seasons before I really appreciated it. The seventh and final season wraps everything up nicely although the series is less about a huge culmination and more about hanging out with the characters for a little bit longer. Not the best season, but definitely not the worst (which was probably the one where Bosch tried to be Jack Bauer by infiltrating a pill mill by himself). Free on Amazon Prime.

Money Heist, Season Five, Part One:
The next drop of episodes in the second heist (Season 3 - 5) keeps you guessing and has some strong character moments and resolutions. However, it's held back by some overused flashbacks of characters I cared less about and way too many guns. It reminded me of the difference in tone of LOST when there was just 1 gun on the whole island and LOST when everyone had a semi-automatic rifle. Free on Netflix.

Off to the Races by Jukebox the Ghost:
An album of pleasant pop songs that starts strong and becomes more forgettable as it goes on. They share the same sound as several other groups in this area of music, but have some nice hooks. Just over 30 minutes long, which is a negative for me.

The neverending torrent of arts and crafts from preschool included these two insightful works. 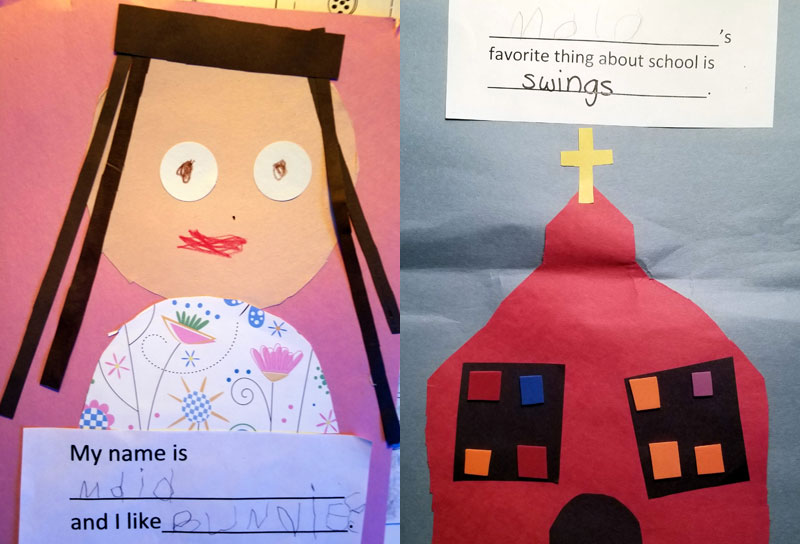 Maia had to draw a bunny on her own to get credit for a Farmer's Market activity. She often runs out of room while writing her name and puts the last A on another line. (On the back is a farm with some farm animals which I helped with). 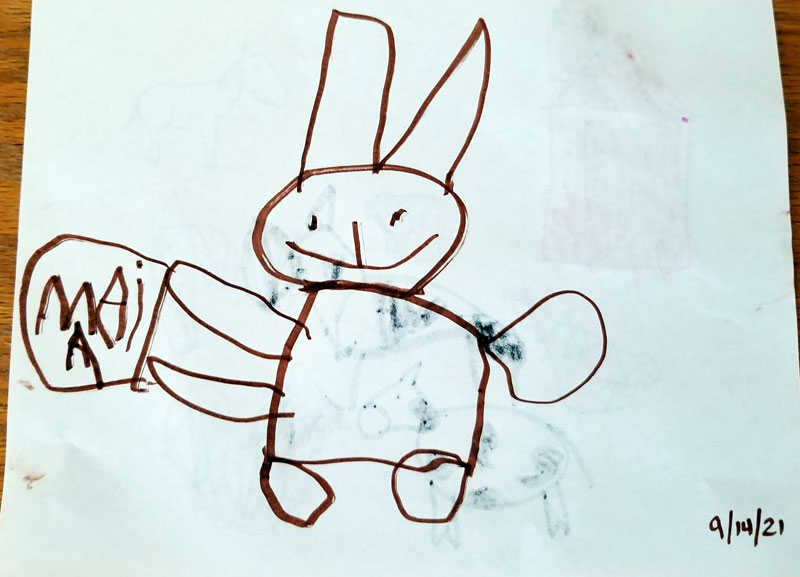 Bunny lives on our court. Bunny has a striped car and his house has two chimneys shaped like bunny ears. This is a highly accurate rendition of the surrounding streets. 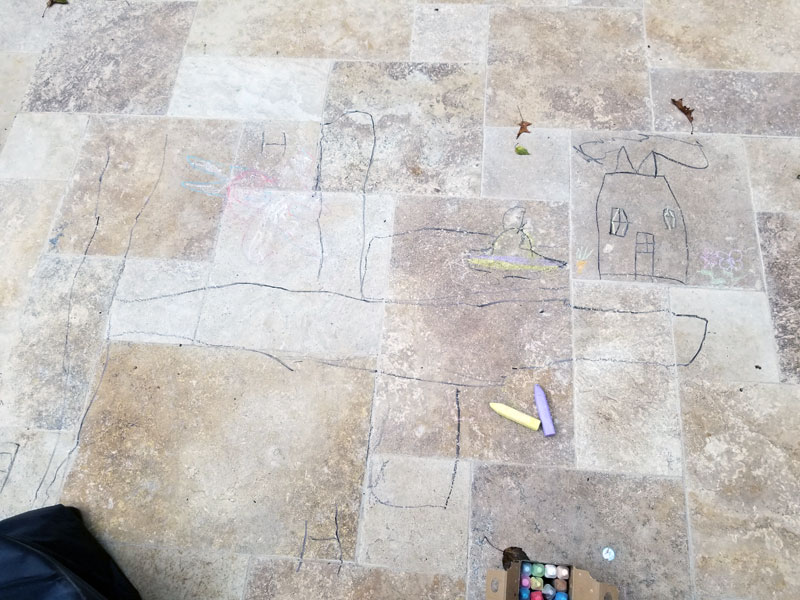 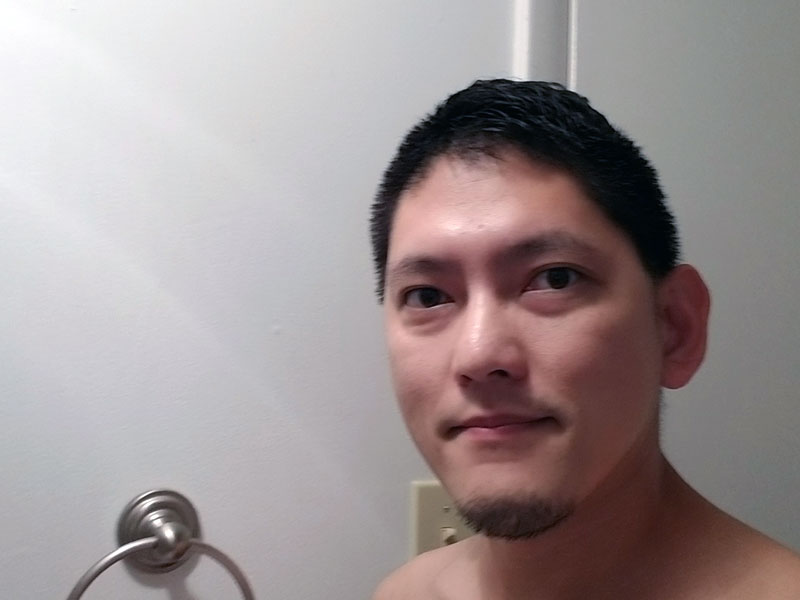 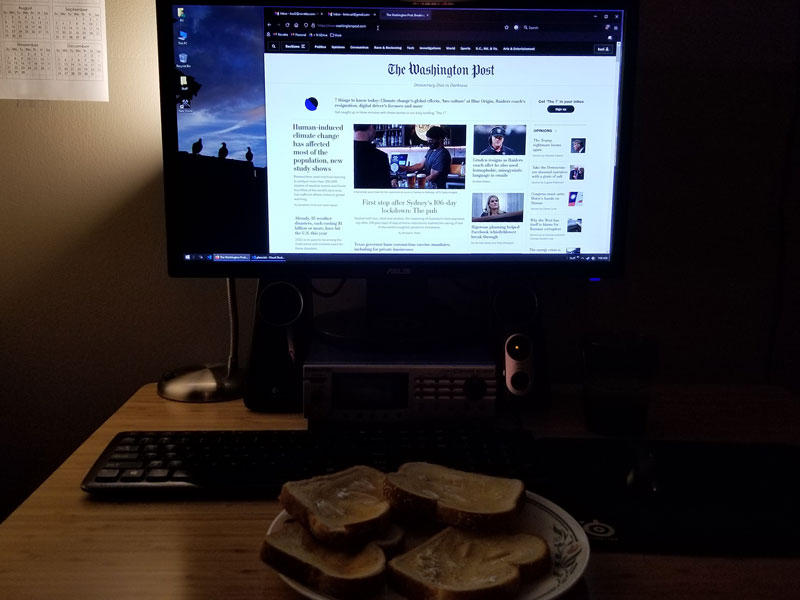 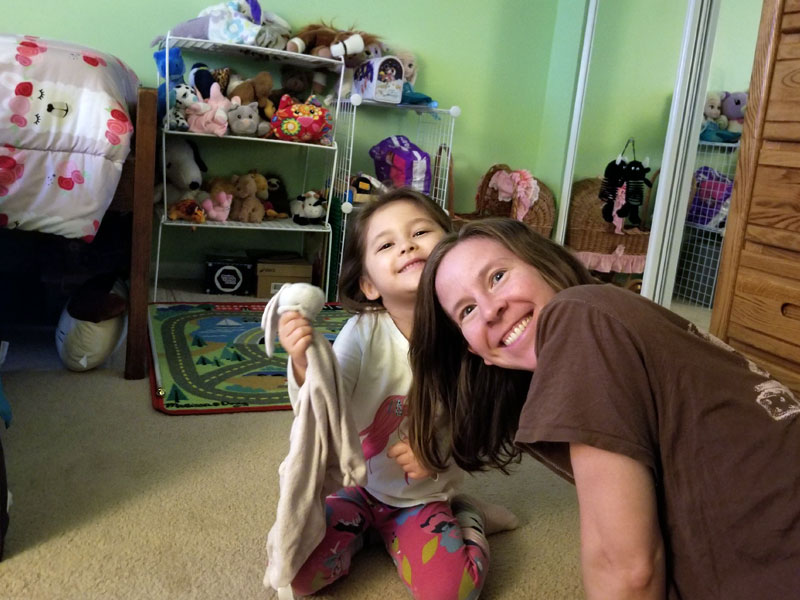 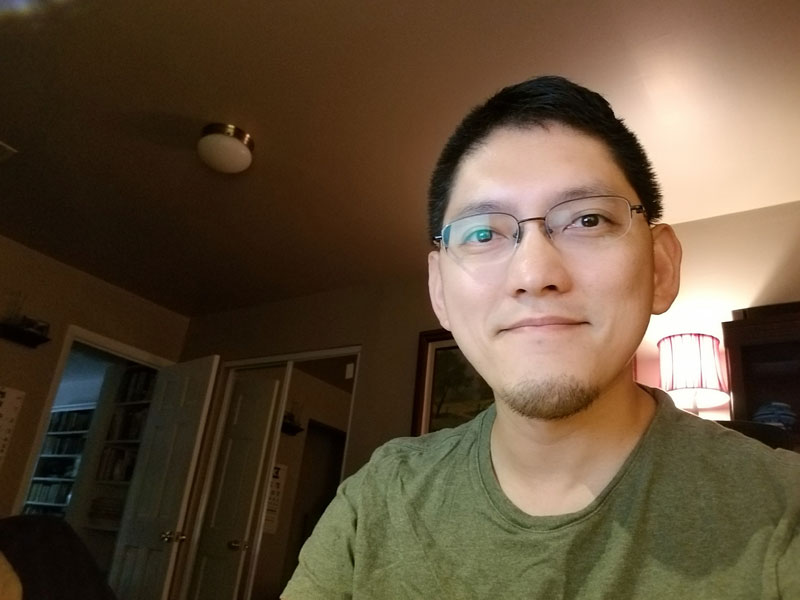 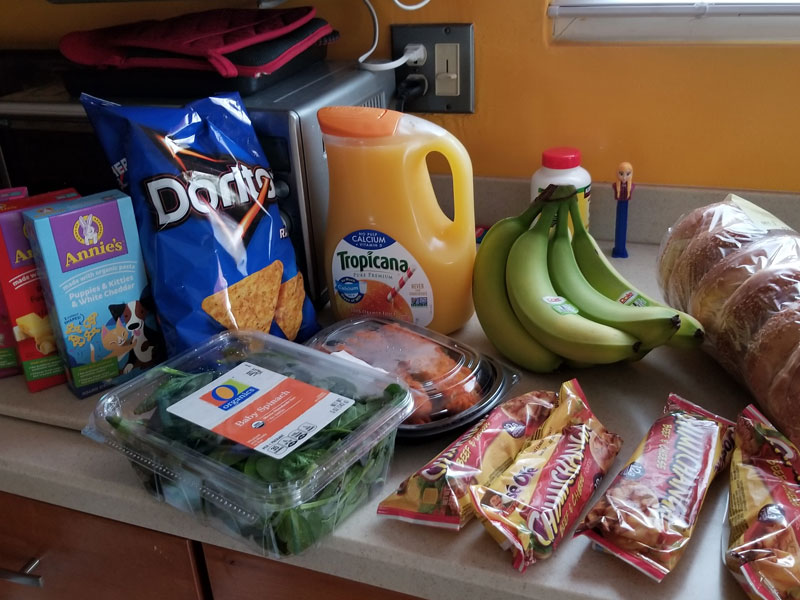 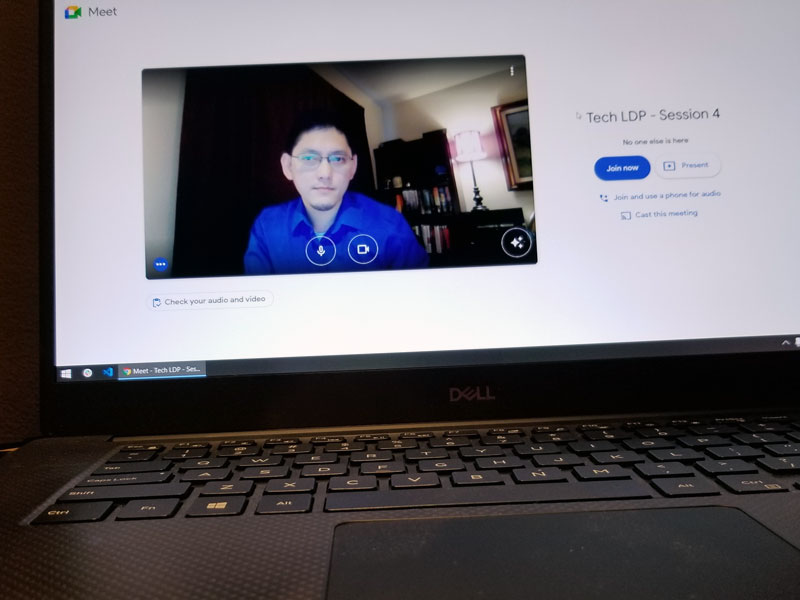 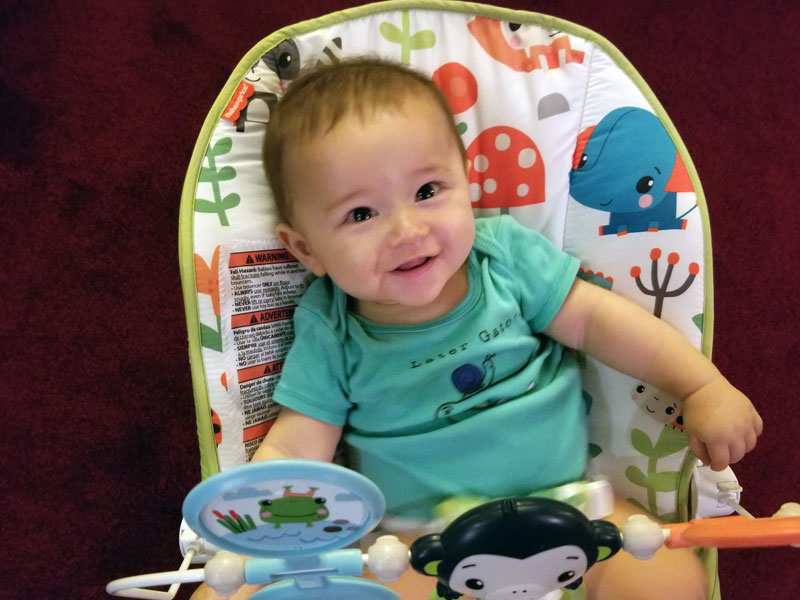 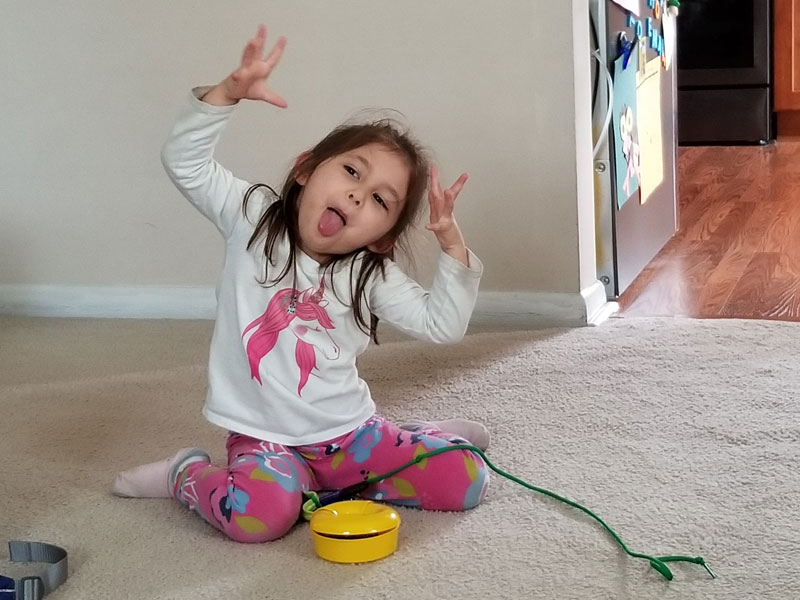 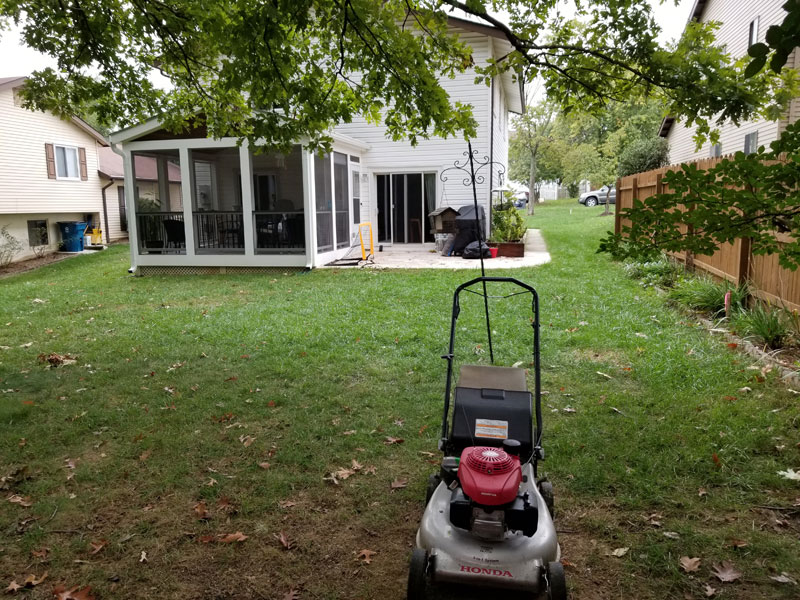 2:15 PM: Hopefully the second-to-last mow of the season. 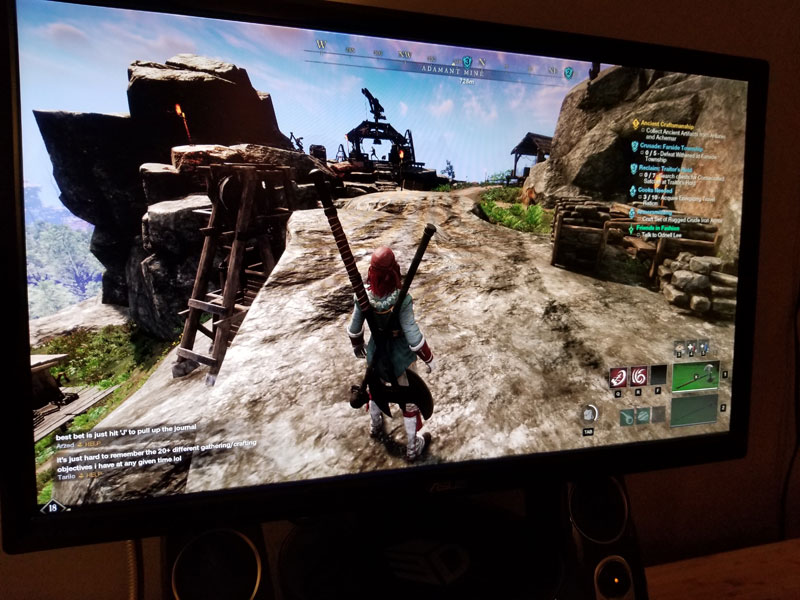 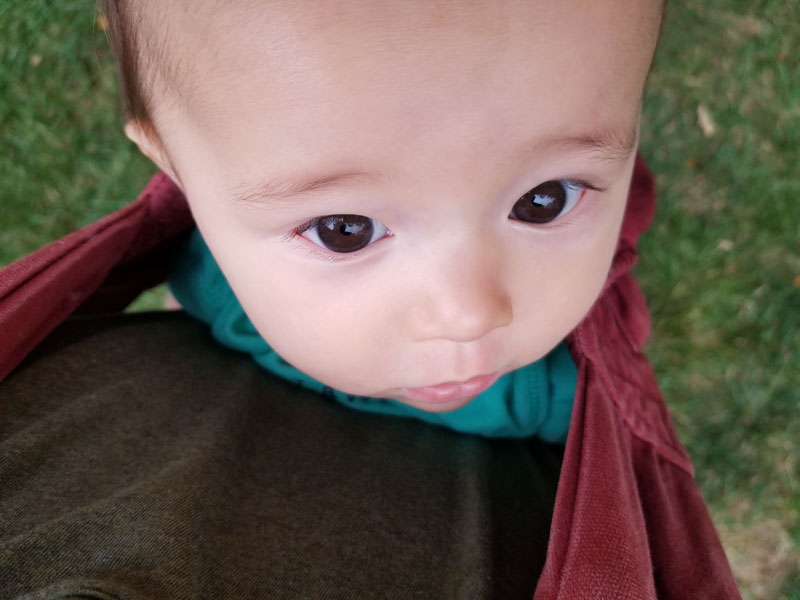 5:14 PM: Ian is strapped in for a teeball game with Maia. 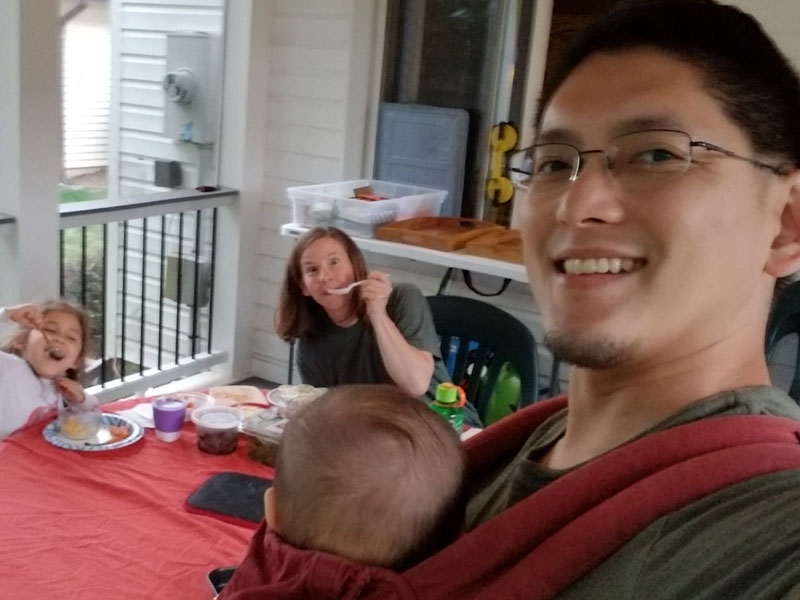 Profile (R):
This movie tells the story of a journalist who tries to gain the trust of an ISIS recruiter but ends up sympathizing with him. The whole movie is told through a view of the journalist's laptop screen with video chats and instant messages. It's a unique, tense watch, although the final motivations of the main character fall apart a little in the climactic moments.

The Lion's Roar by First Aid Kit:
The vocalists on this album sound like Christina Perri if she wrote hippie music. This is a nice sound for a single (which is why I bought the album), but wears thin quickly when every song on the album has the same timbre.

Lupin, Season Two:
The first part of this French heist show was a sleeper hit that both Rebecca and I enjoyed. The second half maintains the momentum and surprises. I kind of hoped that this would be the wrap-up, as the penultimate episode felt very complete, but there is a third season brewing. Free on Netflix.

Mario Kart 8 Deluxe (Switch):
This is the game that Maia and I play now that Ori and Breath of the Wild are done. Maia enjoys it because she can finally play on her own instead of just telling me what to do. From my perspective, it's fine as a Mario Kart game but feels full of recycled content without much innovation -- I felt the same about many other games that were ported over from the failed WiiU to the Switch. The racetracks are well-done and full of little details. The item game is still awful, with emphasis on unavoidable items that make the game more about luck than skill (see also, later editions of Mario Party). It's no fun being in first place, where you get the worst items and are targeted by the best items. One annoyance is that the unskippable credits scene plays after every Grand Prix once you start the 100cc circuit, forcing a close-and-reload of the software.

On Saturday, we took part in the Loudoun Farm Tour by visiting three different farms: Donkey Meadows, Butterfly Hill Farm Store, and Kathy Ann's Farm. Maia got to ride a donkey, which was fun but $10 for a 1 minute ride seemed a little excessive. She also got her face painted like a bunny. 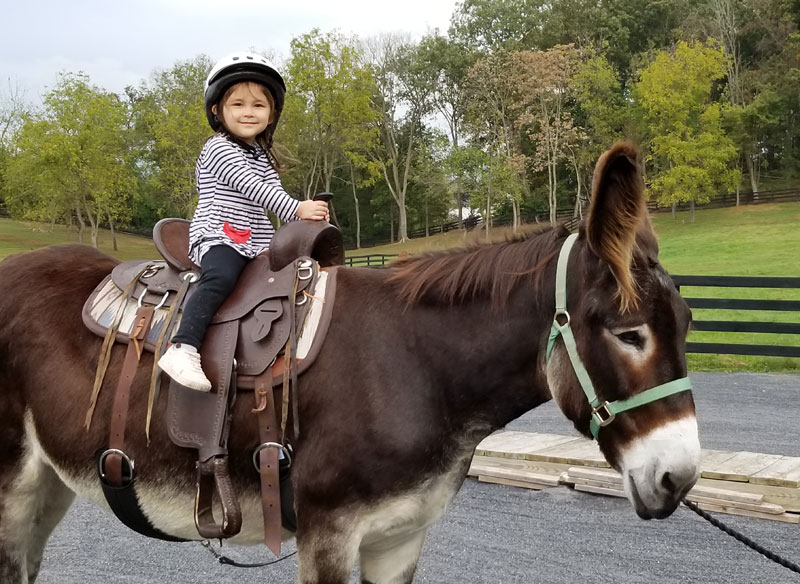 From there, we went to Butterfly Hill to see the alpacas, and then Kathy Ann's to see various cows, sheep, alpacas, and fowl. The owner shows Maia how to weave at the loom. 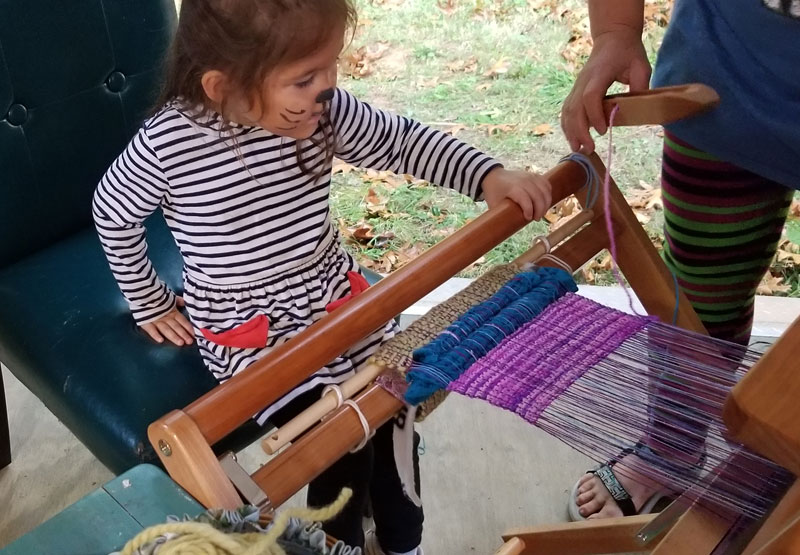 The sky opened up and it poured for the rest of the day, so we came home from here. In the evening, we had half of the Smith family over for Blackfinn Ameripub food and board games.

We did our usual Sunday routine, with Rebecca and Maia off to the Farmer's Market while I stayed home with Ian. We spent the afternoon outside, playing badminton, letting Maia bike around the court, and repairing the bird feeder post that a squirrel knocked over.

Songs of the Enrichment Jungle: Amanda the Panda 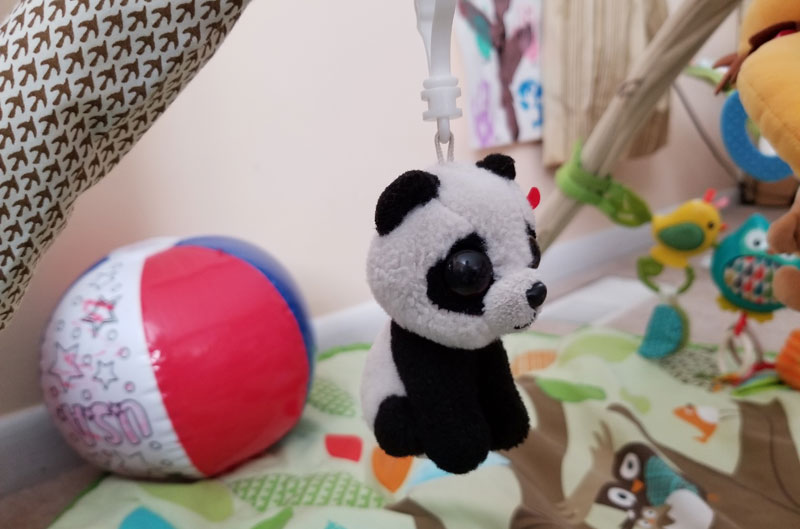 The eighth notes are swung, obviously.

The latest iteration of VR headsets, the Oculus Quest 2, is a muddle of compromises that is nevertheless worth it, due solely to its completely wireless gameplay.

Last year at this time, I was on the fence about VR -- my first generation Rift had developed a sound issue from a very common manufacturing problem and Facebook was charging 40% of the original price to get it fixed. They were also pairing headsets with Facebook accounts, which I still think is an awful idea. I finally decided to get the Quest 2 for my 42nd birthday because I wanted something new to do in the 15 minute gaps between childcare and I was sitting on too many bonuses from work.

The biggest improvement from the Rift to the Quest is that there are NO MORE WIRES (besides one for charging the unit when it's not in use). All of the wires and cameras you used to have to set up around your room to play are gone. Everything you need to do VR is shown in the picture below.

This is huge from a setup and comfort perspective -- you can now do VR wherever you'd like and are no longer tethered to a high-powered PC. The headset downloads games over Wi-Fi, which can also be used to cast to a TV for an audience with a $30 Chromecast. Once of the biggest problems I had with the Rift was getting the motivation to move my gaming PC to the bigger room each time and having to be careful of the cables so I didn't accidentally pull the PC off a table while playing. Now, I do a daily morning workout with Beat Saber before getting started with my day.

The limitations of wireless play are few -- graphics aren't quite as good because all processing is done in the headset, and there are weird delays in the TV casting that make showing off a rhythm game more challenging. You can purchase an $80 cable to continue playing your high-end VR games on your PC with this headset, but I haven't bothered -- the native games are good enough and not glaringly worse looking than before.

The headset is easier to put on and take off, or quickly adjust for other players. It's definitely more front-heavy, which affects games like Walkabout Minigolf where your head is looking down then to the side a lot. "VR Hair" still happens as well. Once new limitation is the adjustment of the lenses for your interpupillary distance (IPD). The Rift had a smooth slider with lots of available settings. The Quest only has 3, right around the bell curve of the average person's IPD. What this means for a person like me with an IPD just outside the fixed range is that the image can be sometimes feel out of focus. This is really only a problem when there's text to read on the screen though.

The controllers are a little bigger, which is better for tall people. For me, though, this is just more area to get slippery and sweaty. The controller has slid out of my hand during Beat Saber enough that I try to clutch them in a "claw" grip now. Tracking with the built-in cameras is definitely not as good as on the Rift. My Beat Saber precision has gone down and sometimes I'll miss blocks on the sides of my head that should have clearly been hit. And lastly, you will need a Facebook account to use the Quest. I don't like the idea in general, especially since an account suspension / ban on Facebook apparently prevents you from using the hardware. 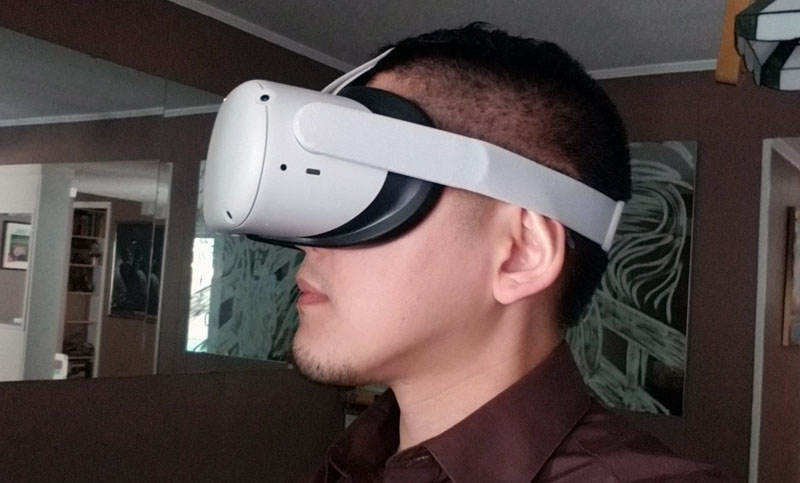 The bottom line is that this is VR at a reasonable consumer price ($400, vs $800 for the Rift) and the absence of wires makes it really easy to just enjoy the experience without lots of setup. I would recommend the Quest 2 to anyone with a VR curiosity and money to burn. Game reviews to follow next week! 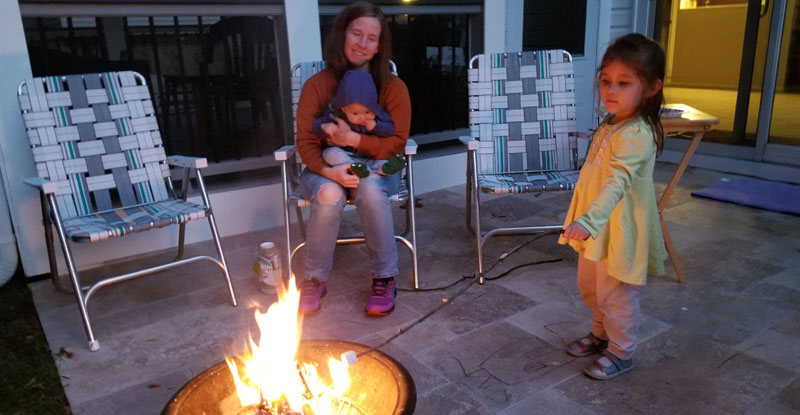 First fire pit of the fall, with s'mores! 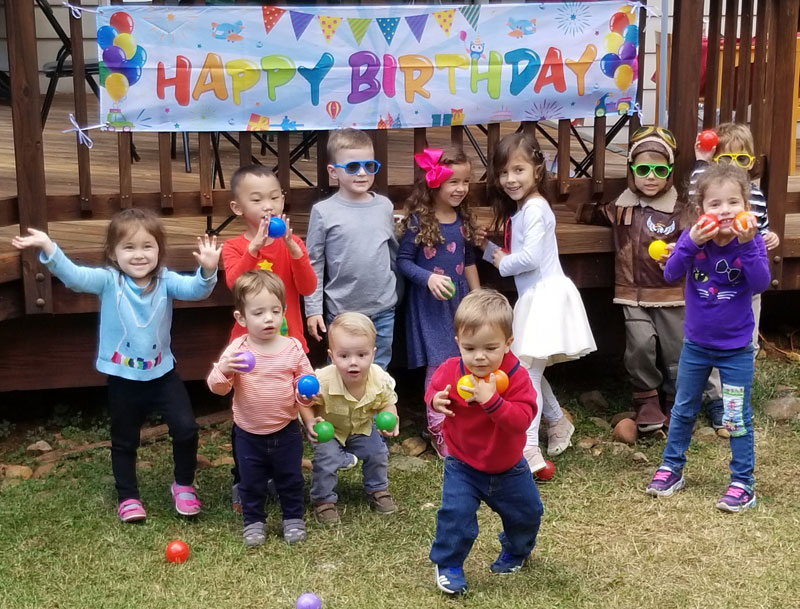 We go to an airplane-themed 4th birthday party on Saturday. 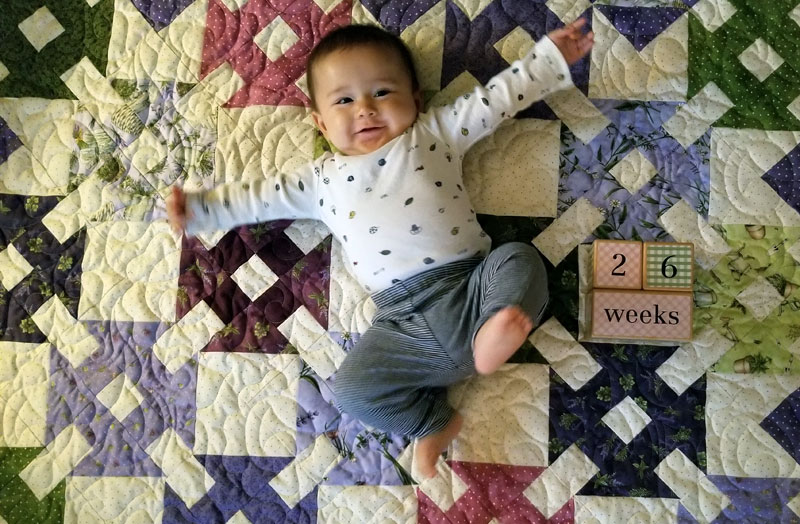 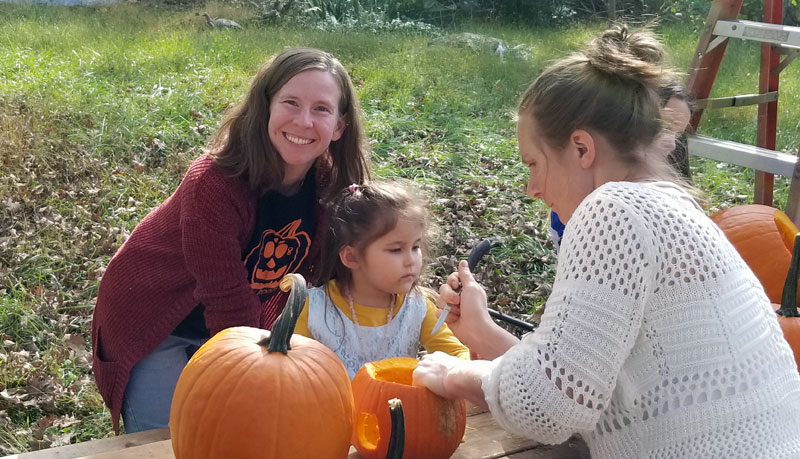 We head out to Taylorstown for some family time on Sunday.