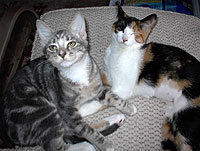 Anna and I put a deposit down on a pair of 4-month-old kittens yesterday, and we're going back tonight to pick them up. They're sisters, though they might not look it in the picture. We drove out last night in the snow to see them, and in the few minutes we played with them, we noticed that their personalities are very similar to Booty and Kitty.

Now there will be enough cats for Doubles and/or Four-Square.

None of the winners - Bush, Rumsfeld, Spears or the goat - were on hand to accept their awards.

Those crazy but lovable monks

Bono up for Nobel Peace Prize

Here are pictures of the new kittens in the manor. Kitty and Booty are disgruntled at the new arrivals, but more snooty than aggressive. I'm a little behind on pictures, but I hope to rectify that next week when I do tons of updates to the site. In the meantime, I've uploaded a couple movies of the new kittens:

I'm taking a week off from work next week to take care of a lot of outstanding errands and projects. One of them will be a moderate update to this site. Do you have any suggestions for the modifications? Sections you visit that you'd like to see improved? Topics that aren't covered enough or are covered too much in news updates? Let me know!

My Dinner at Applebee's With White Supremacists!

City should be at fault for the actions of retarded teenagers 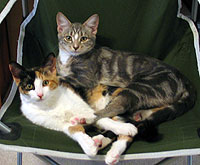 Greetings from "I took a week off and you didn't"-ville. Life and cats are good. We're considering the names Sydney and Amber for the kittens, though April might be in the mix too. I'll talk more about them in another update, since this one is reserved for the new look of the URI! Zone.

After experimenting with several dramatic layout redesigns, I finally decided on a moderate graphic revision while maintaining most of what worked from the old site. The URI! Zone has been around for nine years now, which makes it younger than the shirts I bought in high school and still wear regularly, but older than most cats or dogs you currently own (Chompy included). I think I finally did the navigation well around Year Eight, so I'm sticking to my guns in that regard. The Links page has been trimmed down and the posting bug on the Forum has been fixed, but you won't find much new functionality at this point.

Here are the short-term upgrades that I have planned:

Here are the long-term upgrades that I have planned:

I have no grandiose plans for the site, other than to keep it regularly updated and interesting. I'd like to see the Forum get a little more use, though it's generally hard for the various visitors from school, work, games, and links to find things worth talking about. In general, I've stayed away from the deep and the somber in news updates, and I'll continue this for now. There are plenty of more interesting blogs discussing the meaning of life, angstful teenage poetry, or right-wing conspiracies, so the URI! Zone will continue to be a light site about weird news, stupid people, my personal life, and the occasional critique of a passing fad when my feelings on the subject exceed the Too-Apathetic-To-Write meter.

One of the things I always wanted to do is to create a comprehensive resource about something, be it Alias episodes, a band's music, or gaming tips. I've avoided this for two reasons:

If you can convince me otherwise, or have a topic I could write about, feel free to let me know. What do you think about the new look? Fire away!

In advance of major holidays, sports events and parades, Luzhkov forks out tens of thousands of dollars for planes to seed clouds with dry ice and liquid nitrogen.

Inmate given laxatives as prank

Teachers refuse to give homework

"I'd like to buy an owl." - Contestant on Wheel of Fortune

The new cats have very distinct personalities. Sydney is the psychotic grey one who likes to make feeding time hard by diving into the food tin while we're trying to scoop. She'll load up her cheeks with food, chipmunk-style, and then jump out and spray pellets all over the floor so she can eat them at her leisure. It's quite possible that she has worms, and we're taking her to the vet on Thursday to get her checked out. Sydney doesn't like being held for long periods of time but she's getting to be a better sport about it. There's a very feral streak in her, as if she were a fighting alley cat in a former life.

Amber is quieter and more thoughtful, and tends to run away from everything (then come immediately back). She doesn't have nearly as much of a food fetish as her sister and is not as gung-ho about playing with us. However, she's like Kitty because she'll play pretend by herself when no one's watching, and go tearing around the house in the process. Both cats play with each other all evening long, and occasionally Booty will join in a chase or two.

Anthrax in the DoD

Customers were scared of his riffs

Last night we watched The Incredibles, which was an all-around excellent movie. The story was cliched enough to be humorous in parody while still having the obligatory kids' message. The graphics were especially good, even better than Finding Nemo, and water and hair were particularly well done. Besides all of that, it was funny, creative, and had a great score. The DVD set is 2-disc, and comes with tons of features, most of which we haven't seen yet. The outtakes are stupid and not up to par with outtakes on other animated movies, but some of the other stuff is pretty interesting.

Of the "new" generation of animated movies, this one ranks up pretty high on my list of favorites, with the Shreks, Finding Nemo, and the Toy Story's.

All the dead links from 2003 news updates have been cleaned up. There's also a new Alias tonight. 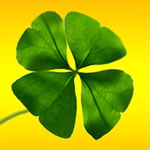 After days of procrastination, I've finally posted the backlog of cuddly cat pictures to the Photos section. There's also a six-part series entitled Snuggles. The plot of this series is easily accessible for kids of all ages, as it involves two kittens sleeping together in various beds around the house.

In addition, here are a few new cat movies for those of you who think that the Internet should be a phantasmagoria of moving bits.

Anna said I was spelling our cat's name wrong, so it's name is now officially Sydney instead of Sidney.

A novel approach to bullies 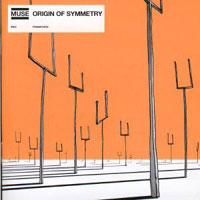 I've been listening to Origin of Symmetry, an import album by Muse, and as usual, I think it's really good. The first half is more promising than the last half, and there are no "hit" songs on it, but it's a real album (something you don't find often these days). One of the things I like about Muse is that their music is accessible and hard-hitting while still remaining artistic and musical. Also, their songs are more heavy-handed than angry and they get some neat effects out of their instruments.

This album is definitely more "noisy" than my favourite album, Absolution, but it uses noise to the fullest effect. Songs are tied together thematically and sometimes through shared ostinatos or noisy segues.

Here are two extended samples from the CD (in easy-to-download mono MP3 format) to give you a taste. Feel free to share your thoughts in the Comments section or on the Forum. I particularly like the chromatically descending chorus in Space Dementia (all twelve tones!), and the reuse of similar bass rhythms between two songs in dissimilar styles.

I have to admit though, that I hate the CD itself. It's one of those fake-out multimedia CDs that pretends to give you bonus computer features so you can't play it on your computer. I had to record the entire thing to a MiniDisc, copy it onto my computer, and burn it to a CD just so I could listen to it somewhere away from my car or my living room.

A movie can't fail when you describe it as 'Titanic in Space', can it?

Anna and Ben closed on a nearly-new townhouse in Manassas today. It's one of those three bedroom / two and a half bath setups with the high vaulted ceiling in the third floor bedroom. Anna and Ben got engaged on 2-22-04, and they put the contract down on this townhouse one month ago today, on 2-22-05. Chalk another one up to the power of 222 -- congratulations! 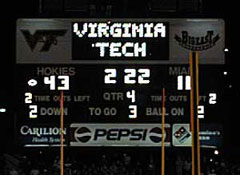 Vaginas open up at Georgia State

'Lost' numbers come up as losers

"Well I'm not about to hop up onto the table!" he says. "Unless Michael does that in court himself, of course." 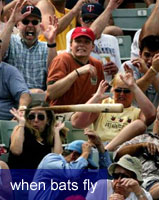 I've added the dynamically generated calendar to all the News pages now, so you can see at a glance which days have important news updates on them. Following one of the links will take you directly to the post from that day.

This leaves a nice aerodynamic black hole at the top of each page. I'm open to suggestions on how to fill said hole. I was considering doing a random cycling through various photos from the Photos page, or possibly rotating banner ads like this one, courtesy of Chris:

Have an idea? Post some suggestions with the Comments link at the lower right.

In other site news, I've helped bring www.nohunters.com back from the dead, for all you Warcraft/Frenzy fans

Ruby Tuesday's redone their menu again and they now have some great Chicken Tenders with mild wing-sauce. Their fry seasoning still sucks though. After dinner, we went out to show Anna's associated relatives the townhouse in Manassas.

I've moved the calendar to the right side of the page, reducing the black hole count by one. I broke down and threw some HTML tables into the code because my CSS books are all at work. Tables get the job done so much faster when you don't plan on changing the site anytime soon. Besides, the W3C validator says my page is perfect in every way, so who am I to argue with standards?

This weekend, I'll add a daily random picture to the news page.

There's now a randomly rotating picture on the overleaf of the calendar. You too have a chance at being the centerfold of the minute!