School prohibits use of Myspace site

...students were informed recently that under a new school policy, Think First, Stay Safe, the use of MySpace.com will be prohibited at school and at home. The policy states that students enrolled in the school can't have a MySpace.com account or any similar type of personal site... 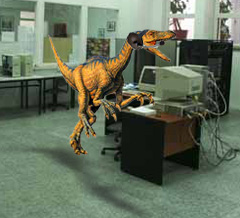 I support this ruling wholeheartedly, but not for the reasons you might expect. It's not because of the fear of cyberbullying, or the dangers children face from online predators like sexual molesters and tech-savvy velociraptors -- simply put, Myspace is one of the most poorly designed sites on the Internet, and to subject kids to it at young ages means that they will propogate the practices of crappy web page design into their adult life.

If we were to compare Myspace to an animal which we could later anthropomorphize in a hit documentary narrated by Morgan Freeman and Al Gore, it would probably be a cross between a rather colourful toucan, a male praying mantis who just lost his head during fun-female-mantis-time, and the feces of a three hundred pound gorilla who's trying to learn sign language but occasionally mistakes the sign for "banana" with the sign for "incest". It's definitely noticeable, just not in a good way. Long after the gentle aesthetics and pleasing curves of the URI! Zone have vanished into the legends of the Internet Archive, future generations will be creating personal web pages with black text on a midnight background, a Nickelback "hit" queuing up to automatically play in the background, and a navigation scheme based upon vague links, technical errors, and twenty percent luck.

The intent of Myspace, to link up people with common interests or backgrounds while making millions of dollars, is actually quite noble (move over Mother Theresa), but its execution is the Tequiza of the web -- mix fermented Fruit Loops with pee in a bottle and then shake it out on all your friends. I once made an account so I could look at all the pictures of my hot friends, but my account was flagged almost immediately by the Myspace Police who didn't believe that someone 123 years old would really be visiting the site.

Ever since I reduced my age to the more believable 69 (in honor of Doobie), I've received no further email from admins, but I do regularly get "Friend requests" from spammers and people I don't even know. Poor Kristal (who's obviously an automated bot for some worthless website that has to resort to lonely Myspacers for advertising) thinks I'm 69 and cute (see evidence to the left) -- it's too bad that my profile picture is the one of Booty climbing up the screen in Tallahassee. Apparently when my face looks like a cat plastered across a window, I'm quite the hit with the ladies -- too bad this cat's taken! 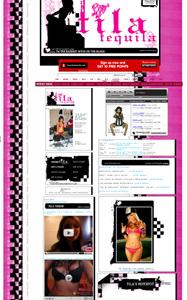 Then again, maybe I'm just not in Myspace's target demographic. There was a story in the Post yesterday about Myspace's latest "celebrity for doing nothing", Tila Tequila

. I have never heard of this celebrity in my life, even though she bills herself as the "new Madonna". For research purposes, I visited her Myspace page

to listen to her single, "I Love U", which already loses two karma points for abbreviating "you". After recovering from the temporary blindness caused by her pustule of a front page, I hit Play and my ear infection returned in full force, as an immune system response to the garbage I was hearing. I would tend to agree with the guy in the article who says, "Her problem is that she's just not that good. As a test case, I'm not sure she's going to measure up because I don't think she has the skill."

There is no doubt in my mind that I, too, could generate mad ad revenue on this site if I were to take off most of my clothes and dance around for your amusement! Want to bet?

Mr. Best agreed to remove the "dickheads and wankers rule" slogan but challenged the commissioner's decision on "we're screwed".

Everybody was admiring a woman who is able to tie crocodiles to her body.

Sexed up monkey returned to owner