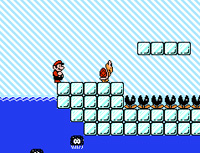 1) Ice: I'm almost 100% certain that ice originated with a pothead Mario programmer who accidentally typed 0 instead of 1 and became hypnotized by the way Mario seemed to effortless glide across the ground like a greased-up piggy on a Slip N' Slide. Short on both time and brownies, he decided to change the colour of the ground from brown to white, call the level "ICE WORLD" and head home. Ice in video games serves no other purpose than to make the controls more frustrating, and to cause permanent thumb injuries as you try to overcorrect your momentum by compressing the keypad in the other direction with a force equivalent to the jaw strength of a crocodile.

Despite these complaints, ice continues to appear in games today, having become one of the standard adjectives (and nouns-turned-adjectives) that game developers can use to typecast their worlds or dungeons (the others being water, fire, big, tiny, desert, forest, light, and dark, though to its credit, Super Mario World tried to add Donut and Chocolate until they were sued by NAPO and NAACP in separate lawsuits). There's even an entire subsection of the latest Zelda game which involves pushing around giant menhirs on icy floors without falling into holes. I would tend to classify this as "not pimping."

2) Unskippable Cutscenes: I realize that since the introduction of the No Child Left Behind act, we're all supposed to pretend to help people read better, but it's a safe bet to say that making the dialogue in your video game move slower will not help anyone out. The worst is when a game puts... one... word... on... the screen at a time, as if that instills them with more drama. In one video game that over-used the "Japanese ellipsis", I actually saw a dialogue bubble where each dot of the ellipsis went up on the screen separately, as if the character had nothing to say, but couldn't quite express this all at once because it was too arduous a task.

At a higher level, every single non-interactive scene in a game should be skippable, because sometimes you really just don't care about the story -- especially the fifth time through Ocarina of Time, or the first time through Trauma Center: The Emo Soap Opera With Extra Cutting. And while we're at it, Marvel: Ultimate Alliance does not need to have fourteen separate company splash screens at the beginning of the game. No one cares who rendered your 3D googaboogas. 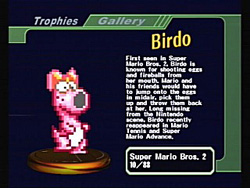 3) Unlocking Features: It's one thing to get access to a super secret level after beating the game, or a new character to play when you clear the Super Chocolate Loop-De-Loop level in under thirty seconds. Recently though, more and more games come with just one or two levels initially open, and require you to unlock pretty much everything in the game through a series of made-up challenges designed to make the game longer than necessary. I'm of the opinion that the fifty bucks I dropped on the counter should entitle me to play all fifty bucks worth of the game because I am a dirty capitalist. And should the memory card for Super Smash Brothers Melee every get corrupted, I would just never play it again rather than try to earn all those ridiculous trophies all over again. 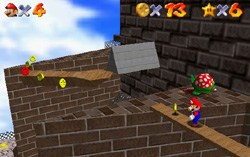 4) Collecting Things: I blame the Mario franchise for this one: "Collect five dragon coins and earn an extra life!" Simple, easy to remember, and (most importantly) OPTIONAL. Fast-forward five years to find that every single Mario game now has two total levels which you have to play through forty-two different times to collect a cornucopia of crap that even a bum looking for redeemable recyclables would skip over. By the end, you've collected so many gold stars, yellow coins, red coins, and blue coins, that you might as well rebrand the game as Super Lucky Charms.

Zelda takes this to a brand new level of infamy with the introduction of the Golden Skulltula (translated roughly as pixelated poop) -- one hundred spiders that could be hidden anywhere on the map that you pretty much have to discover to get better equipment in the game. Of course, if you buy the special Rumble Pak add-on for a mere $40, your joystick (the one attached to the game, not you) will vibrate whenever you're near one! I always wanted my personal joystick to be an arachnid divining rod. 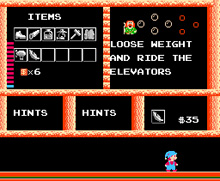 5) Bad Translations: Nothing kills a video game story like a bad translation. Though it's gotten much better in the years since America conquered Japan and outlawed non-English languages, there are still plenty of games out there that were obviously translated literally from their foreign origins by someone who wasn't fluent in either language, but learned colloquialisms from Hong Kong overdubs. The early Final Fantasy games could have been products of running the dialogue through the Alta Vista Babelfish

multiple times, using French as an intermediary language between the Japanese and English. Here is a sample of Babelfishing, from my yet-to-be-released video game, Booty Bay:

Before Translation: Chompy frowned. He certainly did not want to be accused of being all up in her grill, but time was slipping away. "Let's roll," he said.

Translating to French, then Greek, then back to French, then English: Chompy steamed the eyebrows. Of course he did not want that it is marked that is its same in the grill, but ascending time slipped moved away. "let us roll, it said.

Detecting the impossible at a young age