packaging the detritus of my wisdom into easy-to-digest bundles 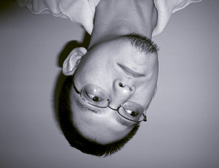 ♣ I've managed to get a little painting in every day this week except for one, and paint fumes have now reached a critical level, causing me to feel high like a monkey dangling from a very tall tree. 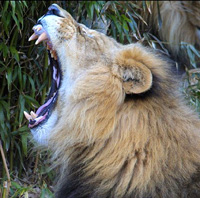 ♣ Though this analogy isn't particular good, it does allow me to reuse this picture of me one final time before I relegate it to the trash. Reuse means I get to expend less effort, which transitively means that I have more energy in reserve, for the day I'm pursued down a long narrow alley by an escaped lion. No one ever expects an escaped lion, and then CHOMP(y), they're breakfast. Doesn't it look like I'm hanging from a tree wondering if that lion is going to make me into breakfast?

♣ When I was constantly working from home at the end of last year (during Super Crunch Time, which isn't just a cereal from the 80s), I got in the habit of eating breakfast every day. Since then, it's been hard for me to revert back to my normal two-meals-a-day routine. Recently, I've been having a light snack at 10:30 and another around 2:00 in the afternoon, followed by dinner at 6. As a result, I have gained three pounds, and now almost exceed the weight of a British "stone". So long, coxswain days.

♣ Sometimes when I look back at my crew days, I realize that for every one great day where I truly enjoyed it, there were fourteen other crappy days where I just wanted to quit. I'm occasionally surprised that I actually did five full years of it. Then again, I probably got more out of it than those five years of undergrad.

♣ A deep thought I read recently, in relation to applying for a job: Having a degree only shows you can stick with something to the end, and certifications show off your memorization skills. Job experience is the only real measure of how capable you are, and even then it's not infallible.

♣ It's a good thing that none of you has a job as a bass-line guesser. Apparently Wednesday's Name That Tune contest is much, much harder than I expected it to be. I figured the winning entry would have 6 to 7 correct answers, but the high score of the moment seems to be around 5. I will not give out any more hints, but I may decide to increase the size of the prize to spur competition. Maybe some of the musical cripples can band together and form a corporation for the duration of the contest.

♣ It has just come to my attention that "musical cripple" is no longer politically correct. "Musicologist" or "Undergraduate Music Education Major" are both more acceptable.

♣ My weekend is pretty booked up at the moment -- I have Movie Night plans tonight, St. Patrick's Day plans tomorrow, stairway recarpeting plans on Sunday, and then I'm taking Monday off to recarpet the living room. It looks like I'm on track to finish the kitchen and living room by the end of the month, and then April will be "Do the Bathrooms" Month (not "Doo the Bathrooms" Month, because that's every day). After that I'll be done doing manly house stuff for a few months, though I will probably reconvene in October to turn the basement into a cosmic bowling alley.

♣ Have a great weekend! Happy Birthday Andy Norton on Sunday!