it's that time of the month again (the end of it)

♣ Work has continued on the home improvement front this week as I tore up two layers of linoleum flooring dating back to 1978 in the kitchen. This is a dangerous job for the anemic, since the sharp edges have given my hands more nooks and crannies than a fork-split English muffin. With the help of URI! Zone readers, like Diana, who can see more than two and a half colours, I also picked out some gold-yellow curtains for the living room, which really accentuate the Asian geopolitical undertones of my house.

♣ Once the kitchen floor is redone, I'll need to find a new place to stash Anna's piano, which is about to celebrate its third year anniversary in my house from a lack of people willing to move it. Pretty soon its 401k will be 100% vested. I also need to paint the trim in the kitchen, though the Nougat-branding of the walls is complete all over the upstairs now.

♣ At work this past week, they painted the stairwells with a thick, shiny coat of industrial grey paint. The air is such a swirling miasma from the lack of ventilation that my twice-daily trip up and down the five flights from the office is now a cost-effective way to attain a temporary state of euphoria. 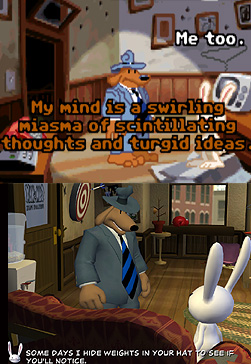 ♣ Speaking of swirling miasmas, I've been playing the new Sam and Max games, the episodic sequels to the funniest computer game ever made (Sam and Max Hit the Road, 1993) and enjoying them enough to laugh out loud on occasion. The game (and original comic) features a dog and bunny detective team fighting crime and spouting non sequitors. Telltale games is releasing a new "episode" every few months for $9 (or you can get all six for $35) and they're definitely worth the price if you like absurdist humour.

Max: Sam, either termites are burrowing through my skull, or one of us is ticking.
Sam: Oops, oh yeah. [pulls out the time bomb] Max, where should I put this so it doesn't hurt anyone we know or care about?
Max: Out the window, Sam. There's nothing but strangers out there.
Sam: [tosses the bomb out the window and ducks when it explodes] I hope there was nobody on that bus.
Max: Nobody we know at least. 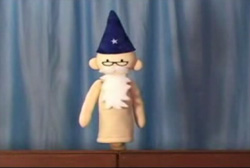 ♣ Speaking of ticking, I can't stop watching Harry Potter and the Mysterious Ticking Sound on YouTube

. It's a nonsensical clip in the vein of the classic Bulbous Bouffant skit which I've referenced many times in the past

(3MB MP3), and it's made twice as amusing through its use of puppets. The puppets are key, especially Naked Time Dumbledore.

♣ My weekend will be slightly, but not very, active. On a Lucky Charms busy scale from star to clover (where star is the laziest and clover is the busiest), I'd say it's a moon. On Saturday night, I have plans to go to the Old Dominion Brewery with Rebecca and some of her friends -- a place I've never actually been to, despite living within three miles of it for the past three years. I did pick up Chris and Kathy from a Beer Festival there once when Kathy was HAMMERED. On a hammer scale from ball-peen to claw, she was probably a sledge.

♣ On Sunday morning at 10 AM sharp, my dad and I are installing the laminate flooring in the kitchen / dining room. Sunday is also Cheryl Sherling's birthday, and April Fools Day. I haven't done much for April Fools Day in recent history though -- four years ago, I changed every single word on my page to "bork" and automatically loaded a repeating MP3 of the Swedish chef

and then gave my sightsinging students a ridiculously difficult dictation example to scare them all into wetting themselves.

You don't want to bite the ears off of this one