broadcasting coded messages about aliens since 2005 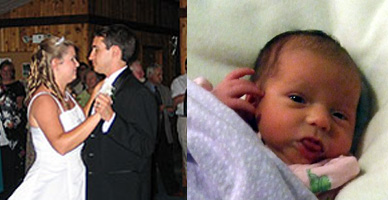 ♣ Congratulations to Philip and Kara on the birth of their first daughter! Sadly they did not name the baby "Malibu" -- Madison Grace Barbie was born on Sunday, March 4, weighing 5 lbs 15 ozs. Mother and child are doing fine

♣ The next baby on the baby-assembly-line will most likely belong to Anna and Ben. Since their due date is March 27, I am now taking bets on the actual date of birth. The person who guesses the closest to the actual date will be allowed to name their baby. I have not yet cleared this contest's prize with the parents-to-be, but I'm sure they won't mind. My vote is for March 28, and since I have supernatural powers that can sense when babies are ripe, you all have probably already lost. 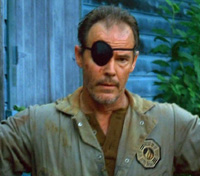 ♣ I've been disappointed with this season of LOST, though Wednesday's episode was a tiny step in the right direction. Other than Desmond's episode with the jewelry store owner, the episodes have figuratively (in one case, literally) been driving in circles. When you think about it, the pace of these episodes is very close to the great Season One, where not much happened each week. The only difference is that everyone's been waiting for two years for answers, and the original storytelling formula is no longer good enough.

♣ It would be nice if shows were only as long as they needed to be to tell their stories. The 4400 is a great example of this -- each season is twelve episodes long and continues to push the story forward. I would definitely watch and enjoy 18, featuring Jack Bauer in action without all the driving around the city.

♣ Anna and I are over halfway through the fifth season of 24, which (so far) is easily the best season of the first five. The new soundtrack is much better than the throwaway melodramatic orchestral gestures used in the previous seasons, and there have been no annoyingly worthless characters getting amnesia (though there is a slight misstep with one of the guest appearances for about three episodes). If there were a spinoff show starring Kim Bauer being chased by cougars and becoming a hostage in a liquor store, I would totally watch it, as long as every hour ended with her dying in some fashion, Kenny-style. 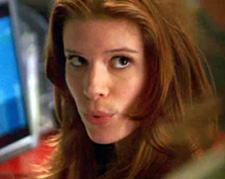 ♣ We were noticing the other night that 24 really has a problem with casting their female roles. They relegate all the good actresses and eye-candy to secondary or temporary roles, like Kate Mara as Shari Rothenberg, the hottest (psycho) chem major ever to work in CTU's basement (who incidentally looks strikingly like a girl I had a huge crush on in junior high). If they would cast the Shari's of the show as Jack's love interests or family, maybe we would actually feel some sympathy for Jack when he gets so emotional about saving his loved ones. Instead we get Kim Bauer and Kate Warner, horrid actresses and funny-looking human beings. I'd sooner watch Jack Bauer shout, "Damnit, there's no time for that!" for an entire hour than see him tear up over his useless excuse for a daughter. 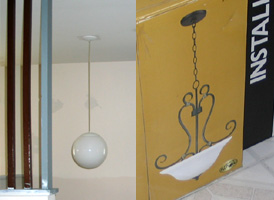 ♣ This weekend, my plans include dinner with the owners of the gay honking kitties, helping an old friend move back to Alexandria from Texas, hosting poker, prepping the living room for painting, and hanging a new light in the foyer to replace the 1970s Space Bubble that's currently there. I'll also be tabulating the results of the Lyrics contest (vote by Sunday!), removing the double votes that Shac added for the song about himself (as if I have more than one visitor from Israel), and preparing for the next 12 of 12 (on Monday!). There will also be a brand new NAME THAT TUNE contest next Wednesday, but with a twist!

♣ Today is also Mark Connor and Larry Newdorf's birthday. Happy Birthday! Have a great weekend everyone!