My memory is very strangely configured, much like every room on Trading Spaces after those crazy designers get through with their green denim wallpaper. My short-term memory is pretty weak unless I write things down, which is usually why it takes so long for me to finally remember to run important errands. As mentioned in bullet #42 of my 222 Things About Me

, I have a keyed long-term memory: Very few of my memories are easily-accessed and near the surface -- it takes a triggering event for me to remember the details of that event, but then the floodgates open and I remember everything about it, even the embarassing things that other people would prefer be forgotten. 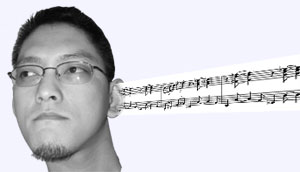 Although it's nice to know that my brain is a figurative oil well of undiscovered anecdotes and previously epiphanized epiphanies, I do occasionally run into issues when I try to be newly creative. I have no doubt that some news updates from the past year are repeats of early years since I remember very little of what I wrote so long ago. More telling is when I compose a new idea that ends up being something already written. In 2003, I wrote about the melody that I eventually discovered was eerily similar to a video game theme from many years earlier

. This same scenario just repeated with the "Write My Lyrics" contest, specifically the end of the chorus.

Last week, while sorting my complete discography of Milli Vanilli / Bob Dylan duets, I came across one of several Kansas CDs which I hadn't really listened to since I left Florida. A very brief transition in one of the songs, The Wall very closely resembles part of my original melody, right down to the chord progression (I actually prefer theirs, and wish I'd thought of it first).

This unconscious adaptation makes me wonder just how much inspiration relies on other sources, and how much actually comes from a unique fount of musical ideas!

Basketball coach has her priorities in order