How long is too long for a movie?

"I do agree you can't just make movies three hours long for no apparent reason. For a romantic comedy to be three hours long, that's longer than most marriages," Fincher said. 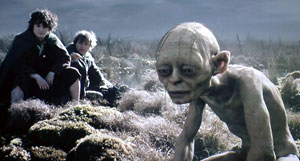 This story on CNN.com notes the recent trend of movies to stretch towards the dreadful three-hour mark, a trend popularized by the unfortunate "made-for-BBC-miniseries" trilogy, Lord of the Rings. It's a little known fact that the actress who played Gollum was originally a fresh-faced hottie plucked straight from the Disney afternoon lineup (to boost the movie's Hollywood appeal), but the movies took so long to film that she became the gaunt, spirit-crushed eyesore you see in the final cuts.

There is always inner turmoil between my inherited "get your money's worth" gene and my "attention span's so short that they should show multiple movies in tabbed windows" gene, but in this case I side with the attention span gene. Movies today are definitely too long -- two hours is a reasonable and traditional length of time for a movie, and they should only be longer in very rare cases. One needs to look no further than Bad Boys II for an example of this phenomenon: a horrible movie which takes a whopping 144 minutes to explain why Will Smith and Martin Lawrence shoot stuff

. In my rewrite of the movie, I managed to cut it down to 14 minutes, after which Smith puts Lawrence out of his whining misery with a bullet to the back of the head.

As a public service, I have created a shortlist of rules to follow when determining how long your next movie should be.

Teens take the fire out of ostrich's cracker