this is your brain in drag

. Earaches are the only thing that can make my ears bleed outside of a Contemporary Music Festival, and this one did manage to lay me low for a couple of days.

♣ Bleeding ears are not normally fodder for discussion here, but I'm trying a new shock-value thing to up my ratings -- it worked for Fear Factor! 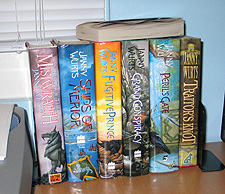 ♣ Between all the suffering and painting and flooring and wenching, I've picked out a new project to occupy my time in the coming months: I will become a contributor to the newly-formed Wiki for my favourite series of all time

. The War of Light and Shadow series is one point of the triumvirate of multi-medias I tend to push on unsuspecting friends (the other two points of the triangle being Memento, and Alias), and I even wrote an Amazon review a couple years ago that became a Spotlight Review

♣ I'm sure the fact that all of you visit my site on this interweb thing means you've heard of Wikipedia, at least in passing. The Wiki idea is also used frequently to create more specific encyclopedias (there's even one for all things 24

), and since the unfinished WoLaS series is already epic in scope (probably over six thousand pages already), I think a massive glossary would be very helpful to other readers.

♣ I once wrote a post about my desires to write a definitive source on the web, but I can't remember when it was and I can no longer find it in the archive. Because the evidence is gone, the next fragment contains BRAND NEW INFORMATION.

♣ I've always wanted to create one of those sites on the web containing everything you ever wanted to know about      (past ideas to sit on my underline were Alias, Finale tricks, Frequently Asked Questions by Kathy and Mike about Finale, Finale workarounds, music theory, the Java MIDI packages, and dressing your cat). The two obstacles that were always in my way: 1) Usually after I enthusiastically create the initial baseline for something, I get bored and move onto another project. 2) Almost every topic that I might be an "expert" on is a topic where a million other people are at least twice as expert-y as I am so I'd feel like a big poser. However, I'm sure that no one within two degrees of separation from me is as fanatical about this book series as I am, so it should be a good fit! Plus, as you can see from the daily Pulitzer material I write, I do have a way with words. 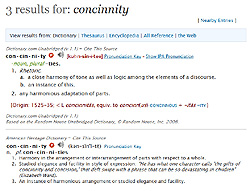 ♣ A couple nights ago, I had a dream that was obviously sponsored by the word, "concinnity". People in the dream kept using it in conversation, it was written on walls, and randomly popped up out of context. The word was so etched in my brain that when I woke up I immediately wrote it down to see if it was a mystic sign that might lead me to buried treasure. It turns out that "concinnity" is an actual word, and means harmony in the arrangement or interarrangement of parts with respect to a whole. I have yet to figure out how this word will change my life, but if I find any riches or doubloons, you all ain't gettin' any.

♣ My weekend plans are pretty light compared to the rest of the month of March. I'll probably just paint the kitchen, work on my will, and dive into my new pet project, as previously mentioned. There are no birthdays this weekend -- in fact there are none on my calendar until April -- so all you preggos better start popping some babies out!