I celebrated my first Labour Day in northern Virginia in eight years by coming in to work. That way, I can take off Monday the 15th using a bare minimum of leave time. Work's been pretty slow recently, mainly because of an increase in troubleshooting time rather than development time.

The end of the summer dumped a good ten percent increase in cars on every road at every hour of the day. Many of the drivers seem unfamiliar with such simple concepts as "flow of traffic" and "accelerating through green lights". You can spot the people who didn't commute all summer because everyone else is driving around them while they amble down the left lane.

The Hokies beat Central Florida at home last weekend. Unlike last year, the team didn't crumble at the first sign of a comeback even though they squandered their original 21 point lead. Final score: 49-28.

The First Season DVDs for Alias were released on Tuesday and are of excellent quality. The boxed set goes for $39.99 at Costco and contains six discs with the first twenty-two episodes (each around forty-five minutes long). Sound was redone in Dolby 5.1, and the picture is in the high-resolution HD-TV format that the show was originally broadcast in. There's plenty of extras for fans, and the storyline is much easier for newcomers to follow when they can watch all episodes in the right order. Go rent it at Blockbuster, and see why this show had 11 Emmy nominations in 2001.

I have no big plans for the weekend. I've been working on a custom mod for Warcraft III that should finish its testing phase today, so I'll try and post it here before Monday rolls around. I've also got a few musical things to take care of, and hope to get out to a mountain and/or waterfall at least one day this weekend. 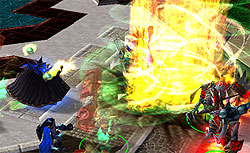 My extracurricular project for last week was the creation of a custom Warcraft III mod called Micro Arena, pitting two or more opponents against each other to see who has the fastest reflexes and steadiest control. You can download the map in the Games section under Warcraft III maps (Frozen Throne expansion is required).

Virginia Tech beat James Madision University today, 43-0. I don't think anything more can be said about that.

Because it's so believable 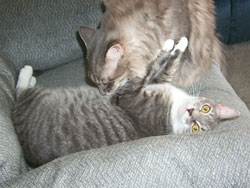 I haven't commented much on current events recently because I spend a lot less time on the computer at home, now that I work at a computer all day. I generally read the news at work in the morning, so by the time I get home my scorn over Bush's latest stupidity (pick one) has faded into apathy and indifference.

It's been a long week at work so I haven't felt like updating a great deal, but today I've added a few new cat pictures and posted a newer version of Micro Arena on the Games page.

Now that the weather is cooler, I've decided to take up running in the evenings again. Saying I'm out of shape is an understatement.

Only four days until my birthday!

The amount of traffic reduced by people being scared of Hurricane Isabel is directly negated when some clown in the Department of Transportation decides to repave two lanes of Route 28 during rush hour.

I watched the movie, Identity, last weekend. It was pretty good although the plot was easy to figure out early on. John Cusack is not annoying in it, the way he is in most films.

The hazards of Justin Timberlake 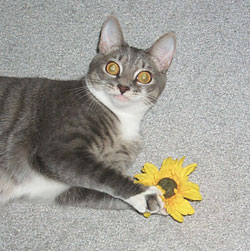 The longer I go without an update, the more difficult it is to sit down and actually write one. I've been up to the usual shenanigans here and I'm happy that the weather is actually getting cooler in September. Hurricane Isabel gave us a lot of rain, but the power never went out and I managed to go to work the next day without problems. There were a few downed trees and dead stoplights but that was the extent of the damage on this end. I hear, though, that Old Town Alexandria and Belle View flooded out, putting people hip-deep in water along the Potomac.

I created a new custom game for Warcraft III called Burrow Command. It's similar to Bunker Command from Starcraft, where the goal was to destroy other players' bunkers while defending your own. You can get the latest version (1.01) from my Games page under Warcraft.

I finally finished watching the first season of Alias which looks great in that special HDTV format. The third season opens this Sunday -- good times. On a side note, Alias received eleven Emmy nominations again this year, including Best Actress, Best Supporting Actress, and Best Supporting Actor, and actually won two of the eleven. On a further tangent, the Emmy broadcast was inundated with annoying new commercials, like the beeping Nextel commercials which have to be the most obnoxious commercials of all time (not including the smarmy truth commercials).

The music at the Emmy's was pretty horrible as well. Some not-too-clever arranger took the theme songs for every sitcom of every presenter and winner and set them to Muzak orchestrations with strings and everything. Songs like the theme from The Sopranos just weren't meant to be arranged that way. The Sopranos won several Emmy's including best writing for an episode (which wasn't hard considering it had 3 of the 5 nominations in that category).

As always, there are new cat pictures on the Photos page. Kitty just ate a grasshopper.

The Bugler is Dead

The secret to composing memorable music

This has got to be the stupidest thing I've heard this week:

Junior Achievement is projecting that the lesson, which will be taught both in school and after school, will be used in 36,000 classrooms nationwide and has the potential of reaching 900,000 students in grades five through nine, or about 10 percent of all students in those grade levels.

In the role-playing activity Starving Artist, for example, groups of students are encouraged to come up with an idea for a musical act, write lyrics and design a CD cover only to be told by a volunteer teacher their work can be downloaded free. According to the lesson, the volunteer would then "ask them how they felt when they realized that their work was stolen and that they would not get anything for their efforts."

Besides sounding like an activity out of a first grader's "Community and Sharing" social studies book, it's a poorly designed activity where the build-up is much larger than the lesson learned. Plus, any good teacher would be hesitant to give a lesson where the lessons-learned question is so open-ended and prone for tangents and dissent.

Since the RIAA and movie companies probably will not be able to come up with good activities on their own, I have devised one that they are welcome to use, that may actually affect more than 1% of future filesharers.

In the role-playing activity Guillible and Stupid, for example, groups of students are encouraged to stand behind a skittish horse shaking tin cans, only to be kicked in the face by the horse. According to the lesson, a volunteer would then "ask them how they felt when they realized that they had been kicked in the face by a horse and that this was how all filesharers were punished."

While we're on the subject of filesharing, I have a downloaded copy of the song, Politik, by Coldplay. Downloading Coldplay off the Internet led directly to me purchasing both of their expensive CDs (which I would never have done otherwise), but that's not the point of this anecdote. This particular piece opens with two bars of steady eighth notes pounding out a dominant seventh chord resolving into two bars of the same rhythm on a minor tonic triad with an added eleventh. However, the downloaded version of the song only has seven beats of dominant, followed by a full two bars of tonic. Evidently, this is one of those placebo songs placed online to prevent someone from getting the real version (If you try downloading popular artists, you will occasionally get a snippet of the chorus looped over and over for the duration of the song).

The sad thing is, the abridged version is actually better musically than the original.

Allowed to rebut what Statham ruled was a personal attack, Schwarzenegger said, "I would just like to say that I just realized that I have a perfect part for you in 'Terminator 4.'" He also suggested that she might need "more decaf."

In Virginia, not only do the trees have leaves, but they actually fall off as the weather gets cooler.

Computers crash in the Ukraine

Times when identity theft is not a good idea