An artsy film about an addict history teacher trying to teach dialectics at his inner city school. Interesting and strong enough to warrant Gosling's Best Actor nomination, but forgettable overall. Rated R, probably for drug use, sexuality and the death of a kitty from old age. 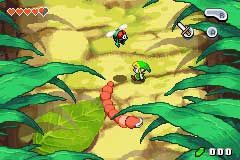 A classic Zelda-game that plays like the kindred spirit of A Link to the Past (SNES). This is as close to an old-fashioned Zelda experience as you can get, and it's still quite playable on the DS. Where the original game used the Light and Dark Worlds as a way to breath a double life into a single game map, Minish Cap employs a chicken that sits on Link's head (and looks like a cap) which will shrink him to tiny sizes. The game is huge, especially for a handheld title, and only rarely gets frustrating.

This movie was the second half of a double-feature (the first being Half Nelson) intended to end the evening on a lighter note. Surely everyone's seen the ads -- Will Ferrell is a boring accountant who wakes up one day and discovers that his life is being narrated by a voice in his head, which might lead to his ultimate death. There are no laugh-out-loud Will Ferrell moments, but the entire movie is amusing at the chuckle-level and surprisingly meaningful by the end. This is the type of movie Jim Carrey would have tried to do four years ago and destroyed beyond recognition. Ferrell actually pulls it off with a bit of class and pathos. 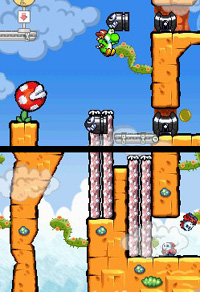 This game had so much potential to be great, but completely wasted it. It employs at least two of the "Things I Hate in Video Games" (an entry I'd planned to write last week, but which will probably be pushed off until next week). Yoshi's Island is an old-fashioned 2D platformer with Yoshi as the main character. Yoshi can carry babies on his back, like Mario, Donkey Kong, and the Princess, and each baby gives him a different power, like running fast or floating through the air. He beats enemies by eating them and pooping out an egg, which he can then throw at other enemies.

At this point, the game sounds great, like a flute recital before the first song. It's only when you start playing the game that you realize just how frustrating it is. The control scheme works just fine, but you don't immediately die when you get hit by an enemy. Instead, the baby falls off your back into a floating bubble, bouncing around the screen on a random path and crying incessantly. By the time you get the baby back, it's probably floating over an enemy, which means you'll just lose the baby again immediately and have to repeat the process. While the baby is floating, your stash of collectible stars drains away, and when it hits 0, the baby gets kidnapped in an uninterruptible cutscene and you have to start over. Meanwhile, your collectible stars are also necessary to meet some of the goals in each level, so some might argue that dropping your baby in the game has even worse consequences than real life -- you'll have to restart the level! Only get this if you're a masochist -- you will want to throw your DS at your cat at least once per level.

Similar movies always seem to come out in groups (see also, Armageddon and Deep Impact, or Requiem for a Dream and Bambi). This is the sister movie to The Illusionist -- both movies are about turn-of-the-century magicians. The Illusionist was a love story with Ed Norton as the magician who proved that sleight-of-hand wasn't just a term to insult Middle Eastern thieves. The Prestige tells the tale of two rival stage magicians and their back-and-forth attempts to sabotage and outdo the other's act. This movie was very engrossing to watch, and I did enjoy it, but after it was over I still preferred the other movie. The payoff of the last third of this movie is neat, but seems to be only tangentially related to the thrust of the main theme. Still, it's worth a rental.

Refrigerator will toss you a can of beer