It's always seemed to me that the education system should gradually increase in difficulty and effort as you progress (see also, any arcade game from the 80s). In American society, the scale seems skewed, with high school entailing high stress and a mad rush to prepare for college, and college being a collosal waste of time (this imbalanced buildup and letdown is also reflected in the Matrix trilogy). I can't remember either phase of life being particularly hard, but I do remember that my schedule in high school was far more packed than it ever was in a year since.

For example, put on your baggy time-jumping pants and jump back with me twelve years to March 26, 1995. I was a junior in high school with big glasses and even bigger dreams1. Despite my social malfeasance, my calendar was regularly booked 100%. In 1995, the 26th was a Sunday, and I opened the day by spending four hours working on Jack Wilmer's Eagle Project. I can't remember what his project was anymore, but it probably had to do with kidnapping children and stealing their fingerprints, or diverting the flow of an arbitrary creek to increase erosion near new subdivisions. 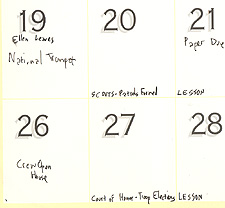 Following the Eagle Project, I went home for lunch around 1, then turned right around and went to the Boathouse on the far side of the city for a Crew Open House. Our cadre of nine took one of the new shells out on the water to do some stunts for the visiting parents (common stuff like "glide on the water" and "dive to one thousand fathoms"). From Crew, I went back home (we lived in a pretty inconvenient place for a Crew family) and biked the four miles to the high school to play Ultimate Frisbee with the Frisbee Club. I did a lot of biking back then, because Virginia does not allow fifteen-year-old midgets to get anywhere near a steering wheel. Once frisbee was over, I biked back home and had dinner with the parents, playing the role of sullen teenager who hates being the center of attention ever since his sister left for college. After dinner I went up the street to take care of the neighbour's chihuahua, Rusty, worked on my vocabulary worksheet for Chapter 20 of American Civilization (only retard teachers assign vocabulary in a history class) and finally wrote all of this up in my secret diary around 9 PM.

Now take off your pants and put on your time-warp helmet as we fast forward four years into college.

March 26, 1999 was a Friday in my third year of college. The glasses and Members Only jacket had given way to contacts and a pompadour, and I was living with Nathan Egge in East AJ. At this point, I was taking 19 credits of classes: Operating Systems (slept through it, got an A), Applied Combinatorics (this wasn't the woodpeckers-in-pigeonholes class, but it was equally as insipid and sleepworthy, got a B), Contemporary Music Literature (sat in a room listening to Jon Polifrone talk about how much he liked Rolling Rock, got a B), Symphony Band (3 hours a week of sitting around waiting for the oboes to learn their part, got an A), Jazz Arranging (never had class because Chip McNeill was always out of town, got an A-), trumpet and composition lessons (got As), and Probability and Statistics for Electrical Engineers (this class was so nondescript that I didn't even remember taking it, A-). Besides this harrowing courseload, I went home every other weekend to harass hometown honies -- extended trips that usually started on Thursdays and ended on Mondays.

According to my secret diary (which will soon be published as A Million Little Asians by the same company that published James Frey's book), the only thing I did on the 26th was to play Starcraft all day long with Philip Barbie. And not even the challenging variety -- we would just make maps with ever-increasing amounts of super-hard computers and see how long it took us to win cooperatively.

How did your schedule evolve as you grew up?

1: This will be the ad copy when Disney makes a feel good movie about my high school days.

These U.S. Raids In Iraq Look Real, But They Aren't (burma shave)

Pimp of the Year gets 23