The URI! Zone turns 25 years old this month which means that I should probably commission a celebratory parade in a local arena, complete with commemorative coins. I, too, have evolved subtly in this same period. 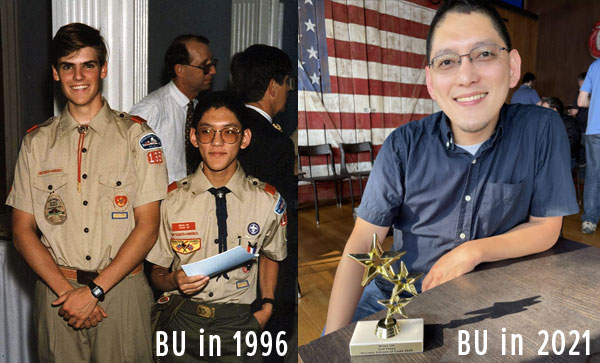 Though the URI! Zone was quite popular in the Web 2.0 era, it has shed visitors down to just a diligent few. (On any given day, 50% of traffic is Doobie, Evil Mike, or someone related to me). This reduction has been exacerbated by the general decline in blogs and people wanting to read blogs, such that the URI! Zone sometimes feels like an ancient diner whose interstate entrance was blocked in the name of progress, and the only people around anymore are crusty locals willing to drive on four miles of back roads for the 6 AM flapjacks and discussions about the weather.

Still, everything I've ever written is carefully preserved here with a twofold purpose: (1) to thwart any future runs for public office by putting my most juvenile thoughts up for everyone to see, and (2) to eventually train a machine learning algorithm to write new blog posts for eternity, so you'll never be quite sure if I've already died. #2 may or may not already be happening but covfefe.

By the numbers, here's what the URI! Zone looks like today:

Thank you for your continued friendship and readership! TWENTY-FIVE MORE YEARS! 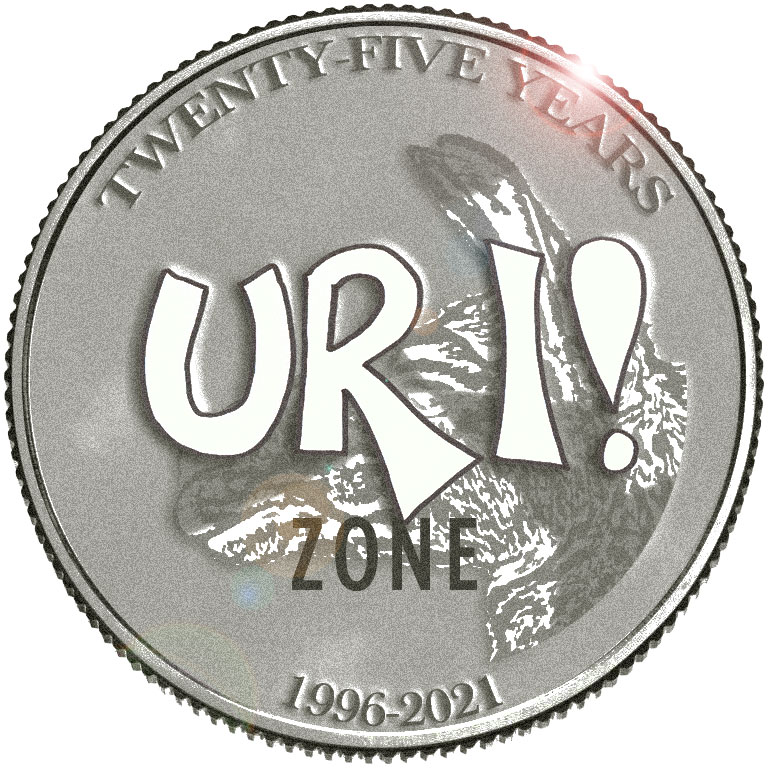 This picture was taken thirty years ago, in July 1991. 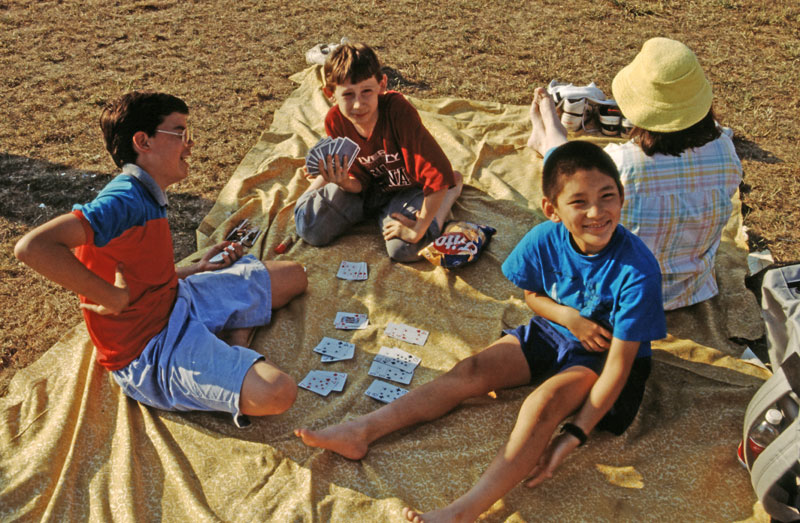 We're sitting on the Mall waiting for the Fourth of July fireworks, and we arrived hours early to stake out an uncrowded claim. (These skills would later come in handy at Wolf Trap). My friends, James and Ian, came along for the trip and we spent the afternoon alternating between card games and finding the nearest port-a-potty.

The picnic blanket we're sitting on was the defacto picnic blanket kept in the car trunk for all sorts of weekend trips up and down the Eastern seaboard. The back always had little bits of dried spackle from the blanket's previous life as a drop cloth.

I actually looked up Ian after pulling out this photo and he added the following context: "I remember James's parents were mad because he never got in touch with them before we went and they showed up to pick him up from your house. Such a pre-cell phone problem".

Nobody (R):
This is a throwaway action flick starring Bob Odenkirk as a middle-aged nobody who gets pushed around one too many times. It uses ultraviolence for an almost comic effect, and is good, shallow fun. It was also nice to see Christopher Lloyd in a guest role.

Mystery of Mister V by Von Smith:
Von Smith's second album is another collection of bombastic, musical theater-like songs that are lots of fun to listen too but a little too eclectic and genre-jumping to gain a wider audience. Nothing Like This is a good example of his style, which sometimes feels like the lovechild of Mika and Nate Ruess.

Happy Endings, Season One:
This sitcom from the post-Scrubs era feels comfortably traditional. It's a fun watch when you have an infant and cannot commit any brain cells to following a more complicated serialized plot. Free on Netflix.

Miss Saigon: The Definitive Live Recording:
This recording is fine. There are no glaringly bad or distracting singers, unlike the London and Broadway recordings, but there are also no standouts. Most of the lyrical changes feel like useless bikeshedding that are no better than what was there before. The big change in this production was the replacement of an entire song for the Ellen character -- the new song is completely forgettable. 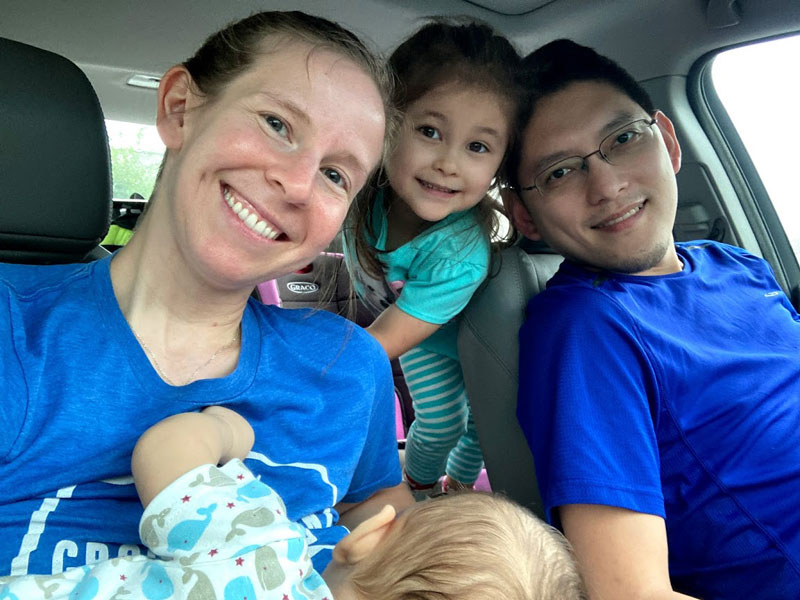 We made it to Sandbridge after only 8 hours of tribulation! 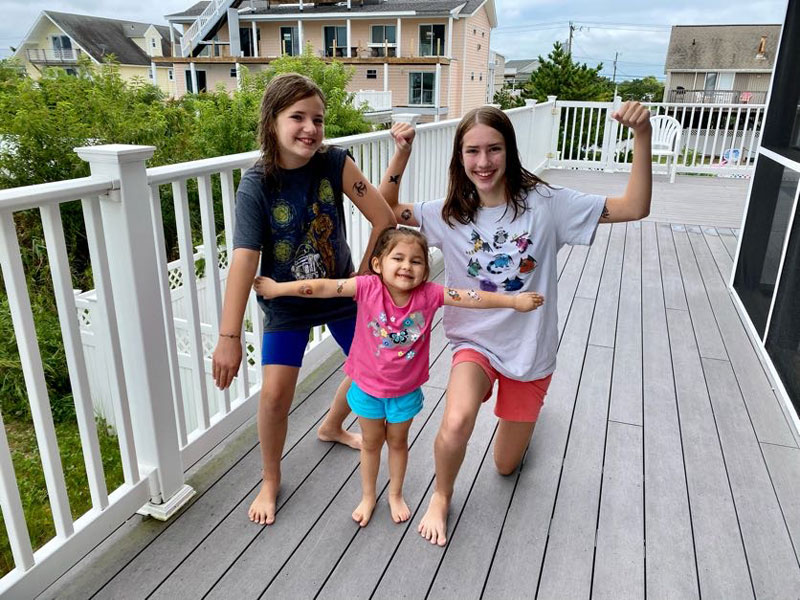 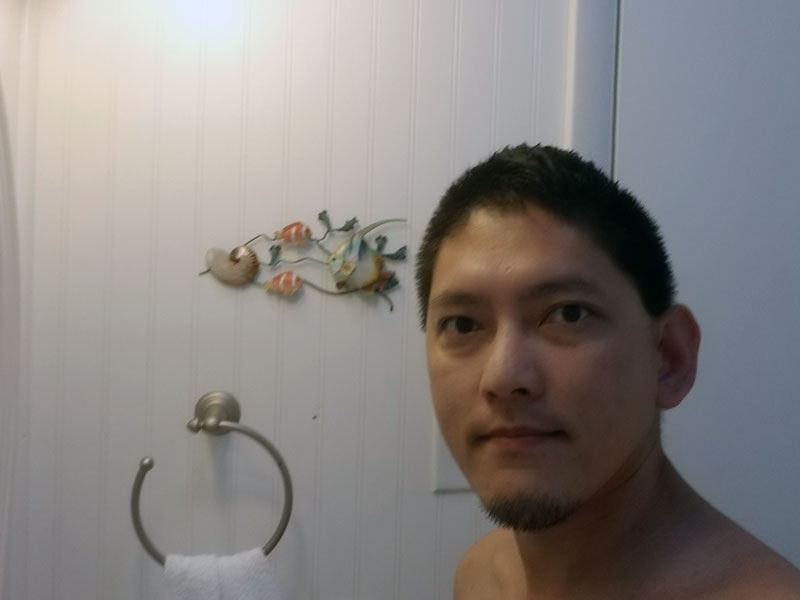 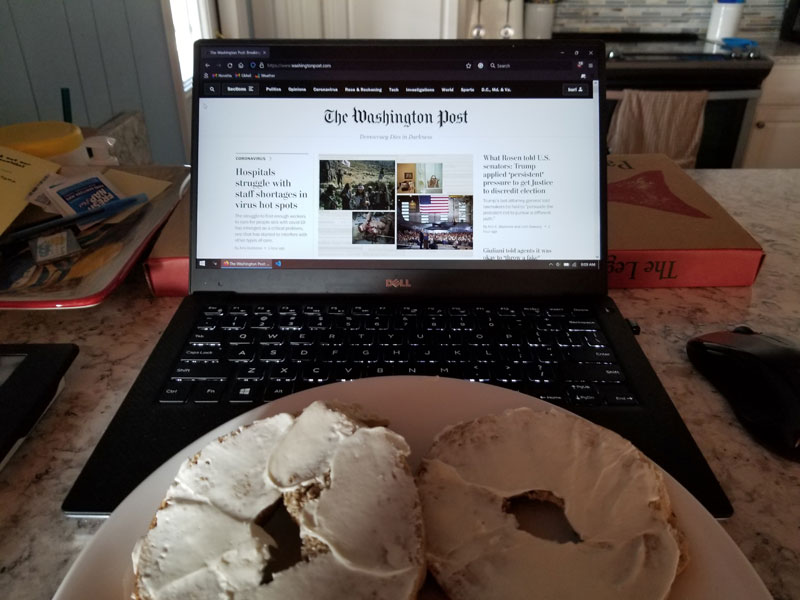 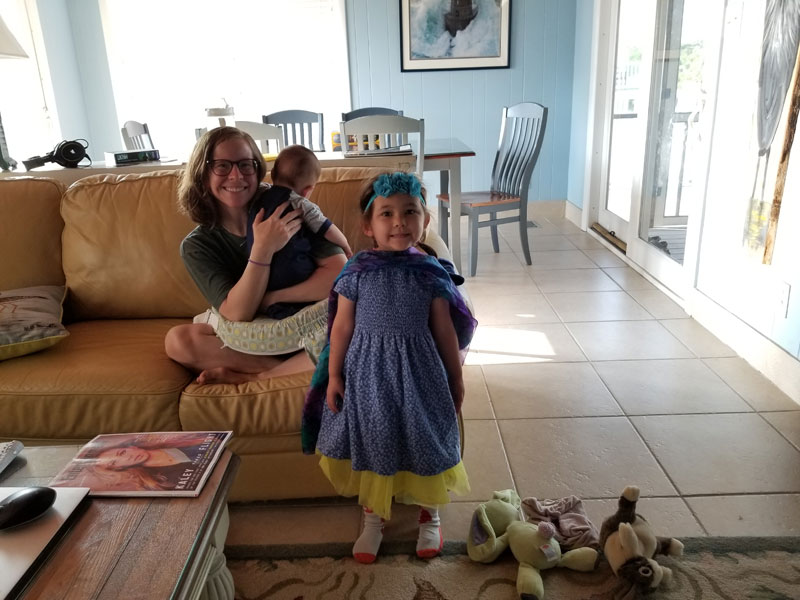 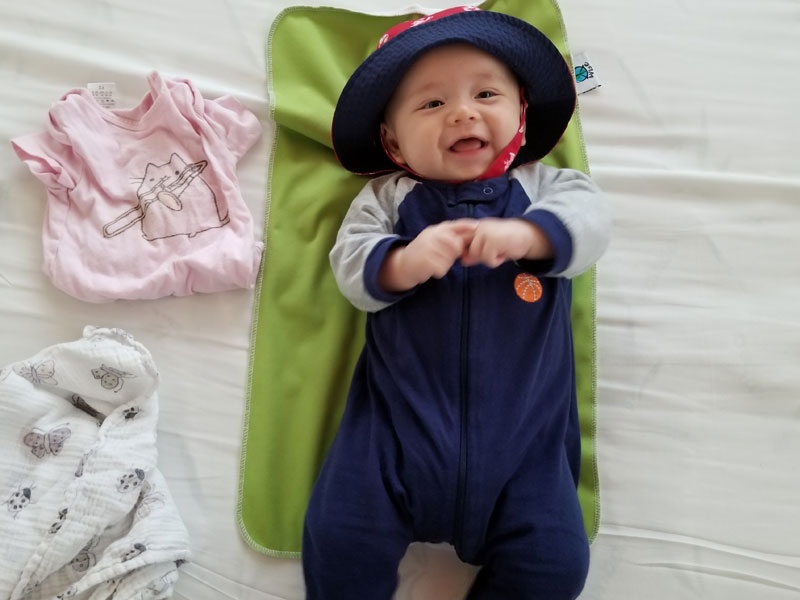 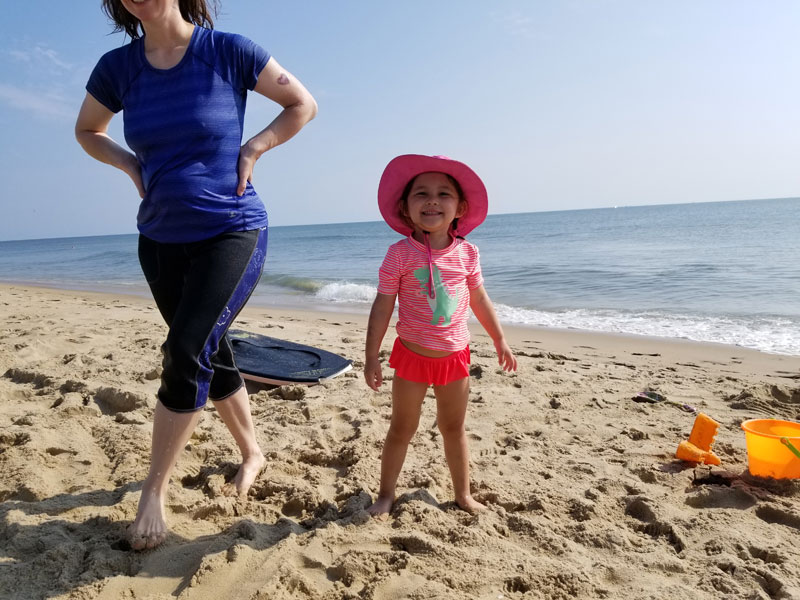 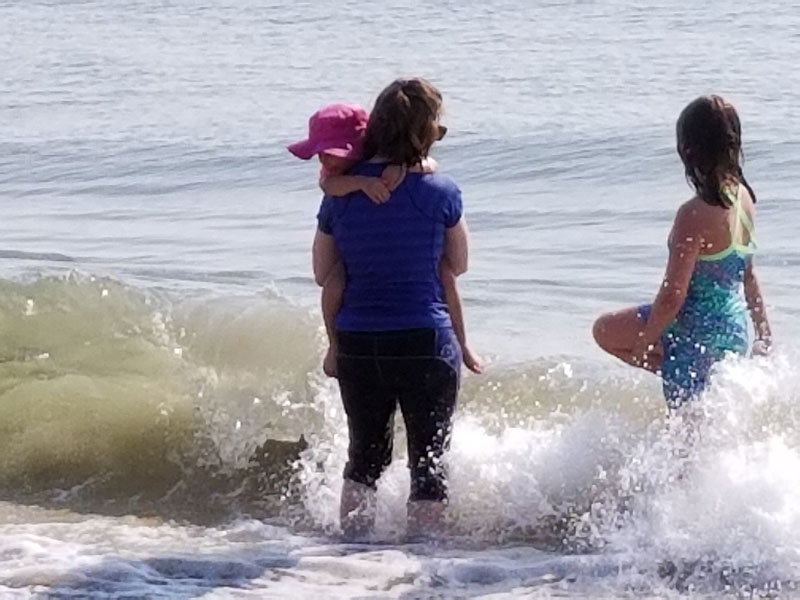 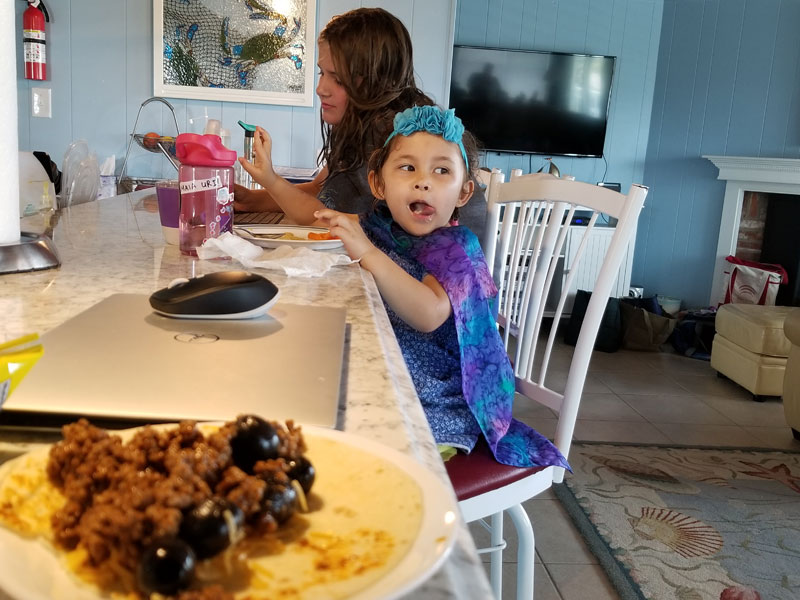 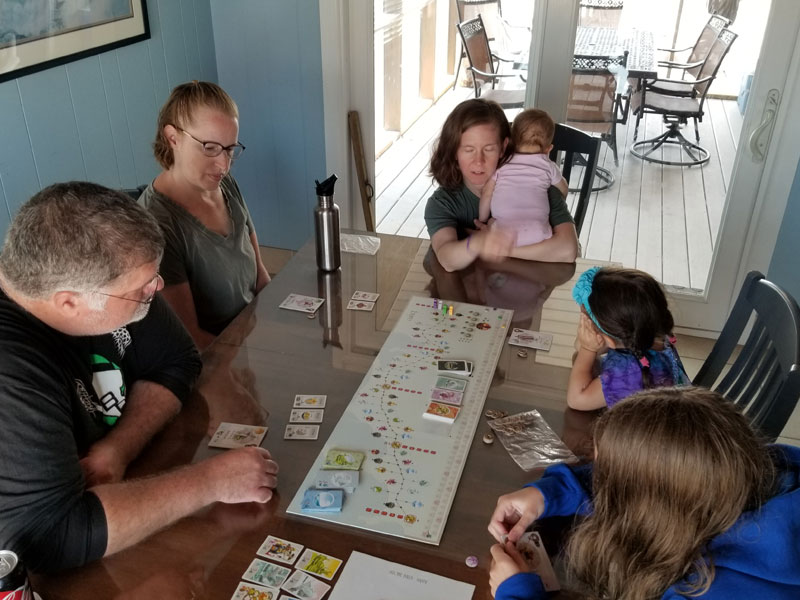 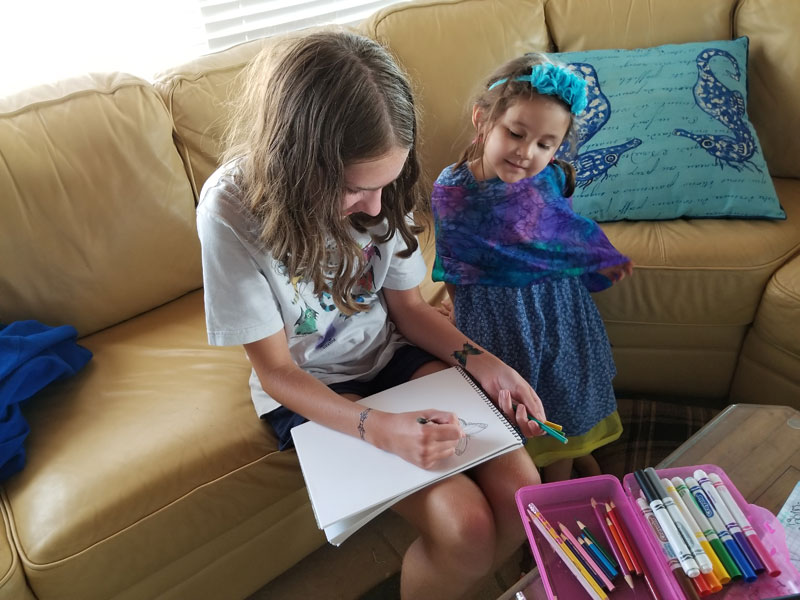 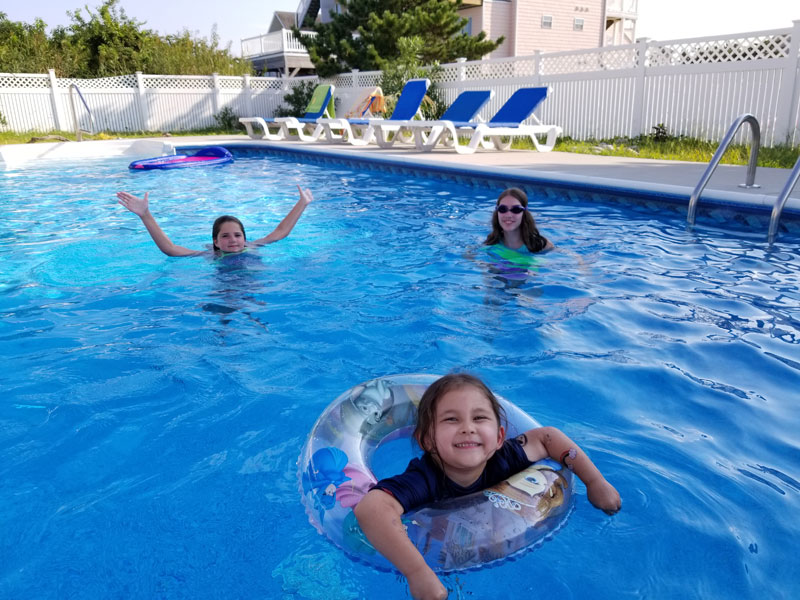 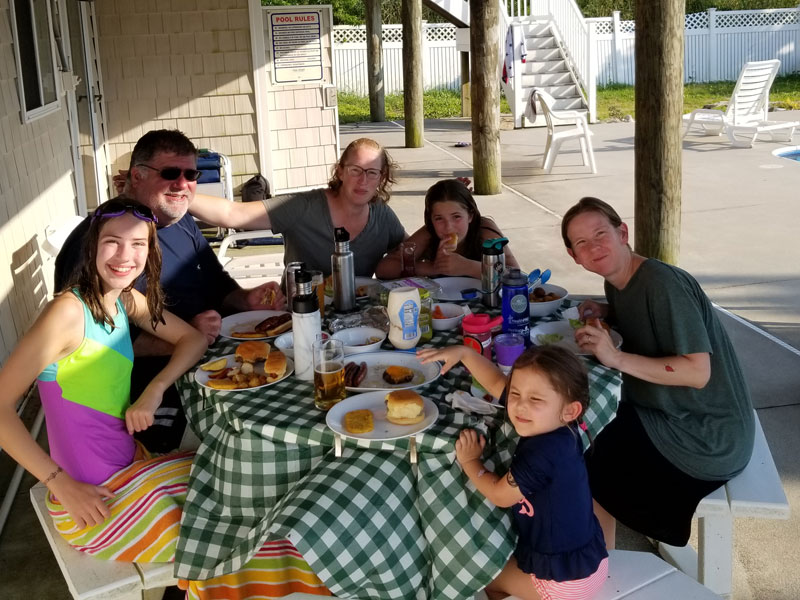 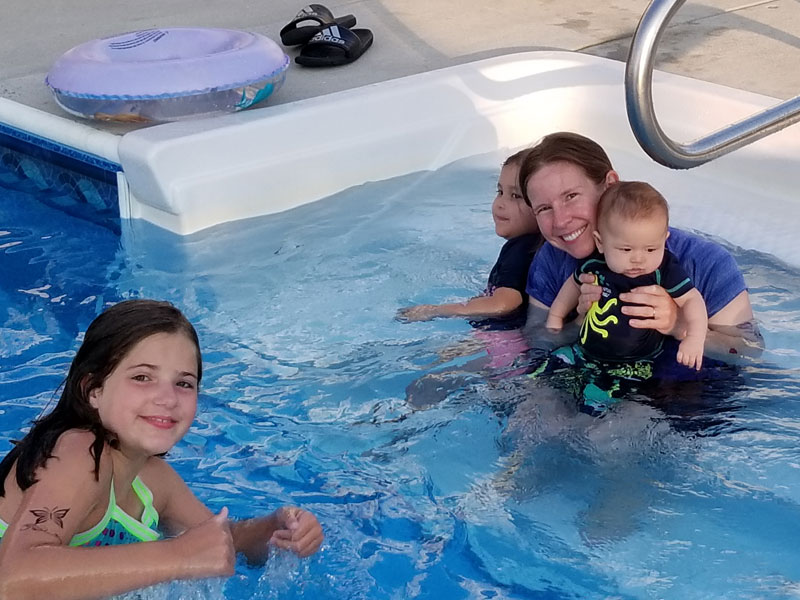 Back from the Beach Day 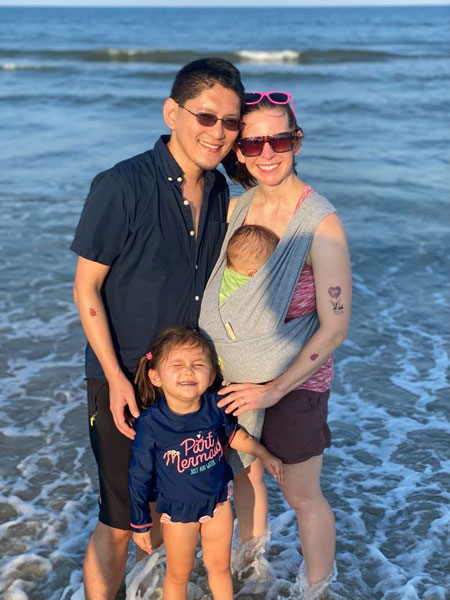 We're back from Sandbridge, and new photos have been added to the Life, 2021 album.

Because of traffic, statewide monsoons, and Ian's nursing needs, the trip down to Sandbridge took 8 hours, nullifying our attempts to have a short trip by going to Sandbridge instead of the Outer Banks. We spent most of the trip on scenic Route 17 on roads with imminent flooding concerns.

We stayed in Hebb Tide, right across the road from the beach access. We enjoyed the charm of Sandbridge compared to Outer Banks even though it's much more expensive. Roads are smaller, pedestrians are everywhere, and there's no through truck traffic in the middle of the night. There are, however, really annoying frogs that croak all night and sound like a crosswalk signal for blind people.

Maia enjoyed both the pool (where she got very good at her kick stroke but still doesn't want her eyes to get wet) and the beach (where she charged at the ocean like Elsa running to Atohollan in Frozen 2). Ian fussed everywhere, regardless, and did not have a favourite locale.

We went to Baja, one of Sandbridge's only two restaurants, midweek for some delicious seafood and ordered pizza on the last night. Otherwise, we had to make our own dinners as the pandemic infrastructure for delivery everywhere has not seemed to reach this area.

The trip back took only 7 hours and also featured Ian crying all of the way home. 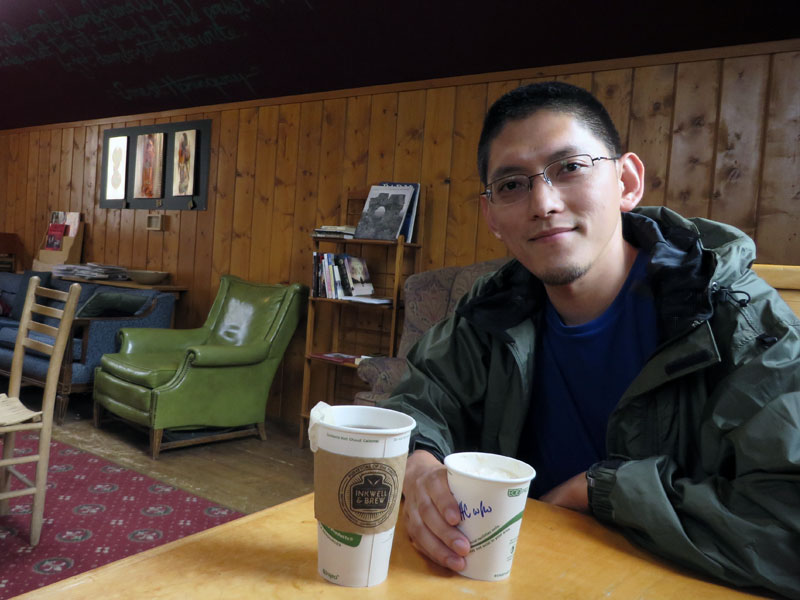 It was a chilly, stormy day in Estes Park, Colorado. Exhausted from a high-altitude 10-mile hike to Glacier Gorge the day before, we were quite happy to loaf around town and sit in this coffee shop (Inkwell and Brew) drinking hot chocolate. The shop had the Colorado hippie vibe down pat, from the mismatched flea market furniture bordered by cluttered corners of ancient magazines to the inspirational messages written on the chalkboard ceiling.

In the afternoon, Rebecca spent an hour in a Dragon Tea Shoppe looking for exotic tea flavors. We then had dinner at Ed's Cantina where we were introduced to the musical genre of electroswing, which led to us playing Parov Stelar, Ruckus Roboticus, and Wax Tailor on our subsequent car trip through the Rockies to Breckenridge.

Some news outlets are reporting on the COVID Delta variant in an irresponsible manner. While it's hard to fit iterative scientific discoveries into one simple Twitter-length sound bite, here are 4 simple facts to keep in mind:

Ten years ago today was the most destructive natural event to ever hit northern Virginia -- a 5.9 earthquake. Thankfully, we all survived. 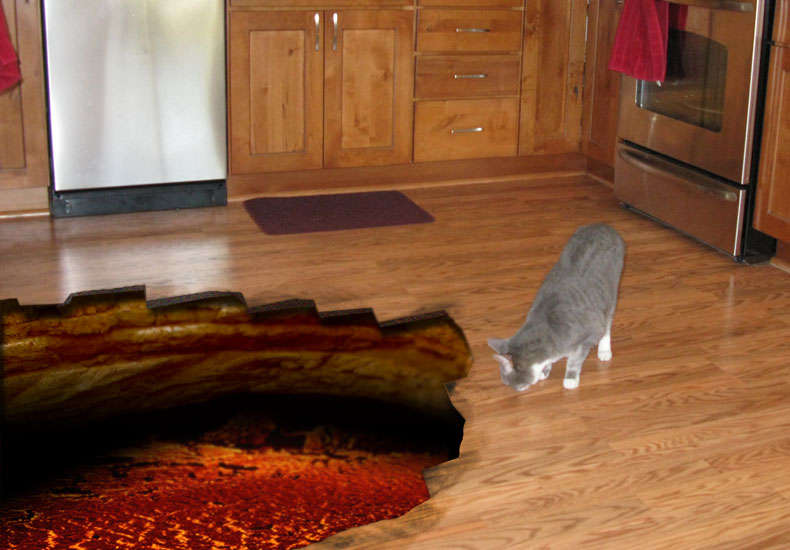 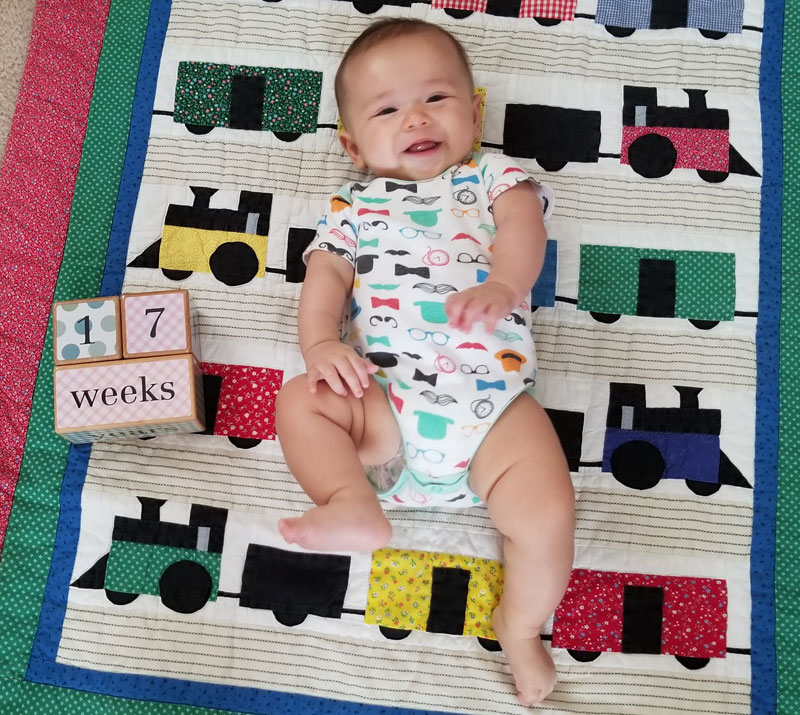 He is quicker to smile than before, but still fusses quite easily. The transition from fussing to losing his cool is almost a vertical slope. At that point, only Rebecca can calm him down.

He likes sucking on our fingers and listening to toys that play classical music too loudly. He hated the vibrations from my trumpet but enjoys the two songs I sing / hum repetitively at bedtime.

Since the beach trip earlier this month, Ian has started mostly sleeping through the night. I put him on for up to an hour in the evening and have him in his crib by 10 PM. He either wakes up around 2 or 3 to eat or makes it to 6 or 7 in the morning. This is already showing promising results in the amount of sleep us parents get. 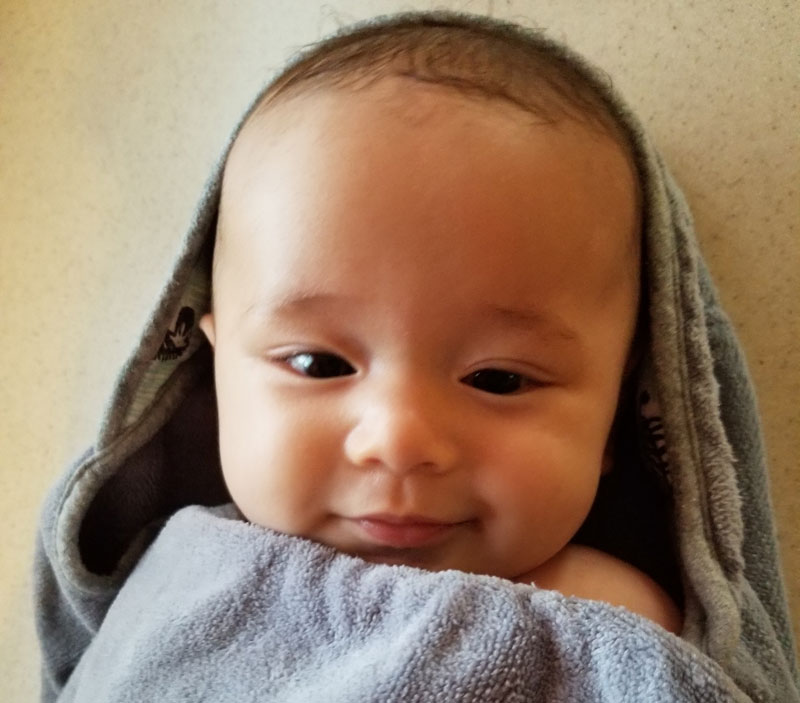 Posts against vaccines and masks often have a tone of defiance or persecution. You can't change my mind!" "This is a slippery slope!" "We're standing up for what's right and If you think differently, you must be our enemy!"

Am I your enemy? I have a few more grey hairs now but I'm the same guy you once trusted, respected, or called a friend 10, 15, or 20 years ago. Maybe I rode bikes with you, went to college with you, played in a band with you, or even attended your wedding. You KNOW me.

So when I interrupt my uncontroversial stream of baby pics and nerd jokes to be serious (exactly 10 times in my 16 years on Facebook[1]), it's not because I'm out to get you. I don't think I'm better than you and I'm not trying to win. I don't want to destroy your freedom or religion. I don't hate you.

I post about COVID-19 prevention and the shifty tactics of social media and search engines because I don't want ANY of my friends or their families to join the 633,000 deaths recorded in the past two years. I don't want ANY kids becoming orphans or growing up with long-term disability when the tools to mitigate this suffering are readily available. And when this pandemic is finally behind us, I don't want to end up with a broken society of two tribes that can't coexist, where a person's worth is summarily dismissed over an opinion.

If you reject what I have to say, at least understand that I'm searching in good faith for the compassionate choices that keep the largest number of people alive and healthy. No one (including me) is any smarter today than a decade ago -- we're just drowning in data. Truths, half-truths, lies, misinformation, disinformation -- it's a tidal wave that overwhelms us and encourages emotional responses over logic. I'm doing my imperfect best to listen to all opinions instead of unfriending, to read opposing news sources that don't just tell me what I want to hear, and to change my mind when new information warrants it. I hope you are too. 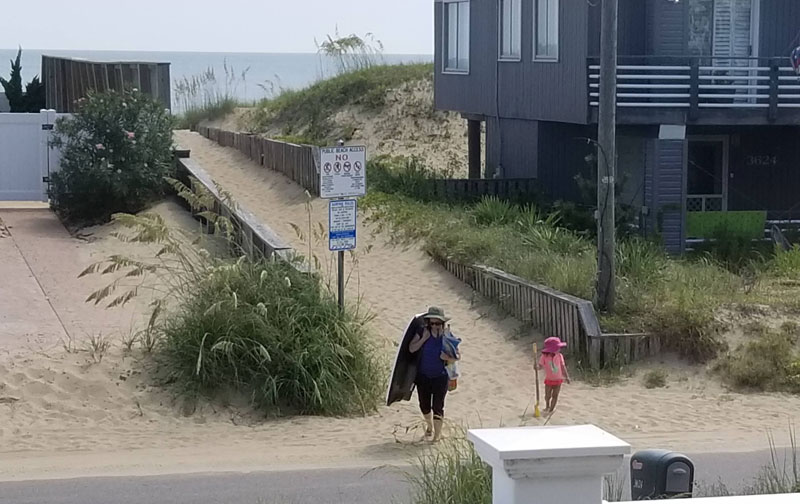 August's Final Grade: B, gradually taming the complexity of having concurrent offspring