Nothing new to report today other than the overabundance of rain clouds in the area. I have no big plans for the weekend other than to do a little housework, mow a little grass, and play a little pool and poker. I'll also try to post some new cat pictures tomorrow.

The proposal, certain to be opposed by motoring groups, follows similar remarks by the mayor of London, Ken Livingstone, who in May month described SUVs as "bad for London -- completely unnecessary" and called their owners "complete idiots." 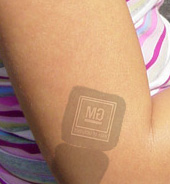 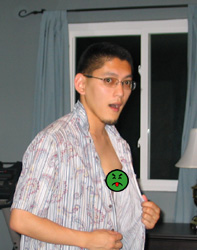 Cops kick the wrong groin in 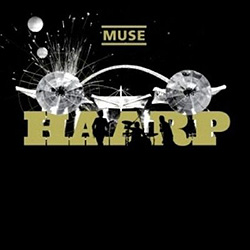 is the latest release from Muse -- a CD/DVD set from a live concert at Wembly Stadium in the UK. I'm usually not a fan of live CDs and I was disappointed with their previous live album, Hullbaloo Soundtrack, which was full of audience noise, rougher less crowd-pleasing B-sides, and an imbalanced mix of vocals under the guitars. This time, however, I was pleasantly surprised.

The CD offers 70 minutes of hits from all four of their major albums (favouring the most recent ones), and the DVD is a well-edited hour-and-a-half extract of the concert in 5.1 surround sound (including everything that's on the CD plus 6 more songs). The whole package can be found for $14 retail or as little as $9 on Amazon Marketplace.

Muse walks the fine line between hard rock and heavy metal, although they've moved towards electronica with their recent work. The trio obviously has a decent musical background, shown off in their improvisational segments, playing tunes in different keys, and their harmonies (probably the only rock band I've ever heard to regularly use a minor-major 7th chord).

The live performance highlights just how well their arrangements and performances hold up and how little they rely on studio clean-up. Songs like Hysteria

(YouTube) are just as driving and tightly-wound in a live performance, and the band members are obviously having a blast performing (the bass player just looks happy to be there). Performance camp is pretty low, as the group has thankfully moved on from their constant headbanging stage. It's also neat to see how famous the group is in the UK, with the entire stadium packed with fans. 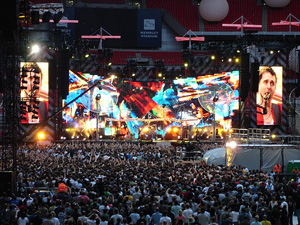 Every song is performed as if it's the most important song you'll ever hear in your lifetime -- the band marches in to the strains of Prokofiev's "Dance of the Knights" from Romeo and Juliet, followed by the motive from "Close Encounters of the Third Kind" before diving right into "Knights of Cydonia"

(YouTube). After several recent hits, the seminal "Butterflies and Hurricanes" makes an appearance

(YouTube). In particular, watch the segment from 2:50 to 4:40, where Matthew Bellamy trades in his guitar to do the Romantic-era piano flourish.

The quiet, more intimate pieces get more air time on the DVD than the CD, although both media include "Unintended" from their first album

Physicists solve the mystery of levitation

Remember when I wore a bunch of hats? This is kind of like that.

Woman pays over a million dollars for a new mattress

Eight game locales you're not supposed to see

advocating getting knocked down rather than knocked up since 1962

♠ It's proposal season at work, and my advancing years at the company mean that I actually have to get involved this time around, so website updates may occasionally fall back on a clip show over the next couple of weeks. I do feel good about my proposal skills though, since the last effort I was involved in went off without a hitch, or maybe with a hitch. 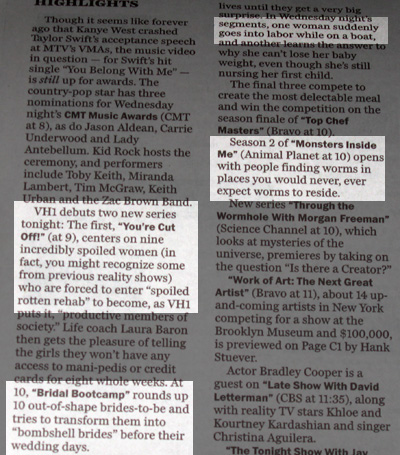 ♠ Government contract proposals would be much more interesting if the competing companies could face off in a Survivor-style challenge, with last company standing receiving the contract. Something like "The Bachelor" might also be interesting, but would probably lead to bad SEC-like publicity.

♠ Speaking of creatively bankrupt reality shows, Wednesday's TV section in the Post listed a show about spoiled wives, followed by bridal weight loss and a woman who gave birth on a boat without knowing she was pregnant. As a bonus, there was also a show about finding worms in places you'd never imagine.

♠ Personally, if there were worms in places I'd never, ever expect worms to reside, I think I would be okay with never, ever discovering that they are there. It's the same blinder mentality that allows me to be okay with that senior guy at the office who never washes his hands after urinal usage -- I don't really need to know what he's touching after he leaves as long as I remember never to greet him with a handshake.

♠ I am generally a handshake greeter by default, but have found that being married requires you to convert into a social hugger. Apparently, it isn't seemly for a single guy to hug other people's wives, but it's quite alright to lay the foundations for a swingers' club and hug all the women once you're married.

♠ Plans for this 12 of 12 weekend include the wedding of one of Rebecca's cousins in Alexandria, a hike up Old Rag, and a mortar mix of overtime work cementing everything together. There may also be a Caption Contest coming up next week to whet the wit of my readers who've been left with half-assed entries for much of the past two weeks (and this trend is not likely to lessen while I'm in on-the-job training next week).

Restaurant tells eaters to eat up or else

Ask me some questions. Whether it's trivia, recommendations, hypotheticals, or higher education, I'll pick the best ones and answer them on Friday. This will enable you to get one step closer to changing the passwords on my accounts and stealing my identity for evil.

If you can't think of any questions, then just take your favorite quote and put a question mark at the end of it.

Twenty-one years ago today, on June 11, 1993, I had the Court of Honor for my Eagle Scout award. As the movie below shows (starring Assistant Scoutmaster Keith Vanderbrink and myself), I had some trouble getting through the Eagle Pledge, so I may not actually be an Eagle Scout today.

I had no good reason for screwing up, other than the fact that I was overwhelmed by the absurdity of all of the pomp, speeches, and visiting dignitaries, and was not taking it nearly serious enough. 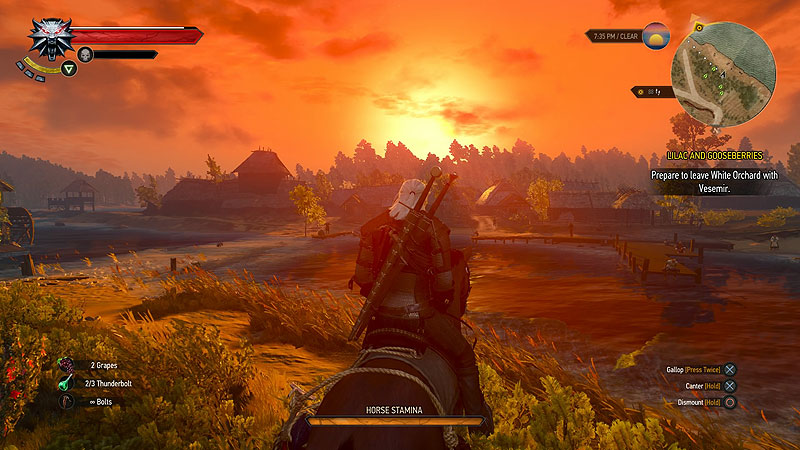 My previous experience with the Witcher series was inauspicious -- I bought Witcher 2 for cheap in a Steam Sale and got stuck about 20 minutes in on a bugged tutorial mission. I'm currently 11 hours into The Witcher 3, which is evidently the most impressive thing to ever come out of Poland (with 4 million copies sold in 2 weeks).

This is a heavily story-based role-playing game with real-time combat, skill trees, inventory, and the whole nine yards. The game is graphically impressive, even on my five year old computer and Gefore GTX 660 which can only go up to Medium detail without stuttering. Comparisons to Skyrim aren't very appropriate -- where Skyrim features a relatively shallow framework where you can do anything and invent your own fun, this game focuses heavily on story and the choices you make, with even the most throwaway sidequest having depth and a few plot twists here and there.

There's a fair bit of control complexity that requires some upfront online study (why don't people make game manuals anymore?) but combat is still possible if you opt to button-mash -- when in doubt, parry. The controls betray the game's cross-console roots (especially the stupid radial menus that every game has these days), but the PC key bindings are sufficiently responsive besides the usual problems with precise positioning of your character when you want to turn slightly but end up drunkenly moving two feet to the left.

So far, I'm having a lot of fun. The initial area is the right size for learning how to play without being too on-rails, and opens up dramatically a couple hours in. The game is incredibly polished with unmatched attention to detail, and has already had 4 patches full of bug fixes, addressed player concerns, and free DLC -- the development team has a reputation for really taking care of its players, and it shows.

The URI! Zone has been running IN THE CLOUD for just over three years now, so I thought I would compute the costs to see if I'm really getting my money's worth. The answer isn't completely cut and dried, as I do a lot more with the flexibility offered by the cloud, spinning up new servers on the fly to work on Sparkour or taking over hosting duties for the Paravia Wiki. Still, I'm very satisfied with what I've gotten for the amount I've paid.

In the olden days, I was spending $240 a year on the "complete" hosting package for the URI! Zone. I could login to my space on the shared server and upload files but not much else. When I moved into AWS, I added a 3rd server (Web/App/DB instead of just App/DB), and also an SSL Certificate so I would appear more trustworthy when telepathically stealing your credit card information.

The data for year #1 in the cloud is a little skewed since I took advantage of the introductory year's worth of free services through AWS. At the end of that year, I also purchased reserved instances on multi-year contracts for a lower price. It wasn't until year #2 and #3 that I could actually look at comparable costs. Through the advanced mathematical process of hand-waving and bad estimation, I would say that my cost per server has gone down in the cloud from $114 per server to about $93 per server. My productivity and ease of deployment has gone way up and I've only suffered a single outage (5 hours in 2015) in the whole time.

Bottom Line: Moving to the cloud took a good deal of upfront effort to do intelligently, but the pay-offs in cost reduction, productivity, and flexibility have more than outweighed this. I am very happy with AWS as a cloud environment, even though I don't need or use a majority of the services offered.

For comparison with Maia's house picture from Wednesday's post (drawn at 3 years 11 months), here is one I drew on my mom's birthday when I was 3 years 7 months old. 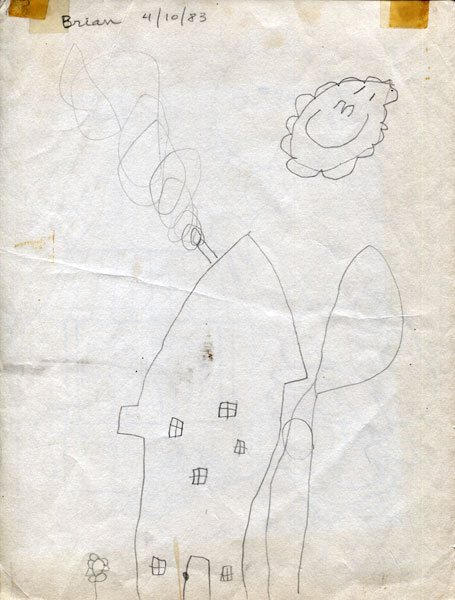