...and by the time I'd taken out the garbage and mailed a couple of letters, it was four-ten, time to go back to the job search. I paused. Four-ten was almost four-fifteen, which was just a quarter hour before four-thirty. Most people are winding down their day by then -- some even knock off half an hour early, especially those important enough to be responsible for hiring new guys. In other words, not only would I be wasting my time in applying for anything now, but I'd actually be hurting my chances by pestering people so late. -- Losing Joe's Place, Gordon Korman 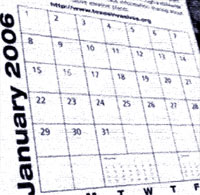 Sometimes the day before a holiday is even better than the holiday itself. In the work world, everyone is highly aware that the holiday is approaching, and become loathe to start any new projects or pursue any significant work that might stretch longer than the allotted hours left before freedom. Half the work force doesn't come in at all, leaving those that do a quiet, relaxing environment in which to tie up loose ends and do their Amazon-based Christmas shopping.

Back in college, the day before a holiday was essentially a holiday itself. No one attended a single class unless you had one of those misanthropic teachers who liked to schedule tests that day just to be ornery. In my academic career, a holiday that started on a weekend generally meant I also took off the Friday before, and probably left campus to drive home on the Thursday. This was aided by the fact that I scheduled as many classes as possible for Monday, Wednesday, and Friday, since 50 minute classes were 9000% more acceptable to me than classes lasting the extravagant hour and fifteen on Tuesdays and Thursdays. Since most of my Thursdays consisted of a single sight-singing or ear-training lab in the morning, I'd be on I-81 making tracks back to Northern Virginia by noon. I'm sure my Friday professors didn't mind a bit. This was balanced out by the fact that I always came back as soon as the dorms opened, generally two or three days before classes opened. In those quiet days before the hubbub returned, I'd geek out practicing trumpet, playing games in the dorm, and eating out at McDonald's twice a day since all the dining halls were closed.

When the holiday itself arrives, it's usually underwhelming. You're supposed to be off of work or school, so the excitement of being counterproductive just isn't there any longer. Especially now that I work on holidays, I prefer the lead-up over the holiday itself.

Happy Day-Before-Thanksgiving. I hope you are all thankful that I updated my page today!

Nuclear fusion in your own home