Two new video game systems hit the market this past weekend. In one corner, we have the Playstation 3 which retails at $500 (with games for $60) and doubles as a multimedia center, internet browser, and sometimes brushes your teeth if you type in the secret code. In the other corner, the Nintendo Wii, sporting a $250 price tag, a goofy name, and a crazy new controller that you wave around in the air. (Side Note: I bet Philip Barbie currently owns both of these, and has not slept all weekend). 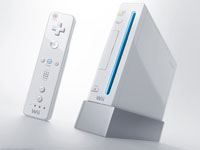 The demand for the PS3 was so high that resellers found a ready market on eBay, selling them for one and two thousand dollars in the hours after release. I'm betting that at least half of the people who camped out in front of stores, and endured riots and muggings (one camper was shot in the chest) simply resold their machines to make a quick buck. I've never understood this culture of "Launch Day", where otherwise sane (if stupid) individuals line up at a store for the slim chance of getting one of the two systems on launch day that haven't already been bribed off by the store's workers. They're essentially devoting three or four days of their life to being the first on the block to own a console that will ship with two games (at least one of which will be a remake of a game for an older system). This isn't worth my time on a good day, and even less so for these particular consoles.

For the price of a PS3 and two games, I could also just play World of Warcraft for three and a half years, see 69 movies in a theatre (I said 69, Doobie), or pay for 142 Friday afternoon Popeyes runs. Instead, I get an all-in-one piece of garbage that's crammed full of useless functionality. Why would I want to surf the Internet from my living room when I have a computer? Why would I play my CDs in the PS3 when I already have an expensive sound system? It won't take long for at least one of the PS3's functions to become obsolete, after which you'll end up buying a standalone component anyhow. All I want my game console to do is play games. 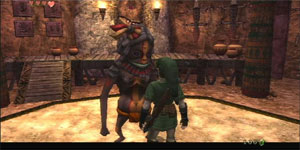 The Wii has the right mindset -- going with bare bones technology and focusing on fun games, but it has a different problem. Nintendo likes to invent weird controllers and then spend two years writing games specifically to prove that the controller is a good idea (see also, the Gameboy DS' stylus which is topical in maybe four games total). Instead of games written to be fun games, we'll get games that require you to wave the wand around like an epileptic arthritic -- initial reviews of the new Zelda have already said that the "shooting the bow, swinging your sword" motions feel tacked on and imprecise. The only way the wand would be humorous is if they themed the design like a cat and it made cartoony shaking-cat sounds as you shook it.

The only reason I'd get either one of these consoles immediately is for the new Zelda game, and that reason is rendered obsolete by the fact that the game will ship for the classic GameCube in December. Sure, there'll be a Wii in my pants someday when it's in the Walmart bargain bin for $100, but until then, I'll keep on playing the old favorites.

Mice: The official taste tester of the 2008 Olympics

Super lions marooned on an island

Brazilians in a fuss over puppies born to cat