how Kenyans learn English since 2004

♣ Pussycat by Wyclef Jean is a pretty catchy tune

(400KB MP3). Usually I find his songs ranging the gamut from Annoying to Unnecessary, but this one's got a neat sound and uses resampling to good effect.

♣ The two pussycat interlopers are invading the house again, sleeping in other peoples' beds and eating their porridge. They're here for the weekend because Kathy's off at the glamorous Society of Music Theory conference in scenic Los Angeles, which is probably a rip-roaring good time for music theorists, but akin to watching a pothead try to move a cigarette butt across the coffee table using only the powers of his mind at 3 AM for the rest of us.

♣ I would never have survived in the academic world, because to me, publishing papers and attending conferences just isn't intriguing in the least bit. Even the thought of flying somewhere for a computer skills training conference or spending eight hours in a single day at the Java convention in Reston makes me want to crawl into myself and hide until I'm no more than a building block for nanotechnology. Why would I want to go and hear about "Intuitive Syllable Deployment and the Case of Brussels 5557 and Its Concordant Sources"? Just enjoy the music! 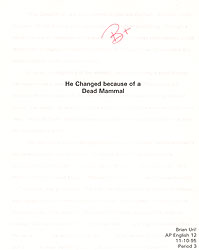 ♣ If any of those appear on the cover of the last Harry Potter book, I plan to sue as quickly as possible and then retire to a secluded tropical island with high-speed Internet where I will pay the yard boy, Julio, to do my web updates for me. Rumour has it that J.K. Rowling will finish writing the story by the end of this year, so we'll know very shortly if she filches one of my stellar titles.

so the book itself should be out towards the end of next year since the book publishing industry moves like an amputee glacier (unless it involves some sort of Dummies manual). Last week I finished my sort-of-annual reading of her War of Light and Shadows series, covering about 4000 hardback pages in just under five weeks. Her books are an army of polygons hiding behind rocks -- I'm always uncovering new angles. Next year's book will be the concluding section of the middle story arc, which has been up in the air since 1997, and I'm looking forward to seeing how it turns out.

♣ Now that the pleasure reading is off the list, I'm currently buried in several work-related tech books, since we're ramping up to another three month crunch period soon. None of them have any dragons yet. However, I remain optimistic.

♣ This weekend, I'll be reading more about the Spring WebFlow framework, pressure-washing the back porch for painting, and writing up my lesson plans for the classes I'm teaching in two weeks time. I'll be talking about best practices and design patterns in software engineering on one day, and Java in web development on the second day. If I could just think up two or three more topics, I could host my own conference and make millions in registration fees, then retire to a secluded tropical island with high-speed Internet where I will pay the yard boy, Julio, to do my web updates for me.

♣ I would pay him enough that he would refrain from using cut-and-paste to fill up space. That is such an amateur device.

Woman dies next to her own grave