How I Spent My Thanksgiving Vacation 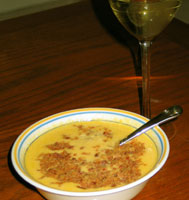 Described by EAT Magazine as an "effervescent nectar of the gods", Cheddar Cheese Soup made a successful comeback at dinner on Sunday night. I experimented by using one half less of an onion which made the soup more runny, and less filling, which was a good thing since you could eat more without getting full. This was an intentional experiment and in no way related to the fact that half of the onion fell in the trash can during chopping hour.

People came and people ate. This week's main course was a ten pound spiral-sliced ham. There are now enough leftovers in my fridge to feed a small army of attack-trained gerbils, which will come in handy on the day I want to kill one of my neighbours very very slowly. You can see the entire racial spectrum at this multicultural dinner. From left to right: a whitey, an Italian, an Italian with a tan, an American pretending to be a Spaniard hiding in the back, an Asian, a Puerto Rican, and another whitey. Not pictured: the black guy who couldn't make it this weekend. 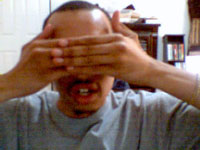 The next day I showed my houseguest the beauty of living in a yuppy mecca in the wilderness of Loudoun County, where you can buy horse gear at the local Petsmart and be no more than five miles from any major chain. We poked around a few of the cloesr malls to see what the Wii situation was like, and of course it was sold out everywhere (and had been since stores opened the day before). Playstation 3 seemed to be the more desired console, since stores actually posted signs out front advertising their lack of inventory. 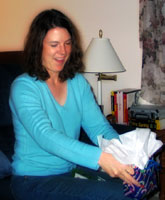 We then consumed lots of leftovers, watched a whirlwind of TV shows on DVD that might not air in Spain, saw the movie The Departed which was good but fell apart a bit towards the end, and ate chicken fingers at Ruby Tuesday. After dinner, she wrapped a bunch of Christmas presents the fake-out way (bags with tissue paper on top) and we played some games.

Today, I'm cleaning up the house from all the crazy kegstands of Thanksgiving Dinner and will probably do some work this evening.