♣ Whenever there's a holiday on which people don't have to be at work, the number of visitors reaches that of a live performance of Popo Zao. This is why I usually don't update on holidays.

♣ There was a time when I posted every day of the year, but my writing is like a precious natural resource which must now be conserved so it will never run out. If I am the natural gas of the blog world, then we should all hold that gas in for as long as possible and hope that Peak URI! never comes.

♣ Now that the election is over, I expect oil prices to rise immediately. Had they stayed up before the election, it would have been an issue, and if they go up now, voters will blame the Democrats. I do believe I've cracked this puzzle called politics. 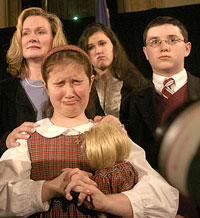 ♣ I almost had a caption contest for this photo of Rick Santorum's family at his concession speech, but then decided that it would be too easy.

♣ During LOST last night, ABC interrupted the feed twice to let viewers know that Associated Press had decided to call the Virginia Governor race for the Democrats. I'm watching LOST for entertainment and escape -- why do I care that a news organization knows that another news organization has made a guess about the outcome of a race that's still open? They might as well interrupt every show to remind us that it might rain tomorrow.

♣ LOST has been pretty good these past couple weeks, although Wednesday night's cliffhanger was a stupid way to close for the holidays. Also, the actor who played Captain Mal Reynolds on Firefly was too typecast in my brain for me to see him as a character on LOST.

♣ I have mixed feelings about the LOST strategy of showing 6 episodes, breaking for 3 months, then showing 16 more. I like the lack of reruns, but I think 6 was too short to really get us into the season. It would have been better if they just showed every episode back to back starting in January, or made a more even split of 11 and 11. In fact, TV would probably be better overall if there were two smaller seasons every year rather than one season with tons of dead time. I'm getting too old to wade through extended TV seasons. 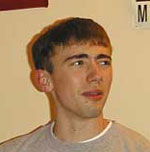 ♣ Speaking of old, tomorrow is Kelley Corbett's 27th Birthday. Prety soon he'll be fat, bald, and double-chinned, wandering around the kitchen making dinner for his executive-powered wife, having sold his trumpet for a loaf of bread and some paprika. Happy Birthday!

♣ Tonight I have dinner plans as reparations for taking care of Kathy & Chris' hooligananimous kitties, and tomorrow I'll be shopping and preparing for the first of several Thanksgiving dinners on Sunday night. November, as older readers will recall, is the Month of Holiday Dinners month, where I try make as much food as possible and eat leftovers all week long afterwards.

Deer gets head stuck in pumpkin

80% of Deer prefer Target to Walmart