Early in the game, a four-of-a-kind appeared on the table. This was followed by a straight flush -- Seven of Hearts through Jack of Hearts (and someone else also had the Six of Hearts). This is the sort of magic that happens when I move poker upstairs into the kitchen for the winter months when the basement is chilly. Hearts was pretty much the only suit to appear on the board after that.

After three people were out (myself, Rebecca, and Anna), the consolation prize of mini eclairs came out, because if you've just lost $10, the best remedy is to eat yourself into oblivion. While opening the tin, Rebecca remarked that it "felt very light", and then noticed that it did not contain any eclairs.

In the ensuing chaos, during which Anna believed that Rebecca had sliced her finger open on the box and/or been stung by a killer bee, I took a knee and proposed. (This is probably the only socially acceptable way to give someone a box of delicious eclairs and not face disappointment that the eclairs aren't anywhere to be found!)

Despite the excitement of the newly-engaged, the game continued eventually ending in a win for Ben. The REAL eclairs also came out, cleverly disguised in a plain old tupperware. In one of the final hands, the Four of Hearts from my well-played deck of cards became cracked and marked, rendering the deck useless. I also took credit for this, saying that it was a sign that October 4th was a good day for proposals.

I could kick David Copperfield's ass at magic. 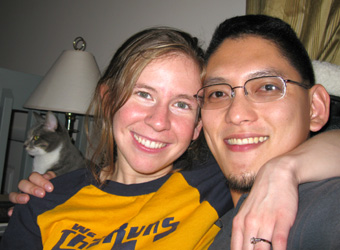 Girl who bleeds without being cut