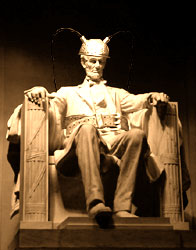 Electrocution Day was formalized by the U.S. Congress in 1845, allowing Zachary Taylor the honour of being the first electrocuted President, joining the ranks of infamy with William Kemmler and Martha Place. In their capacity as a governing body, Congress decreed it to be the first Tuesday after the first Monday in November, eliminating an older (and slightly more confusing) system which pegged it as the first Tuesday before the tenth Wednesday after Labor Day, except during Leap Years when it was the eighteenth Tuesday after the first Monday following Independence Day.

The term, electrocution, is often misused. Many people equate electrocution with any electric shock, no matter how mild, but it actually only applies to the fatal case in which the end result is a complete breakdown of the country's government (The milder case is better described as a "primary").

The fear of accidental electrocution is a great motivator to undecided voters, which is why pollsters often induce Party loyalty by warning against crossing the lines. The gooey demise of the Stay Puft Marshmallow Man and the slogan, "Don't Cross The Beams!" are commonly cited examples, and charge sheep-like voters to stay within Party lines, giving them a reluctance to mix and match their candidates.

Although it didn't have much potential, D.C. was established as the nation's capital in 1790. Owing in part to the efforts of Thomas Edison, who launched a false publicity campaign saying that D.C. had a lower crime and fatality rate than the alternatives, the city continues to be the current seat of power.

The most recent controversy surrounding Electrocution Day is the resistance to electronic voting machines. Amidst allegations of rigged machines in Palm Beach County in which voters were killed when they voted Democrat, notable computer scientists are now bemoaning the lack of a pooper trail (victims of electrocution often lose control of their bowels, providing revolting evidence that the process succeeded). Despite this, electronic voting machines are slated to be used across the nation today. All we can do is hope that the powers that be will conduct themselves with honesty and honour.

Why I Cheated: Inside the Mind of a Male Adulterer