There are no plot spoilers in this review, but I do mention a few plot devices and places that explode. 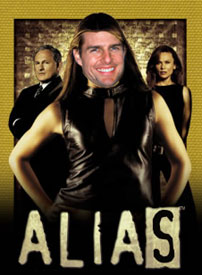 This summer blockbuster finally came out on video last week, starring post-Scientology Tom Cruise as Ethan Hunt, the mild-mannered Department of Transportation employee who's really a secret agent and a member of the Impossible Mission Force. The movie was directed by J.J. Abrams, written by his two favourite Alias writers (Kurtzman & Orci), cast by the Ailias casting director, edited by two Alias film editors, with the Alias production designer doing whatever those do, and with music by the Alias guy (Michael Giacchino). Greg Gunberg (a.k.a. Agent Weiss, a.k.a. JJ's kindergarten friend) even gets a cameo where he asks Ethan what he does for a living

The similarities don't end behind the camera -- the Alias style is in full play here. Bombs get injected into people's brains, people break into the Vatican and meet their handlers in the Slurpee aisle, and there's even a Marshall character who can only be differentiated by the fact that he speaks his Marshall-nonsense with a British accent. Everything about this movie screams "Alias made with more money than God". 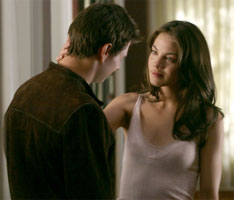 None of this makes it a bad movie, because everyone involved in Alias made it such a polished, stylish affair that their work on the big screen just seems like a natural extension of what they were doing before. The movie starts with a cliffhanger, followed by a "72 hours earlier..." segue that was innovative in 2001 but overused by the time Sydney Bristow found out she had a sister. From there, it keeps pressing forward at a manic pace. The gadgets are cool, everything explodes eventually, and the plot holes are large enough to make you not worry too much about the plot, but small enough to maintain your suspension of disbelief. Despite my sense of déja vu, I was highly entertained throughout, and the movie doesn't fall into the 2006 trap of lasting fourteen hours too long. Plus, Michelle Monaghan is a cute supporting actress even though she doesn't really get to do much besides be the eye candy.

Final Opinion: Treat this like a brain-dead two hour Alias special and enjoy it while it lasts. Worth watching, if only to see the Chesapeake Bay Bridge explode.

We're not at war. War ended a long time ago.