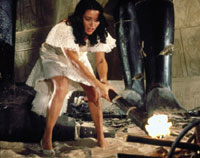 Raiders of the Lost Ark falls squarely into the camp of "late-70s movies that are now too annoying to watch". This subset of movies is often characterized by trying to be more epic than they really are, midday showings on TBS or AMC, handguns that sound like cannons, bad grainy Technicolor with earth tones, or random appearances of a young Robert Redford. A few years and sensibilities later, it would have squeaked into the "goofy 80s movie that's loveable because it's so 80s", but it's held back by the teeming masses of random foreign plotless extras, a heroine that can't act, and strings of scenes that don't really make much sense when put together. The most saliently annoying feature though is the John Williams soundtrack.

The soundtrack in this movie (and its sequel) are the cinematic equivalent of the loud office worker that plants himself in your office and won't let you get anything done. It's always on, always yapping, and has a palette notable for its complete avoidance of silence. It seems like Dr. Jones can't do a thing without this Greek chorus of three motives and a brass fanfare chiming in the background. The way that Marion's Theme injects itself into every single scene she's in is subtle like Pop Rocks, and tells the audience, "LISTEN THIS IS MARIONS THEME LEARN2MOTIVE". Couldn't he think up a nice little variation the second time through? Add an eighth note here and there? Even playing the damn thing upside down would have been a refreshing change of pace.

One might argue that film composers are already frazzled by having to write so much music in a short period that the reuse is inevitable. The solution? Not every single minute of the movie requires notes under it! Silence is music too, and having scenes where the visuals and dialogue can live on their own strengths are crucial. The first time a student composer writes a sonata for [insert random instrument he plays] and piano, the piano part usually goes from start to finish without any breaks. For a sonata to truly be balanced and aesthetically pleasing though, the two parts need to have a dialogue with each other, bouncing back and forth, sometimes intertwining and other times accompanying. The soundtrack to Raiders of the Lost Ark could aptly be titled, Sonata for John Williams and John Williams.

The other annoying aspect of the soundtrack is his annotation of tiny actions with orchestral gestures -- someone tossing a pebble in the air shouldn't require the piccolo player to play a little flutter every single time, and the fat guy doesn't always need to walk with tuba footprints. Once is cute, twice is expected, and more than that is like giving subtitles to the subtitles.

Are you tone deaf?

What kind of CIA agent are you?