I've done this for four years so you should know the drill by now. Movies that I've seen are bulleted in the list and I take no responsibility if you lose all your money betting on my completely unscientific choices! Follow the links above to see selections from previous years. 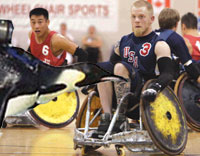 Darwin's Nightmare
Enron: The Smartest Guys in the Room
March of the Penguins
Murderball
Street Fight

What will happen?
If you were to put all of these movies in a room together like some kind of real life Ultimate Showdown, the penguins would quickly defeat Darwin's Nightmare, a movie about globalization and fish (penguins eat fish, you see). The Enron guys would break even with the equally seedy politicians in Street Fight, leaving the quadriplegic rugby players the perfect opportunity to kick both of their asses. In a final fight, the quadriplegics would get the upper hand over the penguins until the lovable anthropormorphic birds produce their secret weapon, narrator and four-time Oscar nominee, Morgan Freeman. Game over, March of the Penguins wins.

The Nominees:
The Death of Kevin Carter: Casualty of the Bang Bang Club
God Sleeps in Rwanda
The Mushroom Club
A Note of Triumph: The Golden Age of Norman Corwin

What will happen?
Generally, Golden Ages don't have much conflict, and a movie about a happy period in the life of some writer who probably was not as fun to read as Gordon Korman just doesn't seem like it'd be worth watching. Rwanda is so 2005 and Mushroom Club is either a movie about the Super Mario Fan Club or the story of four Italian-immigrant women and their American-born daughters (neither of which seems particularly interesting), so I'm going to go with Death of Kevin Carter. Plus, if I were to go to a club, I would definitely want to go to the Bang Bang Club over the Mushroom Club.

What will happen?
As usual, Don't Tell, Paradise Now, and Sophie Scholl are immediately disqualified because they don't look foreign in the least bit. If you're going to put your film in this category, the least you can do is toss in a couple accent-egu's or weird words in the title. My vote goes to Tsotsi because it reminds me of the Ogden Nash poem about the Tsetse Fly and has playing card merchandising possibilities. Tsotsis -- collect them all! 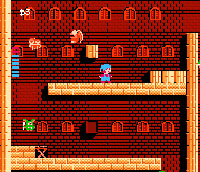 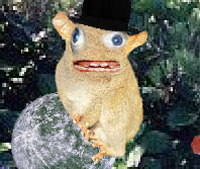 Badgered
The Moon and the Son: An Imagined Conversation
The Mysterious Geographic Explorations of Jasper Morello
9
One Man Band

What will happen?
Unless the Son is a strange paperboard cutout of a monster that loves the moon, Moon and the Son will not win. The studios will also sabotage the chances of 9 and One Man Band because they start with numbers, and would introduce all sorts of alphabetizing confusion at Blockbuster if they won. Are you supposed to go to the segregated number section between the TV Shows and "A" or are you supposed to spell the number and go to that letter? The Mysterious Geographic Explorations of Jasper Morello cannot decide whether it wants to be a childrens' book or a Discovery Channel special, so Badgered will take the Oscar home. The IMBD synopsis says, "The tale of a badger who just wants the world to let him sleep." How can that NOT win?

The Nominees:
Ausreisser (The Runaway)
Cashback
The Last Farm
Our Time Is Up
Six Shooter

What will happen?
I'm going to assign plot summaries to each of these movies, and then pick my favourite based on which seems the most promising:
Ausreisser (The Runaway): Rotund German boy, picked on by all his schoolmates, decides to run away to Norway where he eats whale blubber and saves a Nordic beauty from certain death. Subtitled.
Cashback: Double-crossed thief, Porter (Mel Gibson), attempts to extract $70,000 from a recalcitrant ATM which has a $500 a day limit.
The Last Farm: The tale of the Korean pro-gamer (Jonathan Ke Quan) who won a Starcraft tourney by building supply depots in hidden corners of the map until his opponent died from playing video games for more than 48 hours straight.
Our Time Is Up: The rise and fall of a publically traded tech company, "Our Time", who had the bright idea of putting a clock on the Windows taskbar.
Six Shooter: Biopic of a crazy, mathematical genius (Gwenyth Paltrow) who tries to assassinate six world leaders by kidnapping them and reading proofs until they die of boredom, while an over-the-hill Secret Service agent (Clint Eastwood) is hot on her tail.

Why I'm not a quantum physicist

So where the bloody hell are you?