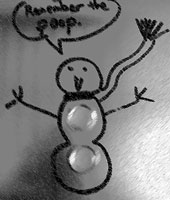 1) Pop-up Menus:
The latest DHTML fad is to have little submenus pop up next to the mouse whenever you hover the cursor over a menu item. It's used in the main navigation bar at the Washington Post

and the "view other collections" menu of 1-800-Flowers

. All too often though, the popup menus cover up something else (or even the other menu options). Alternately, you'll be happily browsing through the submenu when it vanishes, turning your browsing experience into a timed game of Whack-a-Mole.

2) Internet Lawyers:
These are the fresh-faced college kids who want to look smart on the Internet. If they disagree with a forum post or someone's comments, they'll quote the unfortunate body of text line by line, and then provide seemingly intelligent counter-arguments for each point. They'll end with a passive-aggressive conclusion which implies that since they addressed every point, they're obviously right. Hey, we all did this in 1997. Then we realized that arguing on the Internet is a waste of time and now reply with some variant of "ORLY?" or "urgay" or (for the Japanese) "...", and you should too. I guess this is just one of those things kids have to learn on their own.

3) Hyperlink Abuse:
I hate when you see a news story where every other word is a link to somewhere else, or in the case of Slashdot

, huge tracts of web real estate are links. People love to link, and would probably link every single word to its dictionary definition if they had time. My attention span is short enough without having to deal with the distractions of hyperlinks when I'm trying to read to the end.

4) Mandatory News Registrations:
Your news site isn't the only oasis of news in a desert of Flash games and gambling sites. If I have to register to read your story and BugMeNot

doesn't have an entry for you, I'm just going to find the same story somewhere else. I own a billion dollar house and am young enough to enjoy beer commercials -- you should be begging me to generate ad revenue for you.

5) Spoilers:
You're always going to stumble across unmarked spoilers on the Internet because people are mean-spirited and want to give away the endings of things. What's worse than unmarked spoilers are spoilers by people are too stupid to realize they're giving something away. For example, someone died on Alias this season and forums were abuzz with people wondering if it was permanent. The next month, someone posted a news item with the title, "[Actor's Name] signs on for three episodes!", followed by a hidden article under the heading SPOILERS!!!. Even if you don't read the article, you're pretty much spoiled by the title, you Internet moron. By the way, in Sixth Sense, Bruce Willis was bald.

Today's pictures have absolutely nothing to do with the text.

Grandmother of twenty has a kid at 62

The owner also requested that the officer bring a bag a grain, so as to play-act a brain teaser. Got any wheat?