Snowstorms are inherently positive surprises when travel is not involved. Besides the obvious perks, such as snow being pleasant to look at from indoors and fun to build forts in outside, and the snow-related foodstuffs like hot chocolate and yellow snow, you are finally allowed to use the excuse of "being snowbound" to become a worthless, unproductive member of society without any pangs of guilt while your neighbourhood is festooned with icicles. 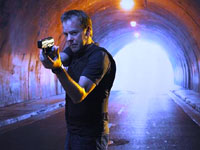 Anna and I started watching the second season of 24 back in May of last year when she worked as an indentured servant in my house, and after doing that whole "getting married and moving in with some other guy" routine, our regular viewing dropped off to nothing. With eight inches of snow falling from the sky and all the other people I knew out of town or studying for physics exams, we decided to seize the day and finish off the end of season two over the weekend. This translates into the last six episodes of the season, or 252 minutes of productivity.

24 is a highly entertaining show, though it does have some flaws. On the good side, the main actors are riveting, and not just when they're disguised as welders. Anytime Jack Bauer (Keifer Sutherland) or David Palmer (Dennis Haysbert) are on the screen, you just can't look away. Strong acting is tied to well-written characters and this gives the main storyline the momentum it needs to keep you watching. These two characters, and occasional supporting characters like the President's wife make 24 worth watching. Now for the bad (there might be minor spoilers from the first two seasons):

Horrible female characters & actresses: Take, for example, Sarah "I have one acting expression where my brow is furled and my mouth is slightly open which I use to represent puzzled, upset, about to get angry, or needlessly slow" Wynter's portrayal of Kate Warner in season two. When you put someone from the Keanu Reeves School of Pretending to Act across from Keifer Sutherland, you get a lopsided lack of chemistry that's laughably bad. However, it doesn't help that almost all the supporting female characters have been poorly written. Generally, if you are a woman on the show, you cry a lot, get kidnapped, get indignant at stupid things, or get into bad situations with zero resourcefulness to get you out, forcing Jack Bauer to come to your aid. Jack's daughter, Kim, is a perfect example of this. In the course of season two, she gets arrested for murder, escapes from custody, wanders into a national forest, gets caught in a bear trap while mountain lions are chasing her, enters the home of a crazy man with a bunker, enters a liquor store alone after closing, and gets taken hostage in a robbery of that liquor store. Towards the end of season two, Kim and Kate are in a car together. Anna and I were rooting for the mountain lion to return to the scene and finish the job, putting both of them out of their misery.

CTU Junior High School: The Counter-Terrorist Unit of LA is apparently the place to be for special agents in puberty. They spend more time stabbing each other in the back, keeping an eye on who's smooching with who, and engaging in subterfuge so the head honcho doesn't suspect anything than they do catching terrorists. It's a wonder they catch anyone at all when every third camera cut in the agency focuses on an agent who spends all her time peeking through the avant-garde wire cubicles to spy on another agent, Michelle, who is now her boss but who used to work for her before she engaged in sexual relations with the guy who is now on the phone with Michelle.

No twenty-four hours is all that exciting: The main storyline of 24 is always well-done and suspenseful, and in episodes where this is the only thing happening, the writing is very strong. In every other episode, the writers couldn't come up with enough plot to fill every minute of the hour, so they introduce needless supporting characters in unfortunate bad plots to fill up screen time (see also, Kim Bauer and the Cougar of Doom). The writers also come up with a lot of plot twists for the sake of plot twists, like characters who just happen to hit their head and get amnesia. The plus and minus side of this is that some of these twists negate earlier plot points, so you can still enjoy the show if you missed the first half of the season (but it makes it very frustrating for viewers who like to put pieces together from the beginning). The show would be great if they called it 12 and then pared the plot down to just the major storyline.

Overall, the show is still addictive and entertaining, and easily worth watching if you enjoy pulp TV. We'll probably end up getting into the third season as well, since it's better than a lot of shows out there, and doesn't require much brain power to enjoy. This show might actually be better on TV than on DVD, because it's harder to notice all the plot holes when you only see it once a week.

Harry was in the line of fire and got peppered pretty good. Then I salted him up and had him for dinner.