The Evolution of Lunch 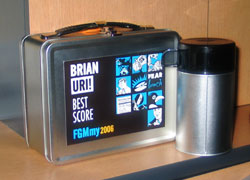 I won an award at work for the series of lunchtime seminars I gave last summer on music. The prize was a silver metallic lunch box with my name on it that I will place on the window ledge overlooking the office building next door in my posh office, where I will use it as a conversation-starter with next year's batch of hot, impressionable computer science interns.

I haven't owned a lunch box since elementary school, and it was probably a Transformer or He-Man lunch box made of metal. The Thermos always smelled of spoilt milk, because we had to have our three glasses of milk per day, and the hinges were always rusted out from the milk that leaked from the Thermos. Since the beverage took up a good 45% of the box space, the remainder was a tenement of a sandwich, a bulk-bought snack such as the cheap-brand of vanilla Oreos, and an apple. The peanut butter and jelly sandwich would always have an apple-shaped depression with a slight purple stain in the center where the jelly had leaked through.

Once I reached junior high, I decided that lunch boxes were uncool and PB&J sandwiches were a complete waste of bread, so I graduated to brown bags containing two bologna and mayo sandwiches on white bread, an apple, and a snack, like Grandma So-and-so's Rich Fudge Brownie -- a compact plot of fudge that was rich enough to instantly double the waist size of anyone without a speedy Asian metabolism. Of course a Thermos had no place in a brown bag, so that was replaced by rectangular juice boxes. Not Juicy Juice, because that is brand name, and brand name is four cents more expensive than Leo's Apple Juice (with 10% real juice). I also never had Capri-Sun but was slightly relieved about this because I could never get the damn straw to poke through the foil without permanently damaging the straw.

In high school we were allowed to go off-campus for lunch, but I took advantage of this maybe twice, so the two-sandwich combo persisted for three more years. Most college lunches were either the prepackaged sandwiches in Dietrick Express, including the Hokie Sub which used to be on the meal plan and easily rivalled a seven dollar sub at Subway (until they realized that they were losing money on them and doubled the price), or late breakfasts at Schultz dining hall where I could get the all-you-can-eat bacon. Bologna and mayo sandwiches made a brief comeback during my internships at FGM until I realized that they weren't quite as good when you didn't have your dad make them all for you and had to do it all yourself. Nowadays, I eat lunch at work around 10:15 AM and it's generally microwaveable Chef Boyardee products, Cup O' Noodles, or leftovers from the night before.

Internet scholars say that I'm daring for discussing the evolution of my lunch in a public forum, but this is one arena that I don't think creationism applies. God had better things to do with his time than create the bologna sandwich.

New LOST Tonight!
When Rousseau leads Sayid to a mysterious captive in the jungle, he becomes determined to find out if he is one of the "Others." Meanwhile, Sawyer discovers Hurley's potentially devastating breach of the survivors' trust and blackmails him into helping track an elusive island creature that won't leave Sawyer alone.

If you shoot the tool who thought he was clever when he came up with the term "gaymers" is it a hate crime?

Next time, don't get the ice