On the way home yesterday, I was stuck behind a slow-moving delivery truck that was clogging an artery of traffic like a bacon-wrapped scallop on wheels. The truck must have been delivering a shipment of highlighters, lemons, and roses, because a sickly, sweet aroma filled my car, instantly evoking a childhood memory of an object long obsolete: the Invisiclues marker!

In the late 80s, good computer games came from either Infocom (for games that required literacy) or Sierra (for "pretty" pictures) -- there just wasn't any other alternative. Much like today's marketing scheme of "buy the razor for a dollar then buy the razor blades for your first-born child", Infocom sold their games for about twenty dollars and then sold a hint book for seven more dollars. The hint book was a cheaply-bound paper product filled with questions about the game. So you wouldn't accidentally read a solution early, all the answers were written in invisible ink, and you had to highlight the page with a special marker to see the hints. Each question had two or three clues underneath it, going from the most vague to specific game instructions. There were also red herring questions which would chastise you for abusing the hint book if you highlighted them.

I had a hint book for every single Infocom game I owned and most of the Sierra ones as well. Realizing how big the "stupid gamer" market was, the companies would put ridiculously obtuse puzzles in the game just to sell hint books and then annoy you by making the hint "You should have picked up the shiny coin on the ground in the first scene of the game! Better restart!". In particular, I remember a giant maze in Zork III that involved pushing sandstone blocks around like Sokoban, which also had a time machine. I'm sure there was an actual sensible solution, but being seven years old at the time allowed me to Invisiclues the exact sequence of moves through the maze and type them in word for word without any guilt. I think you had to drop down into the hole, get a book out of the depression in the floor and then push a block with a ladder next to the hole so you could climb back out.

Invisiclues paper had a shelf-life of about two years before the secret writing faded into a fungal texture of green goo, after which they were only useful for marker-sniffing. After my Zork III manual faded out, I never played that game again until the advent of the Internet, where die-hard fans would type the hint books into web pages word-for-word because they were probably in dead-end summer internships with no real work to bother with.

Bonus geek points go to anyone who remembers which game this is from -- easily one of the most difficult and abstract, yet coherent games ever written: 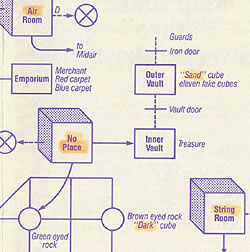 Self-harmers to be given clean blades