So don't hate on me because I didn't call anyone up immediately afterwards, but I got married yesterday -- a spur-of-the-moment decision that culminated in a trip to the Loudoun County Courthouse in Leesburg around 4 PM. Because it was so late in the day, traffic was horrible going up Route 7, but at least it's an event that will make 2/22/06 a memorable 222 day! We didn't get home until late, so I thought it'd be better to just announce it to everybody at once in today's update than to wake up people late at night just to shock them. Of course, none of this paragraph is really true, but how many of you did a double take when you read the opening phrase? Actually, today's entry is going to be titled, "Package Day".

My Amazon shopping cart finally reached critical mass last week after over a month with no purchases, so in the interests of keeping the Internet clean and uncluttered, I hit BUY and had a bunch of useless but fun goodies delivered to my door. The packaging this time around was laughably bad, with one entire flap missing on top. This orifice was protected with one of those inflatable plastic cushions wedged in and quadrupled-taped with packing tape.

Among the new distractions in the BU household: 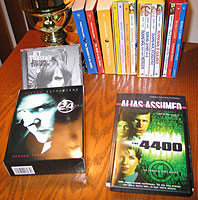 If any of these items interest you, let me know and maybe I'll write full length reviews when I've exhausted the stash.

One last 222 (submitted by Chris Li): In the movie, Office Space, Peter lives in apartment 222.

Sick sheep in a trash can