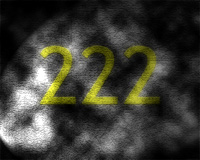 Happy 222 Day! As longtime readers are no doubt aware, 222 is mystical number that occurs frequently throughout nature. 222 was first discovered by scientists (or at least, computer science majors) at Virginia Tech, since the "trumpet house" (where delinquency-contributing parties were often held) was at 222 Janie Lane.

In those days, the tradition of Forty Friday was a weekly occurrence, and band members would regularly stumble to Marching Band practice following a meeting of their lips and a bottle of alcohol with the specified number of ounces. As time went by and the number of 40s increased, the band director decided that alcohol had a negative effect on a band which was already incapable of marching and playing an instrument at the same time (or in many cases, incapable of doing either one individually as well), and frowned heavily upon the tradition. In its place, a new tradition arose, Two 22 Tuesday, which was just like Forty Friday but involved four extra ounces. This was safer, because the alcohol was divided between two bottles, and everyone knows that smaller packages never have as much food in them as an equivalent larger package

Here are some other places where 222 can be found in daily life:

What's going to happen on 2/22/06? Will I get married? Will someone get pregnant? Share your own occurrences of 222 or remind me of any that I missed in the comments section!

No new LOST tonight -- you'll have to wait until next week.

LA under attack by a mysterious blob

Infamous Email Writers Aren't Always Killing Their Careers After All