Happy Singles-Awareness Day! There's a big bowl of Valentine's Day candy on my desk at work if you want any. Pay no attention to the fact that it's been there since Halloween -- Jolly Ranchers are the ancient Greek candy of love, and Hershey's Kisses are inherently smooch-themed anyhow. You also won't find any gross powdery-tasting conversation hearts in my bucket -- the only way they'd ever be good is if they were made out of Sweettarts. 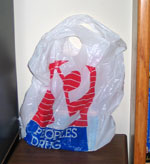 When I was in elementary school, we were required to create little valentine receptacles out of construction paper and hang them along the underside of the chalkboard. Then, the entire class would get up en masse and distribute cards to the rest of the class. The main rule was that if you made a valentine for someone, you also had to make one for each person in the rest of the class. So no one would feel left out, teachers would distribute class rosters to all the parents in the week before. For Valentines 2006, I dug into my file cabinet for the Big Bag Of Valentines, containing all the cards and letters from twenty-five years of holidays, birthdays, and graduations. You can tell the bag is old because it came from Peoples Drug, a pharmacy that sat in strip malls in the late 80s next to Trak-Auto and Dart Drug.

Last November, I wrote about Jesse King and his amazing Origami Valentine skills

. Here is the card he sent to every single person in my first grade class.

In second grade, cards with Garfield on the front seemed to be all the rage. I can't even remember what kind of cards I gave to people, but they were probably on sale with a Limit of 6, please, and I probably used the same cards every year since we had bought them in bulk by going in and out of the store multiple times. 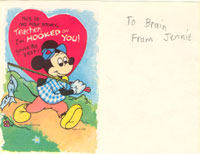 I got this valentine from my friend Jennie in second grade. It says, "This is no fish story, teacher, I'm hooked on you! You're the best!". I', pretty sure I wasn't the teacher, but then again, there are a lot of things I don't remember about elementary school.

The Valentine folder-stuffing tradition lasted until 3rd or 4th grade, after which they phased it out in favour of chasing girls on the playground. Apparently the childhood ego becomes strong enough that it doesn't require state-sanctioned card distribution in 4th grade.

This next one isn't exactly a valentine, but I found it in the bag and had to post it.

In third grade, I did a book report on The Mouse and the Motorcycle by Beverly Cleary. As part of the report, I wrote a letter to the author, asking if she would come to my school and read to us. The fact that she lived in Washington state pretty much made my request useless, but now I can say that I have an autographed postcard from a famous author. When times are tough and my house (which I have now owned for exactly two years) is about to be foreclosed, I plan on selling the postcard on eBay for several thousand dollars.

Video gaming is as useful as bilingualism

Jesus, or maybe a spider, appears on a pancake