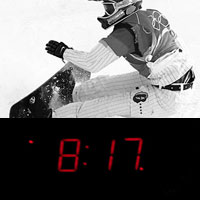 Ugly people are a drag on society

When you can't scare anyone with a blow torch, it's time to turn yourself in

You'd think people would learn their e-mail lesson by now