Back in Florida, I used to go to Blockbuster and rent a bunch of movies and then watch them all back-to-back over particularly slow weekends. Since it'd been awhile since I last did this, and since there were actually a few movies I was interested in seeing this month, I decided to make this weekend a movie weekend.

Wedding Crashers:
I was probably the last person in the United States to see this movie, which was buzzworthy last summer. I thought it was pretty good, if a little long-winded. The movie started out much funnier than it ended up, and you definitely need to be a Vince Vaughn fan (or at least be able to stand him for two hours). It was nice to see Bradley Cooper getting some movie work since his TV stuff (Alias and Kitchen Confidential) didn't really go anywhere.

Red Eye:
I rented this movie figuring it would be a low budget no-brainer suspense movie, but it turned out to be surprisingly good, and much better than I expected. Of course, there are plot holes as big as a moose, but Wes Craven does a good job of slowly ratcheting up the tension so you're on the edge of your seat by the end. Of the two airplane suspense movies from last year, I'd say Flight Plan is the better story, but Red Eye is more fun to watch. This movie concluded Rachel McAdams night on Friday. 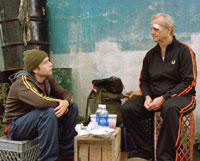 Broken Flowers:
"A miracle! Very, very funny! One of the best films of the year." - Ty Burr, The Boston Globe

Ty Burr can kiss my ass. This is a horrible, horrible movie -- it's like someone decided to take the worst pieces of Lost in Translation and turn it into a mental laxative, and it's not funny in the least bit. Roughly 75% of the movie involves dialogue-less scenes of Bill Murray looking around and thinking, or Bill Murray driving through the countryside with bad jazz playing on the radio. I bravely watched it to the end, solely because I wanted to see what the point of the movie was, and (unforgivably) there is no closure. The movie just fades to black without a hint of resolution, which in many cases can be argued as artistic. In this case, the movie is just pretentious -- there have been movies which I didn't "get" but which I could appreciate, but this is a movie that movie-geeks will smile and nod about as if it's the deepest movie of modern times even though there's more filling in a Swanson pot pie.

About halfway through the movie, I started fast-forwarding through all the thinking/driving scenes and shaved fifteen minutes off the running time. 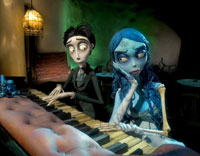 Corpse Bride:
This is the latest claymation movie from Tim Burton. Running at barely 80 minutes, the movie is very neat to watch for the effects, but as a movie it's not that great -- Nightmare Before Christmas was much better and had catchier music. The characters in this movie are typical fun-loving clay personalities, but things are a lot more threatening-looking than the previous movie. Small children would probably get pretty scared watching this.

Australia is the new guillible country