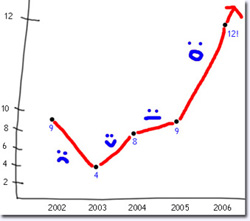 , predictions made with such accuracy that the Academy called yesterday and told me to just fax over my '07 list so they wouldn't actually need to vote. As I sat down to write this year's list, I realized that I have absolutely no interest in making a sixth sequel in this series and would sooner lick a dog's nose than write all the HTML needed to format a list of movies.

Not every tradition or saga needs to be held in perpetual perpetuity, and some, like another Rocky movie or shaking your keys on the third down in college football, should be gently led out into the retirement pasture and shot down gangsta-style. Trust me, as I am an authority on this style, which generally involves replacing the -er syllable with an -a on any noun that performs some action (i.e. playa, rappa, bass fishaman).

So with the Oscas off of the agenda, I suddenly had a week with no real updates mapped out. I decided to make them musically-inclined -- Tomorrow will probably be a Musical Musings Day, and Thursday will be an Audience Participation Day where you get to be the Barrymore to my Grant and write lyrics to a melody I provide. The fun never ends in the URI! Zone, unless I forget to pay my hosting bill this year.

: This is a more advanced, hardkore use of gangsta-style.

Sorry for the delay in getting this posted -- yesterday afternoon I took a trip down to Manassas to visit Anna & Ben and parked in a visitor spot next to an ice-hump long enough to make any randy Eskimo happy. By the time I was leaving around 10 PM, someone had parked behind me, and I didn't have enough momentum to get out of my spot without the risk of hitting the guy in front of me. So with my car being a principal character on the Car-Tomb Network, I was forced to spend the night in one of Manassas' many crack dens, next to a doerdoa named Alfredo and a hobo who thought it was the Greyhound station.