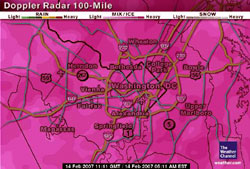 Similar to the way the Chicago River is dyed green every St. Patrick's Day, The Weather Channel pulled some meteorological strings to paint the D.C. metropolitan area a pasty shade of pink for Valentine's Day. It's a pretty good marketing ploy, and I predict that it won't be long until we see the Pepto-Bismol company become the permanent corporate sponsor for the holiday.

They must have underestimated the amount of pink dye it would take to coat the entire area, because it was all white by the time it reached my house (then again, everything is whiter in Loudoun County, the county with the fastest growing yuppy population in northern Virginia, and soon the entire world). When I got up this morning, I was greeted with a driveway trifle consisting of a layer of ice, a layer of snow, another layer of ice and a final layer of snow (and then a layer of beef sautéed with peas and carrots).

After watching my neighbour's car roll back down the sloped driveway, I wisely decided to work from home for the second day running. It really doesn't take much to convince me of the power of telecommuting -- besides, my home computer is faster than my work computer and the monitor's bigger too, so I get far more accomplished and save $1.22 on commute gas, which goes towards noble causes like the Popeyes Fund for Deprived and/or Depraved Individuals.

Around 2 PM, I tramped outside to shovel the driveway before it had a chance to refreeze overnight. I attacked the snow/ice tag team (hereafter called snice, which incidentally is also the way you say something is nice in Tallahassee) with verve and vigor. Occasionally I had to use the snow shovel like a pick-axe on the more troublesome spots, but the driveway was finally clean after about two hours of heavy labor. My back will be feeling it tomorrow though -- it's times like these that I wish I could make copies of myself to do all the work for me.

Plus, I could call them my ice-clean clones!

"I will certainly jump. It's what I do. I love it," Holmes said.

Large squid lights up for attack