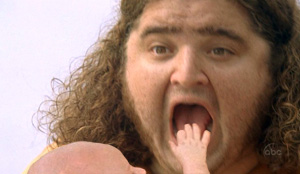 When we last left the show, Locke was talking to Hurley on the cliffside, trying to convince him that Claire's baby was neither delicious or nutritious, and that the island was merely making him see a crispy chicken sandwich. 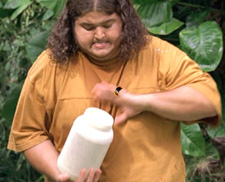 Last night's episode picked up right where we left off, with Locke failing to calm down an increasingly unstable Hurley. Out of ideas, Locke removes a tub of Dharma Initiative ranch dressing and makes a trade. Hurley collapses to his knees in tears and then proceeds to down the entire tub of ranch dressing, only to discover a prize in the bottom -- a Dharma Initiative decoder ring made up of concentric rotating circles with the Numbers.

Meanwhile on the other side of the island, Sawyer faces down a massive army of attack penguins by shooting their leader with the air marshal's handgun, causing the others to scatter. Upon closer inspection, the dying penguin has been tattooed with a Dharma sign that the audience has never seen before: The Muffin. The Muffin turns out to be a geodesic bakery behind yet another hatch, where Dharma scientists experimented with utopian confections such as the Apollo candy bar.

Before Sawyer can explore the new hatch too deeply, he is kidnapped by the Others. In the final minutes of the episode, it is revealed that the Others are a band of modern day contestants from the show Survivor, and the survivors of Oceanic 815 are actually all dead in purgatory, but don't realize it. The Others are actively trying to make the 815ers realize they're dead so they'll leave the island for good, led by Juliette (played by Nicole Kidman).

The episode closes on a silent image of Walt, now 23 and too far beyond puberty to pretend to be a 13-year-old boy any longer, stepping out of the jungle and onto the beach.