In the spirit of Valentine's Day, we are now selling frozen turkey hearts to interested visitors. The first ten to act will also receive other assorted giblets, like the liver and gizzard. Please make checks payable to The URI! Zone (refrigerated shipping extra). And now, on with the show!

Capsule Review Day
(there are no spoilers in these reviews)

Idiocracy
After some initial hype, this movie seems to have skipped the theatres completely, probably because of the premise that corporate entities like Costco and Carl Jr.'s have taken over the world five hundred years in the future. Written by Mike Judge, the creator of Beavis and Butthead, King of the Hill, and Office Space, this movie satirizes the dumbing down of modern society in the same way that his previous movie satirized office jobs. It's light on substance, but fun enough to watch once, and Luke Wilson is his usual harmless self in the lead role. The biggest problem with this movie (and to a lesser extent, Office Space) is that while Judge makes some hilarious observations about his subject matter, he's not quite as good at stringing them all together in a meaningful storyline. This movie probably would have been better as a series of brief skits on MadTV rather than a feature length film.
Final Grade: B-

Unknown
I'd never even heard of this movie until I walked into Blockbuster, despite its all-star cast

, but I was pleasantly surprised. Five men wake up in a locked warehouse with no memory of who they are or why they're there. From these contrived Saw-like beginnings, a tightly-drawn psychological puzzle emerges when the five realize that a kidnapping went south, with two of them being the kidnappees. They've only got a couple hours to escape or figure out who the bad guys are before the rest of the kidnappers return with the ransom. The plot drags a little whenever they cut to the outside world (a subplot of cops chasing the other kidnappers), but overall it's an effective Memento-style whodunit. The final-final twist is a little too clever and probably unnecessary, but it's still a fun way to end the movie.
Final Grade: B+ 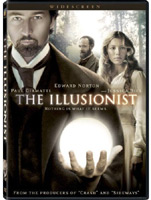 , I usually tend to avoid any movie that looks like a period piece. I'd sooner listen to Rasputina's remake of Led Zeppelin's Rock and Roll on infinite loop

than watch Kirsten Dunst prance around as Marie Antoinette. I picked this one up only because I know Edward Norton could win an Oscar for his role as a nanoparticle in the movie adaptation of Prey, and had a blind faith that he could save this movie. Don't let the turn-of-the-century trappings scare you away from Illusionist: it's not a period piece; it's just a very well-done movie that happens to be set in a period. The movie's both engrossing and fun and the performances are top-notch throughout, even with "That Sideways Merlot guy" as the head of the police.
Final Grade: A

24 - Season Four
Out of the first four seasons of 24, this could be the least annoying season ever. This is a high accolade in my book

, and shows that the writers of 24 are getting better at exploiting the formula every season. Thankfully, the most annoying actress from previous seasons is no longer on the show, and there are some great new introductions, like the perfectly-detestable indecisive Vice President. The season peters out a bit at the end, but the overall pacing is tight, and cougar storylines are kept to a bare minimum.
Final Grade: A-

24 - Season Five Prequel
As an extra, the DVD sets like to include mini-prequels, ten minute episodes not shown on TV that bridge the gap between seasons. The season four prequel was mildly entertaining, but this one was horrible. It was essentially a ten minute commercial for Toyoto which involved Jack Bauer driving around a lumber yard. Not since Alias has there been such a pitifully disguised product placement

Maker of large omelet on I-66 vanishes

Family fun when you don't have much money