the red-headed stepchild of American literature 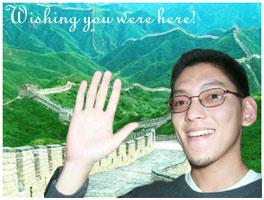 ♣ My week of vacation time is coming to an end, and I didn't have as much time to play Where In The World is Brian Uri! as I would have liked, but I still think the week off was a success. I was just returning from a day trip to the Great Wall of China when I realized that this weekend is the third anniversary of buying a house and living in Sterling.

♣ This also means that I've been out of grad school for almost four years. In celebration of four years of real life without bankruptcy, illegitimate children, meth habits, or gang initiations involving loss of digits, I will eat Popeyes for lunch today -- two piece meal, dark meat, mild, with fries, no drink.

♣ I also added a subtly artistic blue background to the URI! Zone, a pleasantly understated callback to the early days where the site was all about blues, blacks, and llamas. I thought about redoing the banner as well, but ever since I first drew the URI! logo in 1997, I've been unable to resketch it as perfectly. 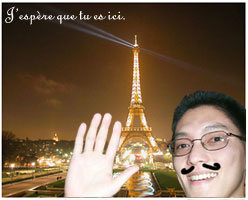 ♣ On Wednesday while sightseeing in Paris, I received an e-mail from the long-lost Jim Barry by electronic carrier pigeon (pigeon voyageur d'électronique in France), informing me that he still visits regularly, but has had laptop troubles recently.

♣ This made me wonder (got me to wonderin' in Tallahassee) how many regular lurkers I have here that visit but remain under the radar. If you are such a misanthrope, post a comment today with your name, rank, serial number, and whether you like long walks on the beach. I might just use your census data to write about things that you care about instead of my usual drivel! If you choose not to answer, one of my not-so-shy regulars may have to resort to census acts of violence (*click click* OW in Zulu).

♣ When are acts of violence not senseless? 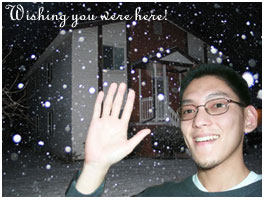 ♣ Now that my whirlwind tour of foreign countries has come to a close, my remaining vacation days will be spent close to home, finishing up the office renovations and catching up on movies and games. Monday is the day I return to work (and also 12 of 12), and Tuesday is the day after the day I return to work. I have no plans for Wednesday yet, but if my superhero cape comes back from the cleaners in time, there just might be some "throwing down" involved.

Oh, Naked Stock Photography Guy, what have you done this time?