"I can't say I know exactly how a victim of a sexual assault feels, but I think it's something like this -- they invaded my home," Washington said. 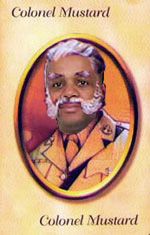 I'm sure there are worse ways to defend yourself when you have a history of short-tempered outbursts and shoot the guys delivering your furniture, but it'd be hard to top this one. After remaining silent for thirty days following the shooting, the best that homeland security officer, Colonel Keith Washington, and his lawyer could come up with was "They raped my house"?

To be fair to Washington, he at least tried to come up with some details, such as "One of them hit me with a lead pipe". However, any reasonably educated American who has ever played the game, Clue, knows that you can't invoke the lead pipe unless the pipe is in the same room. It's not even clear from the news reports if the pipe was ever found or if Washington had a pipe-shaped bump on his head.

Three CD players hidden under a cathedral's pews blared sexually explicit language in the middle of an Ash Wednesday Mass, leading a bomb squad to detonate two of the devices.

Detonating a CD player spouting filthy lyrics will surely teach it a lesson, but it seems like overkill to me. Why did it they have to incinerate two of them before realizing that the third was harmless? This sounds like a case of a very bored bomb squad that hadn't gotten to blow anything up in a long, long time (which incidentally puts an ironic spin on Ash Wednesday).

In fact, this would probably be a good way for the now predictable show, COPS, to generate some ratings numbers: At the beginning of any chase, the cops warns the perp (via a bullhorn) that if they get caught, they'll have to pick from three mystery prize boxes. One of the boxes has a Get Out of Jail Free card which will allow them to walk. The second is empty, and the perp gets taken into custody. The third box contains a bomb. Good old-fashioned American hilarity ensues.

Animal control authorities are not amused by a fast food chain's marketing stunt encouraging customers to dress their cats in a special take out bag.

I think my position on these atrocities is already well-established.

Lawmaker comes down on plastic gonads

Land of the All-Night Gas Line