♣ To capitalize on the success of my new state song (it's a foregone conclusion that mine will be picked since I know a former Mayor), I have also written the marching band arrangement, a crucial piece of any pre-game show

(560KB MP3). I am also in talks with Wynton Marsalis to record a series of technically perfect but emotionally uninteresting jazz solos over the chords, to be placed on a CD and sold at Starbucks. At the very least, this should start to build public recognition of my work. 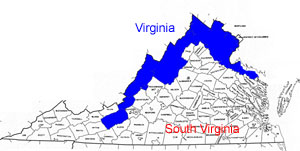 ♣ So I don't get added to a list of dissidents, I would like to state that I don't necessarily endorse Northern Virginia seceding from Virginia At Large. However, here is how it should go down if it ever happens: The new state capitol would be Alexandria. We would get the state schools of Virginia Tech, James Madison, and George Mason, part of the Shenandoah Valley for tourism purposes, and all the counties along the Potomac River. We would also keep the name Virginia. South Virginia would get UVA, Virginia Beach, Hampton, King's Dominion, Busch Gardens, the entire Eastern Shore and cockfighting. This is a ridiculously fair trade -- why didn't anyone think of it sooner?

♣ We would also be The Seahorse State because our boundaries kind of look like an anorexic seahorse, if you rotate it twenty degrees counter-clockwise.

. Harry wants people to stop thinking he's Harry Potter, so he's mixing things up with this role. Actors are always afraid of getting typecast -- if I were one of the Mr. T's or Gary Coleman's of the world, I would milk my one-note wonder for all the money it was worth and then retire at 29. 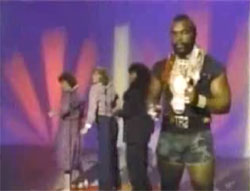 ♣ I've posted this before, but it deserves another mention since it's Friday: Mr T. sings "Treat Your Mother Right"

. Are you treating your mother right?

It will make the mud tired. We're killing the mud softly.

That question isn't about hair.