♣ I finally finished cleaning out my file cabinet yesterday after work. I tried out a new system -- instead of carefully and meticulously filing anything and everything I've ever owned, I removed all the bills and receipts older than three years old (The old artwork and drawings I kept for slow days where I can write more in the "What's In My Messy Drawers Day" series). This weekend, I'm going to purchase a little shredder.

♣ I used to just take all my identity-theftable paperwork to the office to shred, but the ten-year-old shredder there can no longer slice up a voided check without a horrible jam which then requires you to squirt oily goop into the blades every five checks. Squeezing giant condiment bottles seems worthless to me unless the end result is a hot dog.

♣ The 250 checks I ordered four years ago have finally run out, which means that I no longer have to cross out my Centreville apartment address anymore. It'd be nice to do away with checks completely, but to me, some bills (like the mortgage) really shouldn't be left to automatic online payments. 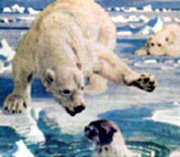 ♣ A group of multinational Arctic scientists crosses the tundra in search of two missing colleagues, a Czechoslovakian and a Turk. They find two polar bear mates raiding the mens' campsite and shoot them down. After cutting open the female bear and finding the body of the Turk, one scientist says to the other, "The Czech is in the male."

♣ Speaking of mail, I'm expecting a bundle of joy soon. It's not so much a baby as it is an Amazon.com package with two new Cardigans CDs, a single-bound volume containing all fifteen books from the Wizard of Oz series, a Gameboy DS game, am anthology with a new short story by Janny Wurts, and a reprint of Zilpha Keatley Snyder's The Egypt Game, a children's book from my past.

♣ I reread Eyes in the Fishbowl by Snyder this week. I first mentioned this book in my Authors of Yesteryear featurette in 2002

, and I still gravitate back to it every couple years to see if I can understand it any better. It's a great story, but the ending is either abrupt, just plain confusing, or was translated into Russian and back to English four times by Babelfish. Anna's reading it now to see if I'm just dense, which also gives her a chance to take a break from her insane "I will reread the entire Harry Potter series continuously until the 7th book comes out in July" cycle. 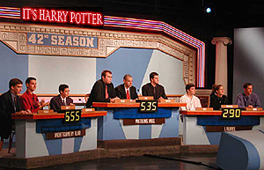 ♣ I can't say that I never reread my favourite books, but restarting Book One immediately after finishing Book Six is an exorbitant amount of Harry Potterness. I honestly didn't realize it was possible to love Harry Potter more than Paige, who could easily be a member of the winning team on It's Harry Potter.

♣ I have no big plans this weekend -- I'll probably get a little shopping done on Saturday and then record a series of "Learn Sign Language" books on tape on Sunday. Have a great weekend!

Study required to find out why kissing your sister is gross

Young women even have phrases for couples, frequently spoken with a touch of derision: They're "joined at the hip," or "married."